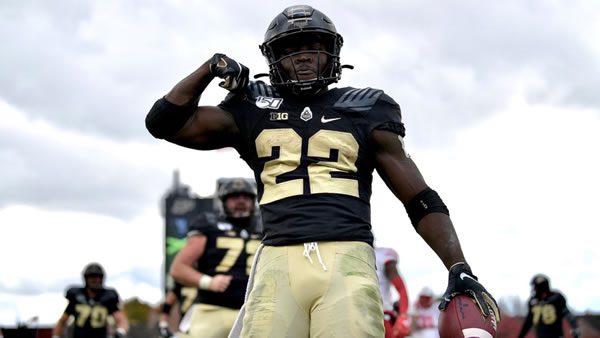 Where: Ross-Ade Stadium, West Lafayette, IN

Point Spread: IU +15/PUR -15 (Opened at 15 at Bookmaker - One of the two oldest books on the web. Takes bets up to 50K and pays FAST! This is the bookie for the conservative bettor who absolutely has to have 100% trust and doesn’t care about frills.)

The Indiana Hoosiers head into the final game of their season with a 2-9 record. Last year the Hoosiers had an impressive 6-1 record in the shortened 2020 season but had dealt with injuries in the quarterback room this year. The Hoosiers haven’t seen a win since week 4 of the season, and as of late, have amounted to just 24 points of offense over their last three games. Indiana ranks outside the top 100 offensively, averaging just 297.7 yards of offense per game and 18.2 points per game. On defense, they give up 378.5 YPG, which is 68th in the nation.

The Boilermakers enter this week with a 7-4 record. Purdue will be bowl eligible this year, surpassing the six-game win mark. After being dominated by Ohio State, they got the win last week over Northwestern 32-14. Purdue’s most notable win of the season is their upset win over #3 Michigan State 40-29, though beating #2 Iowa on the road 24-7 is equally as impressive. Purdue averages 421.8 YPG on offense and has a Top 50 defense that gives up 354.1 YPG.

As Purdue hosts their last home game of the season, a factor that has played in large part to their success this year is their defense. After being tested in the past few weeks by the offenses of Ohio State and Michigan State, Purdue has the chance to pitch a shutout against an Indiana offense that has scored just seven and three points in two of their last three games. With Indiana missing QB1 and QB2 listed as “questionable”, the Purdue defense, which allows less than 200 yards through the air, will force Indiana to run the ball. With Indiana’s leading rusher, Stephen Carr, questionable with an ankle injury, the Hoosiers will be without two of their best playmakers against one of the best defenses in the Big 10. If the Purdue defense can hold the Indiana offense under 10 points, this gives them the best chance to cover the spread.

In a game with a spread of 15 points, what happens in the red zone can make or break covering. The Indiana Hoosiers come into this game outside the Top 100 offenses in the red zone with 34 attempts leading to only 18 touchdowns on the season. Facing the Purdue defense will prove to be a tough test as they’ve allowed just 19 touchdowns in 38 trips. I see the Purdue defense only allowing a few trips to the red zone throughout the game and giving their offense short fields to work with. If Purdue only allows one touchdown in the red zone in this game and holds any other trips to field goals or takeaways, the offense is going to run away in this one.

Coming off last season where the Hoosiers took Ohio State to the ropes, the closest they’ve come to a ranked team was 5 points against Michigan State earlier this season. In all losses this season, Indiana has lost by an average of 24.6 points. Also worth noting is the Hoosiers 1-4 record on the road this year and Purdue having a winning record at home. If you’re Purdue, a win over Indiana is far from their upset wins on the year but would end their season with an exclamation point.

Saturday’s matchup will be the first time these teams have played since 2019. In that 2019 game, Indiana won 44-41 in double overtime. Looking back a few more seasons, the Boilermakers have won two of the last three games.

How the Public is Betting the Boilermakers vs. Hoosiers

75% are betting the Boilermakers to cover the spread.

The Indiana Hoosiers are 0-4 ATS in their last four games against Purdue.
Over is 6-0 in the previous 6 meetings between these teams in Purdue.

The Indiana Hoosiers have a tall task heading into Purdue to try and get their third win on the season. Without your top two quarterbacks and best running back against one of the nation’s best defenses, the odds aren’t looking in your favor. While 15 points is a large spread for any team to cover, I believe that the Purdue defense will hold the Indiana offense to few if any points on the day. Take the Purdue Boilermakers to cover the 15-point spread. The Over/Under in this game is also worth looking at with a 50.5-point total. The confidence I have in the Purdue defense means that the Purdue offense would have to carry the load to give the over a chance to hit. While I see a lopsided Boilermakers win, I don’t see an offensive onslaught. Take the under on the 50.5 total. Question: Ever heard of “reduced juice?” We highly recommend taking a minute to learn it, because it-is-your-friend!