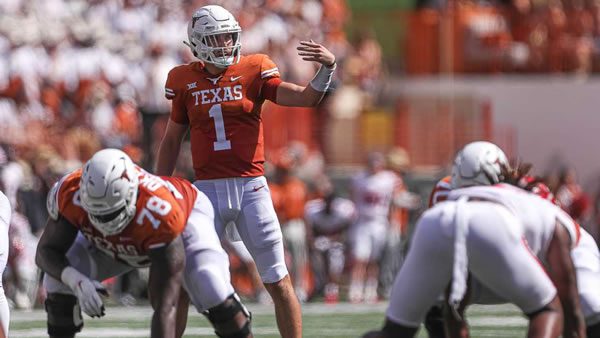 Point Spread: Cyclones +15/Longhorns -15 (Bovada – Best live betting platform on the web, 50% real cash bonus, rebates on ALL your bets; win or lose! FAST crypto payouts! What more could you ask for?)

The Cyclones come into the game with an overall record of 3-3. This includes going 0-3 in Big
12 action. This season, the Cyclones have been favored in 3 games while posting an ATS mark of
2-3-0. Their average over-under betting line is 39.08 leading to an over-under record of
2-3-0.

So far, quarterback Hunter Dekkers has a passer rating of 91.18 while completing 153 of his
227 attempts. Currently, he has a total of 1514 passing yards. Wide receiver Xavier Hutchinson,
has come up with the most production for the team, with a total of 604 receiving yards. The top
option in the run game for the team is Jirehl Brock, who has carried the ball 78 times for a
total of 394 yards.

This year, Longhorns have an overall record of 4-2. In addition, they have also played well in
the Big 12, going 2-1. This season, the Longhorns have been favored in 4 games while posting an
ATS mark of 4-1-0. Their average over-under betting line is 51.42 leading to an over-under record
of 2-3-0.

In their previous game, the Longhorns picked up a 49-0 home win over Oklahoma. This was an
impressive victory as they were also the 7.5 point underdogs. In the game, Texas finished with 4
touchdowns through the air while throwing for 289 yards. The team ended the game with 3 rushing
touchdowns, along with a total of 296 yards on the ground.

Hudson Card heads into the game as the team’s top quarterback, with a current passer rating of
110.46 on a total of 923 yards through the air. Xavier Worthy leads the team’s receiving corps
with 24 catches for a total of 360 yards. The Cyclones have turned to running back Bijan Robinson
a total of 110 times for a total of 645 rushing yards.

Against the spread, the Cyclones have gone 3-7-0 over their last 10 games. Straight up they
have a record of 4-6-0. On average, the team scored 25.9 points while allowing 18.5, leading to a
positive scoring differential.

Through their last 5 road games, Iowa State has an ATS record of just 1-4-0. However, their
overall record was 1-4-0 while averaging 22.2 points per game.

Texas has played well in their previous 5 home games, going 4-1-0 straight up. In this
stretch, they averaged 34.4 points per game while allowing 17.4. The team has also performed well
vs the spread at 5-0-0.

Heading into this week’s matchup, the Cyclones will look to improve their offensive output, as
they are ranked just 103rd in the NCAA in points scored.

Although Iowa State has struggled to move the chains on 3rd down throughout the season, they
have a chance to take advantage against a Texas defense that is allowing an average of 17.83
points per game and has had its problems getting off the field on third down.

So far, the Iowa State offense is averaging just 106.33 yards per game on the ground. This
production has come on an average of 31.67 rush attempts per game (108th). This week, the
Cyclones will be facing a Texas defense that is ranked 50th in rush yards allowed per game. So
far, they are averaging 56.67 yards per game when facing top 25 rush defenses.

The Cyclones will look to once again play well defensively, as they are currently 8th in
points allowed at 13.67 points per game allowed.

So far, the Longhorns are averaging 38.83 points per game on offense, which is good for the
20th most in college football.

In this week’s matchup, Texas has a matchup against an Iowa State defense is giving up 13.67
points per game and has done a good job getting off the field on 3rd downs, allowing opponents to
convert at a rate of just 28%. This presents a problem for the Longhorns’ offense, as they are
one of the worst performing team’s on 3rd down this season.

Although the Longhorns have turned to the passing attack at a below-average rate this season,
they have an opportunity to find success through the air vs an Iowa State defense allowing teams
to complete passes at a rate of 64.17%.

This season, the run game has not a big part of the Texas offense, as they are averaging just
35.0 attempts per game. With their limited opportunites, they have an average of 178.0 yards per
contest, good for 47th in the NCAA. This week, the Longhorns will be facing an Iowa State defense
that is 11th in rush yards allowed per game. So far, they have averaged 113.33 yards per game
when facing top 25 rush defenses.

Cyclones +15. You can make Iowa St. a +35 underdog by inserting them into a massive 20 point college football teaser at Wagerweb Sportsbook! They give you a fat bonus too!