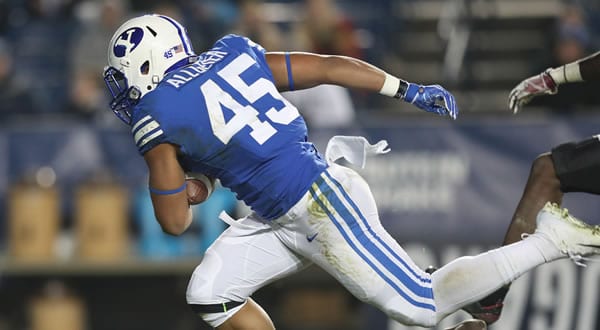 The Louisiana Tech Bulldogs battle the BYU Cougars on Friday in a battle of unbeatens in Provo. Both teams are 2-0, having each covered the spread in both of their wins. Each team has seen a game get postponed in a start-and-stop season that has been hard for everyone. Still, each has taken care of business. Both teams played on Saturday, with BYU handing out a brutal beating to Troy, 48-7. In two games, they’ve won by a combined score of 103-10, but figure to be tested to a greater degree this week against the Bulldogs. Louisiana Tech moved to 2-0 with a 66-38 win over Houston Baptist, which followed a nice season-opening road-win against Southern Miss. Who can cover the number in this Friday night special?

Can Louisiana Tech Stop the Cougars?

The Bulldogs have been a reliable winner in the Conference USA of late, coming off a ten-win season and starting fast this season. They don’t typically give up a ton of points, and only Texas surpassed 31 points against them last season. However, giving up 38 to the likes of Houston Baptist wouldn’t seem to bode well for L-Tech in this spot against an experienced BYU offense that hit the ground running this year.

Third-year BYU starter QB Zach Wilson has been exceptionally sharp through two games with a near 80% completion rate. Turnovers are typically a concern, though he has only thrown a single pick so far. Thick back Tyler Allgeier and experienced Lopini Katoa lead a strong run-game, while Wilson relies on dependable targets such as Gunner Romney and emerging Dax Milne. Their backs are useful through the air, too, and the receiver rotation is deep and productive. Unless Louisiana Tech is able to rediscover some of their prior fire on the defensive side of the ball, they might not be a road-defense that can appreciably curtail the Cougars. It just doesn’t look like the same squad that actually shut out Miami in a bowl game last season. You don’t want to base too much on a 28-point win over an FCS foe, but when Houston Baptist’s QB is putting 400 and five TDs on you, facing an aerially-capable BYU team might not be what the doctor ordered.

BYU has been really tough through two weeks on defense, allowing a combined two scores. Still, the Bulldogs’ offense offers a different look. Graduate transfer Luke Anthony is getting the lion’s share of the snaps at QB, throwing five TDs on Saturday. He has tools around him who know how to thrive in this offense, returning 1000-yard rusher Justin Henderson, RB Israel Tucker, and receivers Adrian Hardy, Malik Stanley, and Wayne Toussant. It’s a nice experienced core. They’re accustomed to putting up a lot of points.

But when a Conference-USA team steps up to face even a mid-level Independent like BYU, it’s important to calibrate the elevated context. Running up and down the field against Conference-USA doormats is great, but it doesn’t always translate at this level. Even the better teams in their conference can stymie this offense. And this isn’t the normal cheap-folding-chair BYU defense. Against a fast-paced Troy offense that scored 47 points the previous week, they were fierce, with good play-calling and big plays. Khyiris Tonga had two of the Cougars’ four sacks. They were able to get to the QB the whole game, and they did it the week before too, offering the promise that a “D” not known for pass-rushing can develop that component. Through two games, they’ve allowed a total of just 330 yards of total offense.

If you think this game has a funky feel, you’re not the only one. It’s not often you see a Louisiana-based football outfit playing in Provo. There isn’t any overlap or common threads. BYU plays a lot of different conferences, but not so much the Conference USA. They sort of operate in completely separate realms, making it highly speculative when forecasting a pairing between the two. Also, for those who fancy the Cougars, I’m not sure the first two weeks really helped the value in this game. We see BYU opening as big-sized favorites, as it’s clear the oddsmakers have taken note of the dominance the Cougars have showcased in the first two weeks of the season.

It’s hard to second-guess the oddsmakers, but I’m not sure two games are enough to either overly-celebrate the Cougars or relegate Louisiana Tech to the scrapheap. Granted, the Cougars have been dominant, while the Bulldogs have appeared to be imminently more-exploitable. But perhaps the Cougars come down to earth slightly this week against a more-together team. The Bulldogs are working with a new QB who will be tested against a playmaking defense, but this is a Skip Holtz-led squad that has been typically very competent, and I see them able to keep this one from getting too out of hand. I’ll take Louisiana Tech.

Loot’s Pick to Cover the Point Spread: I’m betting on the Louisiana Tech plus 24 points. Bet all your Week 5 NCAA football picks FREE by depositing $200 and getting $200 in free bets at MyBookie Sportsbook! One of the biggest and best on the web!