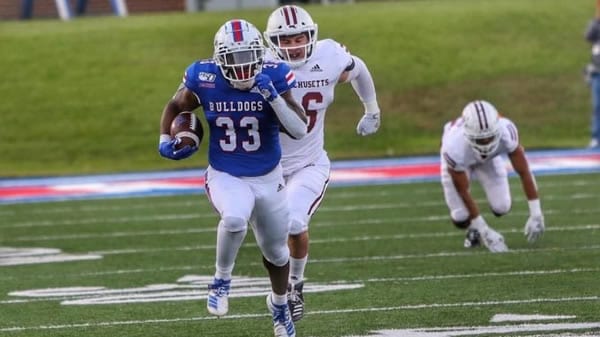 Louisiana Tech missed its first game of the season because of COVID cases, so this is the Bulldogs’ first opportunity to get on the field, without the benefit of a non-conference contest. Louisiana Tech very nearly won its third C-USA West division title last season but came up one game short because of a tiebreaker with UAB. However, as a senior-dominated team last year, there’s no guarantee that the Bulldogs can build off that success in 2020.

That’s especially true against Southern Mississippi, which has been a thorn in the Bulldogs’ sides for much of the past five years. Louisiana Tech finally broke through last year but hasn’t had much success at all in Hattiesburg, where it’s lost seven of its past eight meetings with the Golden Eagles. But this Southern Miss squad was nowhere near ready to play its opener, as it lost by 11 to a traditionally poor South Alabama squad and was never really in the game. This was supposed to be a squad led by experience, but the Golden Eagles looked like a team thrown off by the craziness of 2020. Can they find a way to bounce back and continue their mastery of Louisiana Tech at home?

How the Public is Betting the Louisiana Tech/Southern Mississippi Game

The line has moved a full point toward Southern Miss, jumping from -4 to -5. The total has been more elastic than the line, moving 3.5 points from 54.5 to 58.

Wide receiver DeMarcus Jones is questionable with a shoulder injury.

When Louisiana Tech Has the Ball

The Bulldogs had a fantastic offense at their disposal last season, led by quarterback J’Mar Smith, running back Justin Henderson, and wide receiver Malik Stanley. However, Henderson is the only one back from last year, as the other two have graduated. Aaron Allen appears to be the new man under center, but he’s not exactly long on experience, having thrown just 75 passes last season.

If he can adjust to being the starter, he’ll have plenty of tools to make the transition much easier. Griffin Hebert was the team’s leading touchdown grabber last year with six, and he’s only a sophomore. Last year, he burned the Golden Eagles on a 70-yard catch, and he’ll have to come up big again in this game. Throw in former TCU wideout Isaiah Graham, and there’s more than enough here to really trouble the USM defense.

The key will be Henderson, who rushed for 111 yards last year against the Golden Eagles and will need to lead the offense while the passing attack tries to get on the same page. Louisiana Tech’s offensive line should be better this season, which could create several holes in a defense that gave up 163 rushing yards last week.

When Southern Mississippi Has the Ball

Nobody will be happier to see most of the Louisiana Tech secondary move on from college than Southern Miss quarterback Jack Abraham. Last year, Abraham had a nightmarish game in Ruston, tossing four interceptions against the Bulldogs and only managing two offensive touchdowns in the contest.

He should be better this year, and he’ll likely be looking for Tim Jones, who hauled in six balls for 139 yards last week against South Alabama and caught five passes last year against Louisiana Tech. But beyond Jones, there’s not a lot here, and the Golden Eagles don’t have much of a running game to speak of. Frank Gore Jr. and Kevin Perkins didn’t do much against South Alabama, which isn’t exactly known for being a defensive force. If the ground game fails to get started again, Abraham will have to beat the Bulldogs through the air — and that could be difficult based on last year.

The totals moving higher is likely good news for astute bettors because, in this series, Hattiesburg is where offenses go to die. Over the past ten meetings, three of the four highest-scoring matchups took place in Ruston, while Hattiesburg has seen just one meeting in five go over 51 points. The average score between the teams in Ruston has been 58.4 points, but the average combined score in Hattiesburg has been a mere 44 points. Nor has the public figured out this trend; the past four meetings in Hattiesburg have all hit the under.

This series also lends itself to close games where the underdog has a reasonable chance to win the game outright. The underdog has covered in four of the past five matchups, and in 2017 and 2018, the underdog won the game straight up. The spread also hasn’t been kind to Southern Miss, as the Golden Eagles have failed to cover the spread in four straight games. Meanwhile, Louisiana Tech was a great friend to bettors last year, as the Bulldogs covered six out of their past eight and were 8-5-0 ATS last year, winning eight of their final 11.

The day is expected to be a pleasant one, with partly cloudy skies and the temperature at around 82 degrees. However, the field could be a problem, as the remnants of Hurricane Sally could leave Hattiesburg still drying out by Saturday. USM does have a turf field, and the drainage system will need to be at its best.

Southern Miss was not impressive against South Alabama, and the defense appears to still be having some real problems. I can’t see the Golden Eagles slowing down Henderson, and I didn’t like what I saw from the Southern Miss attack. The Golden Eagles have the better quarterback, but if he can’t find his receivers or control the clock, that won’t really matter.

Conversely, Louisiana Tech can control the clock and give its offense time to get settled and find holes in this defense. I’m going to take the Bulldogs and the points here, and I also want the under. Don’t forget to check out Sunday NFL picks!