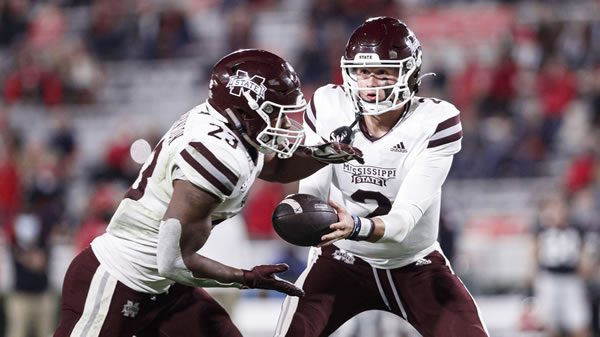 Point Spread: MSST +21/ALA -21 (Make MSU +41 or Bama -1 by inserting either into a massive 20 point NCAA football teaser at Wagerweb Sportsbook!)

It seems a ridiculous question given how Alabama has dominated Mississippi State in recent years, but could the Bulldogs finally be in position to give the Crimson Tide problems? After all, Tennessee and Hendon Hooker just undressed Alabama’s secondary and allowed the Volunteers to put up 52 points and 385 yards in the air. Given that Mississippi State loves to throw more than anyone, that should set the Bulldogs up to succeed against the Tide’s secondary, right?

Well, probably not. Unlike Tennessee and Josh Heupel, Mike Leach never does anything different. Once you know how to prepare for his offense, you’re always going to be ready for it, which is one reason why Alabama has never gotten into a shootout with Mississippi State in Leach’s two years in Starkville. So far, the Crimson Tide has outscored the Bulldogs by a 90-9 count, because Nick Saban knows what he’s going up against in the air raid. With Mississippi State coming off a loss to another smart coach who faces the Bulldogs every year — Kentucky’s Mark Stoops — it’s difficult to picture Mississippi State getting things fixed enough to handle Alabama, especially when the Tide have a great offense on their own that’s far less predictable than that of the Bulldogs.

How the Public is Betting the Mississippi State/Alabama Game

The public thinks this is a bit too much, as it’s backed Mississippi State and brought this down to an even three touchdowns from -21.5. The total has dipped from 62 to 60.5.

There is no guessing with a Mike Leach team. There is never any guessing with a Mike Leach team. The Bulldogs will throw it, throw it a lot and try to catch teams in bad matchups. When it works, it leads to a lot of points in a hurry. When it doesn’t, it leads to a lot of punts in a hurry. The Bulldogs do run the ball a little better than in past seasons with Dillon Johnson, but he’s probably not going to go much of anywhere against Alabama’s stiff run defense.

Instead, the Bulldogs will try to use Will Rogers the same way Tennessee did with Hendon Hooker. But that didn’t work against Kentucky at all, and it’s likely that Alabama is well prepared to deal with the air raid and embarrassed after giving up 52 points to Tennessee. Mississippi State is going to have to really make the matchups work in its favor if it’s going to find much of anything in the Alabama secondary this time around.

Bryce Young is back on his game, and that is big trouble for Alabama’s opponents. The Tide quarterback showed little signs of rust last time out in the loss to the Volunteers, as Alabama gained more than 500 yards of offense and really should have won the game if not for some spotty special teams play.

To increase the problem for Mississippi State, defense is really not how this team is built to win games. The Bulldogs have never shown any ability to stop Alabama under Leach or anyone else during their 14-game losing streak to the Crimson Tide, and now they’re facing a team that should come in ticked off and ready to play after last week. When Alabama is at its most focused and angriest, it’s got the most effective offense in the nation, and that’s exactly the situation the Tide have here. Whether it’s Young’s arm or legs or Jahmyr Gibbs on the ground, the Tide should be able to attack all game long.

More Picks: Get Dan’s Syracuse at Clemson Week 8 betting preview and pick against the spread

Mississippi State really needs to consider petitioning the SEC to open up the league slate with Alabama next year, because the Bulldogs are once again the unfortunate victim as the team to play Alabama after a Tide defeat. The Bulldogs have been the next team on the schedule following each of Alabama’s past two regular season defeats, and it’s gone about as well as you might expect, with Alabama winning 38-7 and 49-9.

Even without that, this rivalry has been one-way traffic for years, especially in Tuscaloosa. The Tide have covered in six of Mississippi State’s past seven visits to Bryant-Denny Stadium, and four straight overall. Points also tend to be at a premium in this matchup, as Alabama usually stops Mississippi State cold. The under has cashed in 17 of the past 22 meetings between the teams.

It’s going to be a little chilly as the evening ends, but it should stay nice for most of the day. Temperatures will start in the low 60s and eventually hit 49 by the end of the night, with winds blowing southeast at five miles per hour.

If Mike Leach ever had any surprises up his sleeve, I’d be tempted to take Mississippi State and the points here. But with the Bulldogs predictable as ever and Alabama coming in ticked off, I don’t really see this going any other way than an Alabama blowout.