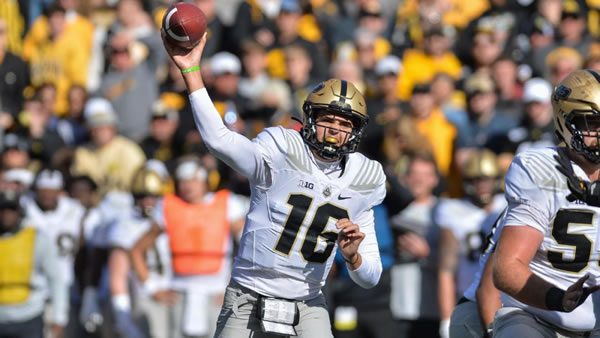 Point Spread: Cornhuskers +13/Boilermakers -13 (Make the Huskers a +33 underdog or the Boilers a +7 underdog by inserting either into a massive 20 point NCAA football teaser at Wagerweb!)

The Cornhuskers finished last season with an overall record of 3-3. In their 3 Big Ten games,
they went 2-1. This season, the Cornhuskers have been favored in 4 games while posting an ATS
mark of 1-4-0. Their average over-under betting line is 48.67 leading to an over-under record of
2-3-0.

The Cornhuskers are going for another win, as in their last game, they defeated Rutgers,
despite entering as the betting underdog. In the win, Nebraska completed 64.9% of their 37
passes, 2 of which resulted in touchdowns. In the rushing game, the Cornhuskers did not find the
endzone, while finishing with a total of 72 yards on the ground.

So far, quarterback Casey Thompson has a passer rating of 94.14 while completing 118 of his
180 attempts. Currently, he has a total of 1497 passing yards. Through the air, the team will be
looking for a big game from leading receiver, Trey Palmer. On the season, he has caught 40 for
544 yards. The Cornhuskers have turned to running back Anthony Grant a total of 133 times for a
total of 647 rushing yards.

The Boilermakers come into the game with an overall record of 4-2. This strong play includes
going 2-1 in Big Ten action. This season, the Boilermakers have been favored in 1 game while
posting an ATS mark of 2-3-0. Their average over-under betting line is 47.17 leading to an
over-under record of 3-2-0.

In their previous game, the Boilermakers picked up a 31-29 home win over Maryland. This was an
impressive victory as they were also the 3 point underdogs. In the game, Purdue finished with 2
touchdowns through the air, while throwing for 360 yards. The team ended the game with 2 rushing
touchdowns, along with a total of 13 yards on the ground.

The team’s leading quarterback is Aidan O’Connell, who comes into the game with a passer
rating of 95.78 on a completion percentage of 66.7%. Through the air, the team will be looking
for a big game from leading receiver, Charlie Jones. On the season, he has caught 50 for 603
yards. The top option in the run game for the team is Devin Mockobee, who has carried the ball 50
times for a total of 275 yards.

The Cornhuskers come into this week’s game having covered just 30.0% of their last 10 games.
Their overall record in these games is just 3-7-0. They have a negative scoring differential in
these games by averaging 26.0 per game and allowing 29.3. Their last 10 over-under record is
4-6-0.

Although Nebraska has a straight up record of 1-4-0 in their last 5 road games, they have not
held up as well vs the spread going 3-2-0. The team averaged 20.2 points per game in these
games.

Purdue has played well in their previous 5 home games, going 4-1-0 straight up. In this
stretch, they averaged 41.4 points per game while allowing 22.6. The team’s also performed well
vs the spread at 3-2-0.

Heading into this week’s matchup, the Cornhuskers will look to improve their offensive output,
as they are ranked just 78th in the NCAA in points scored and will be tested against a Purdue
defense allowing 22 points per game. If the Cornhuskers are going to find success, they will need
to continue to perform well on third downs as they are converting at a rate of 48.0%.

Although the Cornhuskers have turned to the passing attack at a below-average rate this
season, they have an opportunity to find success through the air vs a Purdue defense allowing
teams to complete passes at a rate of 58.1%.

Although Nebraska is ranked 25th in attempts per game, they are averaging just 160.17 rush
yards per contest. This output places them 62nd in the NCAA. This week, the Cornhuskers will be
facing a Purdue defense that is ranked 27th in rush yards allowed per game. So far, they are
averaging 164.5 yards per game when facing top 25 rush defenses.

Heading into the game, the Boilermakers are ranked 49th in points per game.

Although Purdue has struggled to move the chains on 3rd down throughout the season, they have
a chance to take advantage against a Nebraska defense that is allowing an average of 29.33 points
per game and has had its problems getting off the field on third down.

So far, the Purdue offense is averaging just 120.67 yards per game on the ground. This
production has come on an average of 31.0 rush attempts per game (115th). This week, the
Boilermakers will be facing a Nebraska defense that is ranked 144th in rush yards allowed per
game. So far, they are averaging 210.0 yards per game when facing defenses ranked outside the top
50.

Nebraska +13. Bet your Week 7 college football predictions for FREE by scoring a 125% real cash bonus up to $400 when you use bonus code PREDICTEM at GTBets Sportsbook! They’ll give you a free half point everytime you bet your favorite teams too!