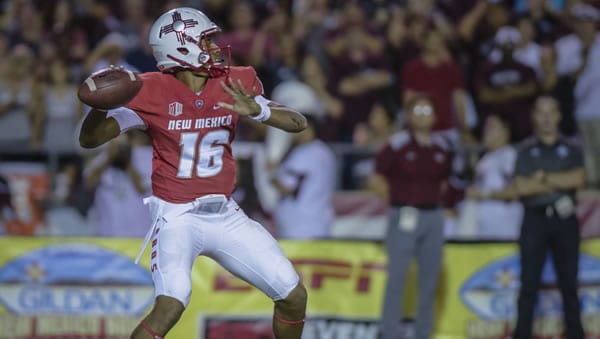 The New Mexico Lobos come to Colorado for a Friday night Mountain West battle with the Air Force Falcons. The Falcons are trying to get back into the season’s swing after seeing their games against Army and Wyoming canceled with an uptick of covid in the Air Force program. They look forward to getting back on the field against a New Mexico team that fell 27-20 to Nevada last week. While winless, the Lobos have covered 2 of 3 spreads. Who can cover the spread this week at the Air Force Academy?

Whose Run-Game Can Surface?

For as nicely as New Mexico runs the ball, Air Force is surely better, with streams of yards pouring in. That type of one-dimensional offense might not always work against the better and more-complete teams from their conference, but against a similarly-themed team that doesn’t win a lot, we could see it pay off. Even in losing fashion in their last game, a trio of Falcons’ players ran for at least 87 yards, with QB Warren Bryan getting involved, along with backs Brandon Lewis and Elija Robinson. We will see if, late in the game, the New Mexico defense starts to wilt a bit from the grind.

New Mexico has worked with two quarterbacks with incumbent starter Tevaka Tuioti and upstart Trae Hall. Both quarterbacks use their wheels a lot. They have a few good receivers Jordan Kress and Emmanuel Logan-Greene, but long stretches go by where the aerial game isn’t making a significant impact. They work with rising back Bobby Cole and let Tuioti get involved, and for the most part, it’s somewhat underwhelming. And Tuioti being iffy with a concussion doesn’t help, though Hall has shown a nifty set of legs. With 12 straight losses, including losing 9 in a row to close last season, we see a New Mexico program that was on the way up now really struggling to find success.

Things started out nicely for the Air Force defense in their belated start to the season. In holding Navy to 7 points, we saw many good things, and it carried over into the next week with San Jose State when they held them scoreless in the first half. But since then, in allowing the Spartans to go on a spurt in the second half and their total collapse against Boise, we’ve seen them flailing around some. And a lot of MWC teams will be made to look foolish by Boise. But against a New Mexico offense that has been showing signs of life, they might get tested.

We’ve never been here before, in a stop-and-start season where Air Force players and staff have to be getting bad thoughts about this season after this latest flare-up. And for players who have a lot on their plates may be compared to other student-athletes, it’s fair to wonder if these guys are looking at football the same way they would be under normal conditions. They won their opener, dropped two in a row, then got put on ice for a few weeks—it all adds up to what could be a strange headspace as far as football is concerned. Maybe it’s good that a team that hasn’t tasted victory in 12 games is coming into town coming off the short week because you have to question if we’ll see a sharp Air Force on Friday.

Can the Lobos Be Scrappy

The bottom line isn’t very flattering, but within that framework have been sequences that suggest the Lobos can hang in there. They lost to San Jose State 38-21. But fought hard from behind to even it at 21-21 before the Spartans took over late. The following week, they went into Hawaii and held a 20-7 second-quarter lead. Again, the wheels came off some, but they covered the spread. Then last Saturday, they again led at halftime against a Nevada team that sits atop the conference standings. And sure, they had another bad second half but still covered the spread. Obviously, finishing games remains an issue. Still, there is ample evidence to suggest that the Lobos aren’t completely lost in this context. And perhaps Air Force’s recent conditions only make it more viable that even this New Mexico team can be competitive.

It’s going to take some time to manifest in his first season at the helm, but first-year New Mexico head coach Danny Gonzalez is a defensive mind who did some nice coordinator work at San Diego State and Arizona State. So far, the secondary has a lot of work to do, allowing some monster games on the season already. Luckily for them, that’s not Air Force’s game. Determining whether the Lobos’ effectiveness against the run is real or just a byproduct of teams having so much success aerially that they don’t need to run the ball is difficult. But to the naked eye, they are pretty decent up-front, and that’s something that could pay off in this game.

Betting on teams on long losing stretches isn’t easy. It’s just hard to feel comfortable betting on a team like that psychologically. But this is not a great Air Force team, and they’re also on ice, bringing in a whole other slew of possibilities that could resonate badly on the field on Friday. I think New Mexico matches up decently with the Falcons, especially on defense, and I see them getting the cover on Friday.

Loot’s Pick to Cover the Point Spread: I’m betting on the New Mexico Lobos plus 9.5 points. Bet the game live-in game and get a 50% real cash bonus up to $250 FREE at Bovada Sportsbook.