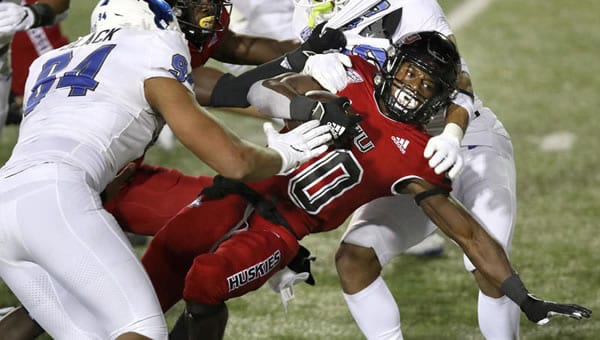 The Huskies have an overall record of 2-7 coming into this week’s game. They are currently 1-4
in Mid-American action. This season, the Huskies have been favored in 4 games while posting an
ATS mark of 3-5. Their average over-under betting line is 52.83 leading to an over-under record
of 6-2.

The Huskies head into the game coming off a 35-22 loss vs Central Michigan. With the defeat,
Northern Illinois also added an ATS loss to their resume. In the win, Northern Illinois completed
39.4% of their 33 passes, 2 of which resulted in touchdowns. In the rushing game, the Huskies did
not find the endzone, finishing with a total of 158 yards on the ground.

Quarterback Ethan Hampton comes in the game having completed 72 of 122 passes for a passer
rating of 77.15. Overall, he has a total of 798 passing yards. Through the air, the team will be
looking for a big game from leading receiver, Cole Tucker. On the season, he has caught 40 for
570 yards. The top option in the run game for the team is Harrison Waylee, who has carried the
ball 151 times for a total of 863 yards.

Western Michigan is coming off a 4 point loss to Bowling Green by a score of 13-9. The Broncos
entered the game as 5.0 point home underdogs, making this an ATS loss. In the game, Western
Michigan finished with 1 touchdown through the air while throwing for 191 yards. In the rushing
game, the Broncos did not find the endzone, while finishing with a total of 127 yards on the
ground.

Heading into the matchup, Jack Salopek has an overall passer rating of 61.66 on a total of
1231 yards. Thus far, he has thrown for 7 touchdowns and 10 interceptions. Receiver Corey Crooms
heads into the game, as the team’s leader in receiving yards, with a total of 620. The Huskies
have turned to running back Sean Tyler a total of 147 times for a total of 622 rushing yards.

The Huskies come into this week’s game, having covered just 20.0% of their last 10 games.
Their overall record in these games is just 2-8-0. The team’s average scoring differential was
-3.7, as they averaged 30.9 points per game. Defensively, they allowed an average of 34.6 points.
Their last 10 over-under record is 8-2.

Although Northern Illinois has a straight-up record of 1-4-0 in their last 5 road games, they
have not held up as well vs the spread going 3-2. The team averaged 30.4 points per game in these
games.

Against the spread, the Broncos have gone 5-5 over their last 10 games. Straight up, they have
a record of 4-6. On average, the team scored 22.7 points per game while allowing 26.5, leading to
a negative scoring differential.

Across their 5 previous home games, Western Michigan has an ATS mark of 1-4-0. Their
straight-up record in these matchups was 2-3-0 while averaging 27.8 points per game.

More Picks: Get our Tulsa at Memphis Week 11 betting analysis and spread pick

Heading into this week’s matchup, the Huskies will look to improve their offensive output, as
they are ranked just 63rd in the NCAA in points scored.

Although Northern Illinois has struggled to move the chains on 3rd down throughout the season,
they have a chance to take advantage against a Western Michigan defense that is allowing an
average of 26.78 points per game and has had its problems getting off the field on third
down.

This season, the Huskies have turned to the passing attack at a below-average rate this
season, but they have an opportunity to find success through the air vs a Western Michigan
defense, allowing teams to complete passes at a rate of 62.24%.

So far, the Northern Illinois offense is near the NCAA average in rushing, averaging 197.33
yards per game on the ground. This year, they have handed the ball off an average of 40.33 times
per game, placing them 28th in the country. This week, the Huskies will be facing a Western
Michigan defense ranked 79th in rush yards allowed per game. This year, they have averaged 206
yards per game when facing defenses ranked outside the top 50.

The Broncos will take the field as the 118th-ranked team in points scored per game.

This week, they have an excellent opportunity to improve these numbers as Northern Illinois’
defense that is allowing an average of 33.22 points per game.

One aspect of the game that could benefit a Western Michigan offense that struggles to
generate big plays in the passing attack is that they are facing off a Northern Illinois defense
that has yet to generate a lot of pressure on opposing quarterbacks. So far, the Huskies are just
87th in sacks per game.

For the season, Western Michigan’s offense is averaging just 123.89 yards per game on the
ground. This production has come on an average of 36.89 rush attempts per game (62nd). This week,
the Broncos will be facing a Northern Illinois defense that is ranked 52nd in rush yards allowed
per game. So far, they are averaging 130.0 yards per game when facing defenses ranked outside the
top 50.