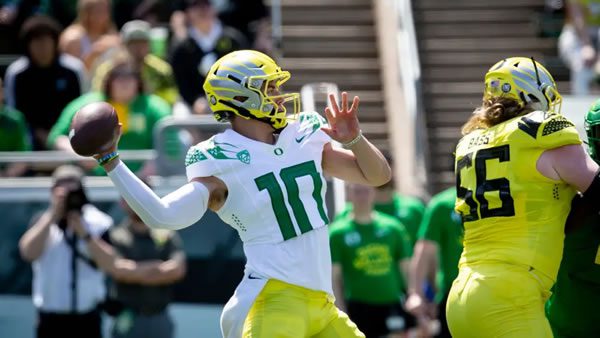 Point Spread: Ducks -12.5/Wildcats +12.5 (You can make the Ducks a +7.5 underdog by inserting them into a massive 20 point college football teaser found at Wagerweb Sportsbook)

The Ducks come into the game with an overall record of 4-1. This strong play includes going
2-0 in Pac-12 action. This season, the Ducks have been favored in 4 games while posting an ATS
mark of 3-2. Their average over-under betting line is 60.8 leading to an over-under record of
4-1.

In their last game, the Ducks are coming off a 45-27 win over Stanford. In addition, they
added an ATS win as they were 17.5 favorites on the spread. In the game, Oregon finished with 2
touchdowns through the air while throwing for 164 yards. The team ended the game with 4 rushing
touchdowns, along with a total of 351 yards on the ground.

Quarterback Bo Nix comes in the game having completed 111 of 161 passes for a passer rating of
109.25. Overall, he has a total of 1261 passing yards. Wide receiver Troy Franklin has come up
with the most production for the team, with a total of 391 receiving yards. The Ducks have turned
to running back Bucky Irving a total of 48 times for a total of 362 rushing yards.

The Wildcats are coming into the game with a 1-1 record in Pac-12 play. Their overall record
is 3-2. This season, the Wildcats have been favored in 1 game while posting an ATS mark of 3-2.
Their average over-under betting line is 51.9 leading to an over-under record of 4-1.

This week, the Wildcats will look to pick up another win, as they are coming off a 43-20 win
over Colorado. With the 23-point victory, Arizona also covered the spread. The team finished the
game throwing for 6 touchdown passes. Overall, the Wildcats had 495 passing yards on a completion
percentage of 69.4%. In the rushing game, the Wildcats did not find the endzone while finishing
with a total of 178 yards on the ground.

So far, quarterback Jayden De Laura has a passer rating of 99.51 while completing 125 of his
199 attempts. Receiver Jacob Cowing heads into the game, as the team’s leader in receiving yards,
with a total of 566. In the run game, Michael Wiley has accumulated 287 on 51 attempts to lead
the team.

In their last 5 games away from home, the Ducks have a straight-up record of 2-3 while going
1-4 vs the spread. The team’s offense averaged 23.8 points per game in these contests.

Through their last 10 matchups, Arizona has gone 4-6-0 straight up and 6-4 vs the spread. On
average, the team scored 26.6 points per game while allowing 32.0, leading to a negative scoring
differential.

Through their last 5 home contests, the Wildcats’ offense has averaged 26.0 points per game
while allowing an average of 25.6. Arizona posted an overall record of 3-2-0 while going 4-1
ATS.

So far, the Ducks are averaging 40.6 points per game on offense, which is good for 16th most
in college football.

Despite their strong overall statistics, the Ducks need to be better on 3rd downs, as they
converting at a below-average rate this year.

So far, the Ducks have turned to the passing attack at a below-average rate, but they have an
opportunity to find success through the air vs an Arizona defense allowing teams to complete
passes at a rate of 71.7%.

On the ground, the Oregon offense is averaging 228.8 yards per game, good for 10th in the
country. This has come while ranking 50th in attempts at 38.4 per game. This week, the Ducks will
be facing an Arizona defense ranked 155th in rush yards allowed per game. This year, they have
averaged 275 yards per game when facing defenses ranked outside the top 50.

Heading into the game, the Ducks will need a better performance out of their defense, as they
are currently 98th at 30.2 points per game allowed.

Heading into this week’s matchup, the Wildcats will look to improve their offensive output, as
they are ranked just 63rd in the NCAA in points scored.

This season, Arizona’s offense has had its problems sustaining drives, as they are below
average unit on 3rd downs. But, this could be the game that they turn things around as Oregon is
allowing an average of 30.2 points per game and has had its problems getting off the field on
third down.

So far, the Arizona offense is averaging just 136.0 yards per game on the ground. This
production has come on an average of 31.4 rush attempts per game (112th). However, look for
things to be tough sledding, as Oregon has been one of the tougher teams to run against this
year.

Ducks -12.5. Did you know that you could be betting on football games at -105 odds instead of the more expensive -110 (or more) that you’re currently laying? Imagine how much money you would have saved over the past few years! Start saving big bucks today by making the switch to BetanySports Sportsbook!