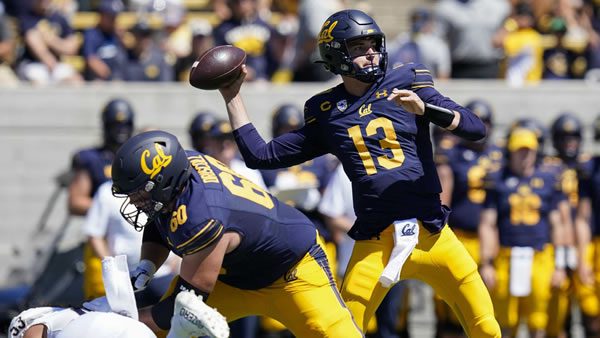 The Oregon Ducks come to Berkeley on Saturday for a Pac-12 battle with the Cal Golden Bears. The Ducks are starting to get in a real groove now, coming off a big win last week with a 45-30 toppling of previously unbeaten UCLA. That gives them six straight wins, as they currently have a stranglehold on the top spot in the conference, having not yet lost in the Pac-12. But things aren’t always as it seems with Cal. Granted, it isn’t going great at the moment, with Cal coming off a 28-21 loss to the Huskies last week, their third defeat in a row. But they have been tough in these matchups before, including a 7-point loss in Eugene last season, so you never know. Let’s break this one down.

Backers of the Ducks have to like a lot of things they’ve seen the last two months from this bunch. And for them to enter this critical period of the season with a big head of steam could really help. First, they shook off what had to be an upsetting 49-3 loss to Georgia in their opening week of the season. Since then, there has nary been a hiccup as they beef up their conference credentials. It was the big win over undefeated UCLA last week that really showed what they’re about. With five TD throws from Bo Nix, a big day on the ground, and just enough big plays on defense, they were able to dominate in spots. Four touchdowns in the second quarter made it a hump the Bruins couldn’t quite climb.

We see a nice identity forming on this Oregon team, with Nix having strung together some great showings after the rough debut against the Bulldogs. With Mar’Keise Irving and Noah Whittington, they can run the heck out of the ball, with Nix adding some juice with his legs, as well. But they can’t be taken for granted through the air, where guys like Troy Franklin and Chase Cota add a lot of big-play appeal. We will see if the Oregon defense can hold up its end of the deal. They can be pretty brutal against the more-vital aerial offenses they face. And not that Cal is great in that one area, but it is the one thing they do pretty well on offense from time to time.

Can Cal get it Together?

>After opening conference play with a win over Arizona, the Golden Bears have dumped three in a row. The last two were one-score affairs that were up in the air until late, so at least they aren’t getting manhandled, but the prognosis is bleak. Against an Oregon offense that can get you any number of ways, their secondary is just going to need to come up with some answers to keep this one from getting out of hand. They have been fairly rigid against the run, and that could go a long way this week, but let’s face it, this Ducks’ offense is beyond what they’ve been playing recently, and the “D” still hasn’t been doing much. The playmaking isn’t always a factor, and sure they’re being left out to dry by their offense, but they really aren’t pulling the load on this side of the ball.

Cal quarterback Jack Plummer has some good tools with which to work, including RB Jaydn Ott and receivers Jeremiah Hunter and J. Michael Sturdivant, among others. Plummer can work pretty efficiently, but after seeing promise in their first handful of games, we’ve seen some drop-off, certainly not aided by a defense that has gotten more exploitable over the course of the season. In the Pac-12, you’re going to need to put up points, not show promise or hints of something good. There are going to be some high-score contests, and Cal just hasn’t been getting it done in these recent conference contests. Maybe at home against a team coming off a big game whose defense has issues of their own is a spot where they can come up with something. In a way, Cal could be a team that just looks worse on the surface than they really are. They’ve been in some close games where a little wrinkle here or there would have their season looking a lot different. In other words, they might not be as far off in having some success in this conference as it looks, and I wouldn’t rule out a surprise or two from this bunch looking ahead, at least in an ATS sense, if not a straight-up one.

Something tells me there might be divergent outlooks for this game where you have an Oregon team knowing they’re up against a lower-rung conference team. At the same time, it’s a giant home game for Cal and a chance to immediately lend some respect to a season that has gotten away from them in recent weeks. Obviously, a thorough Oregon stomping would hardly register as a major surprise, but I think Cal can keep this one in the ballpark and earn the cover at home. I’ll take the California Golden Bears in this one.

Loot’s Pick to Cover the Point Spread: I’m betting on the California Golden Bears plus 17 points.