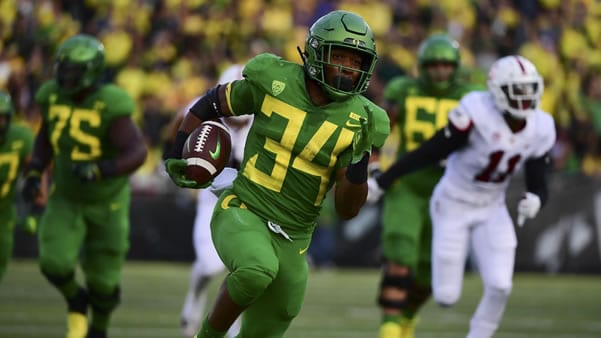 The Oregon Ducks come up north for a Pac-12 showdown in Pullman with the Washington State Cougars. After a belated start to the season, both teams were able to successfully kick off their seasons last week with wins. Oregon took down Stanford, 35-14, in a reasonably routine home-win where they saw many new pieces able to hit the ground running. Washington State, meanwhile, looked pretty good in a 38-28 win over Oregon State on the road. Can they complete their Oregon-sweep or will the Ducks remind them who the big dogs are in the Pac-12 North?

Potential Washington State backers can glean some hope from last season’s game, though it frankly might not mean all that much. But Washington State came within two points in a 37-35 loss—not bad as they were a .500 team going against a squad still in the CFP running. In addition, Oregon’s QB Justin Herbert is now gone, as is all of his offensive line and other key pieces. The same applies to Washington State, as they’re also working in a new QB. But after beating Oregon St. by ten points as three-point dogs, playing Oregon so tough last season, and getting this one at home, maybe things aren’t so bleak for the Cougs.

They have to work in many new pieces, with some existing pieces helping ease the transition. Tyler Shough was decent in the role of full-fledged starter, throwing for 227 yards and a score while connecting with standout Oregon receivers Johnny Johnson, III., Mycah Pittman, and DJ Johnson. But what really brings it together is the run-game, led by two-time 1000-yard rusher CJ Verdell. The dynamic back was over 100 yards on Saturday and, incidentally, was gigantic last season in this matchup, running for a monstrous 257 yards and three TDs, adding 56 receiving yards.

Having a difference-making back like Verdell can help smooth out the new look at quarterback. They also have weapons in the backfield other than Verdell to flex on conference opposition. Let’s keep in mind, however, that what we saw on the field Saturday was at home against a Stanford team that has really been plucked clean of talent and is somewhat in the dumps. We saw a completely revamped offensive line thriving last week, and we might need to exercise caution, being that it’s possible Oregon was made to look better than they really are last week. Part of you wants to defer to the top recruiting of head coach Mario Cristobal and the momentum from a big season in 2019. But there are a lot of new pieces in key places, and growing pains could surface at some point.

Can WSU Hang with the Ducks Once Again?

It wasn’t just last season when a so-so Cougars squad hung in there against a Ducks team competing for national honors. Leading up to that, Washington St. had scored four straight wins over the Ducks. They are now with head coach Nick Rolovich, with Mike Leach having departed to the SEC. Rolovich has an offensive background, having whipped the Hawaii offense into shape the last several seasons. They are working with a new quarterback in true freshman Jayden de Laura from Hawaii.

In Saturday’s college debut, de Laura was pretty good, throwing two TDs on 227 yards along with a pick. He also had some nice runs, even scoring once on the ground. And while him going from the HS ranks into a road game against Oregon State and coming out of the good end of it is promising, to go from what he is accustomed to a game against Oregon is a quantum leap, of sorts, and we’ll see how the youngster holds up. The Oregon defense looked stout on Saturday, but that could have been due to a dilapidated Stanford offense. They didn’t get any turnovers or sacks, and that would suit de Laura well this week.

There are some weapons with which de Laura has to work. RB Deon McIntosh has taken over the lead back duties and thrived on Saturday with 147 yards and a score. We see more run from this Cougars’ offense, with Travell Harris and De Laura also doing damage on the ground. Harris ran for a TD on 49 yards while catching 2 TDs on 107 yards receiving. Renard Bell and Jamire Colvin were also showing some early chemistry with de Laura.

Main Obstacle for the Cougars

Leading up to this season, we had a Cougars team that would air it out with the best of them. It has been a big part of the recent success of the Cougars when playing the Ducks. This season, under new leadership, Rolovich might be aiming for better offensive balance, along with some help on the other side of the ball. The question is whether he has had enough time to get the players needed to pull it off. If not, they could find themselves in-between styles, trying to become a more complete team while maybe losing some of their previous danger-potential. And when looking at their recent success against Oregon, their high-flying offense with defense more an afterthought actually yielded good results.

I think that the Ducks are closer to being who they want to be. And what they saw work against the Cougars last season is still here, namely Verdell, who looms large as a major factor in this matchup. I see de Laura being more against it this week against this Oregon defense, and while they looked good against the Beavers last week, I envision Oregon getting some separation at some point, notching the win and covering the spread in Pullman.

Loot’s Pick to Cover the Point Spread: I’m betting on the Oregon Ducks minus 8.5 points. Bet your Week 11 NCAA football picks FREE by taking advantage of a 100% real cash bonus on your first deposit of $100 to $1000 at BetNow Sportsbook!