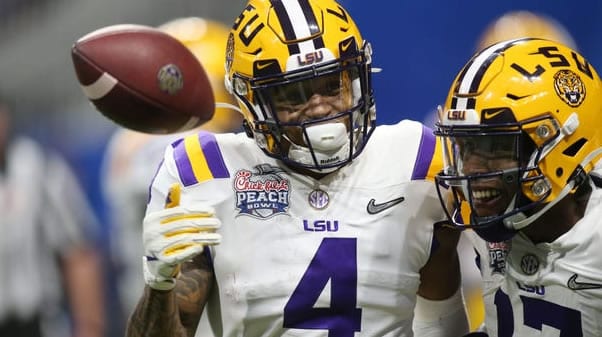 Point Spread: SOCAR +6.5/LSU -6.5 (Bookmaker – Online since the Nineties! Fast no-hassle payouts! The way it should be!)

The South Carolina Gamecocks come to Baton Rouge on Saturday for an SEC showdown with the LSU Tigers. South Carolina is just 2-2, starting to see some good signs, including Saturday’s 30-22 upset win over Auburn at home. For bettors, they’ve been solid, having covered three spreads with a push in 4 games thus far. They could really add a nugget to their resume this week when they go into Tiger Stadium to take on defending champions LSU. The Tigers are hoping that having last week off gave them time to prepare, as they have fallen off quite dramatically so far this season, losing to Mississippi State, beating Vandy, and then getting beaten by Missouri in their last game. Having lost twice as better than two-touchdowns favorites would understandably make people hesitant. Can they reclaim some of their form from last season, or will the upstart Gamecocks step up to the challenge?

Reasons For LSU To Worry

Having a week off and being at home is a nice way for LSU to enter this game, especially as the Gamecocks were in a hard-fought battle with Auburn last week. Not that it’s good that their game against Florida was canceled, but it spared them some travel and wear and tear. And this will be the first time LSU has been home since their opening-week loss to Mississippi State. But some things are starting to come together nicely for South Carolina and head coach Will Muschamp. After giving up just 7 to Vandy the previous week, we saw a South Carolina defense able to keep Auburn in check for long stretches of the game. And we’re seeing a group that is pretty solid against both the run and pass. They really got after it, picking off three passes, with Jaycee Horn getting two. Keir Thomas had two sacks, and we’re starting to see a playmaking component develop with some real go-getters on this side of the ball.

At quarterback, the Gamecocks have experienced senior Collin Hill, known for being a starter over parts of the last three seasons with Colorado State. So far, he has been pretty capable, working with RB Kevin Harris, who is a nice weapon in the backfield. Top receiver Shi Smith already has 34 catches, as Hill and Muschamp try to identify other weapons in the aerial game. TE Nick Muse is a key weapon. Against an LSU defense that may have lost a lot, but still has a bevy of blue-chippers, we will see if the Gamecocks O-line can repel the pass-rush, an area in which they haven’t always thrived this season.

Get all the team's betting previews: This Week's College Football Picks!

Is LSU as Bad as They Look?

It’s all relative, as normally what happened to LSU wouldn’t raise eyebrows, but when you’re talking about a team that took the nation by storm last season, losing to Mississippi State and especially Missouri is going to take some people aback. Whatever the case, it doesn’t seem like the “next man up” theory is really going to work this season, as the next man up isn’t as good as the previous guy in most of these positions. And now they’re dealing with what is being termed a “major lower-body injury” to quarterback Myles Brennan, who probably won’t be ready for action come Saturday, adding another layer of difficulty to a worsening situation.

You almost wonder if the combination of them winning the title last season, the massive key departures, along with all the challenges and uneasiness of this season just has this LSU program a little off-kilter. You throw a championship hangover in there, take their best players, then deal with the kooky nature of the season, and maybe it has all added up badly for this program. Still, it stands to reason that LSU could improve as they begin cementing these new pieces in the formula. Defending champion or not, what we’ve seen this season thus far suggests a fairly run-of-the-mill SEC team. And not embracing that concept has led LSU bettors to be way off on two of three bets this season. Could this be another one?

It’s actually difficult to balance LSU with what we have recently seen and what we see now. With them now laying less than a TD as of press time at home against a South Carolina that was 4-8 last season, the brain starts thinking, “Oh wow, the defending national champion against a 4-win team from last season. Let’s roll the dice on LSU.” And that very well could end up working out, but it almost seems like that’s what the book would want you to think, especially with that 6.5. if it holds, coming in right under a key number. You could see some casual bettors jumping on that. It’s just that LSU hasn’t seemed themselves and after another covid cancellation, along with the state of their quarterback, how shot out of a cannon are they going to be? To go from Burrow to Brennan was some falloff, but what happens now that Brennan looks like he can’t go? Does the offense take another dip? Between the departures, injuries, and players like Ja’Marr Chase sitting out, a huge chunk of their championship team is not on the field.

This isn’t an endorsement on South Carolina or a critique on LSU, as much as it is an estimation of a fairly-competitive game. From what has been seen on the field, these teams appear to be in more or less the same zone in terms of overall form and potential. And if anything, South Carolina, with some wind in their sails, could be in a better position to overperform than an LSU team that keeps getting bad news on the personnel front. I’ll take the Gamecocks in this one.

Loot’s Pick to Cover the Point Spread: I’m betting on the South Carolina Gamecocks plus 6.5 points. Are you a college kid looking for a little action but don’t wanna break the bank? We have a sweet bonus offer for ya! Deposit only $25 and get a $50 bet FREE at Intertops Sportsbook! Must use bonus code ROOKIE200.