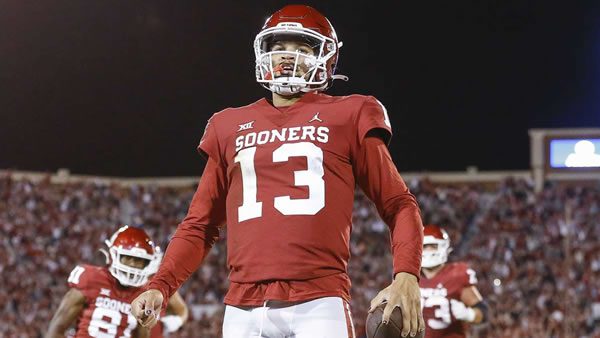 Oklahoma began the season as one of the favorites to make the College Football Playoff. While the road hasn’t exactly been smooth, the Sooners remain undefeated heading into Saturday afternoon’s Big 12 bout with Texas Tech in Norman.

OU rides a 16-game winning streak into this match-up and sits at No. 4 in this week’s Coaches Poll. The Red Raiders, meanwhile, just fired their head coach.

The Sooners are favored by almost three full touchdowns for this one; which way are we going with our free college football betting pick?

This week’s college football betting lines at SportsBetting.ag (Sweet live betting platform and 35% crypto reloads!) opened with Oklahoma at -19 over Texas Tech, with an over/under of right around 68.5. Early betting action then bumped the Sooners to -20 and dropped that total to 66.5.

The Red Raiders are 5-3 on the season after losing at home to Kansas State last week 25-24. Texas Tech scored two touchdowns in the first four minutes and led 24-10 at the half. But the Raiders then came up completely empty in the second half, got outscored 15-0, and lost.

Then Monday Tech fired HC Wells after just 18 games in charge. OC Cumbie, a former Red Raiders QB under Coach Leach, will serve as interim HC for the rest of this season.

The Red Raiders started 3-0 this season, with a win over Houston, which is now 6-1. But since then, Tech has taken bad losses to Texas and TCU before blowing that lead last week.

The Raiders have also been out-gained and out-rushed by three of their last five opponents.

At 2-3 in conference play, Texas Tech trails Oklahoma State, Baylor, and Iowa State by a game and a half in the battle for the No. 2 spot in the Big 12.

The Red Raiders also need one more win to become bowl-eligible, and they might be underdogs for each of their last four games.

The Sooners, meanwhile, are 8-0 on the season after coming from behind to avoid disaster last week, beating one-win Kansas 35-23. Oklahoma, playing as a 38-point favorite, came up completely empty in the first half and trailed the Jayhawks 10-0 into the locker room. The Sooners still trailed 17-7 late into the third quarter before finally waking up, eventually scoring touchdowns on five straight possessions, to escape KU’s upset bid.

But it’s really hard to cover a 38-point spread when you only score 35.

Oklahoma actually got out-gained by Kansas 412-398 and lost time of possession by 36:24 split.

The Sooners have now been out-gained three times in their last four games.

That’s not the first close call for Oklahoma this season; they opened with a 40-35 decision over what’s now a 1-6 Tulane team, later beat Nebraska by a touchdown, then beat West Virginia by a field goal, and then had to come from way behind to beat Texas 55-48. So this Sooners team is playing with fire.

But at 5-0 in conference play, Oklahoma leads the Big 12 by a game and a half over the Cowboys, Bears, and Cyclones.

The Sooners own a nine-game winning streak in the series with the Red Raiders, going 6-3 ATS in the process. Last year in Lubbock, Oklahoma spotted Texas Tech an early touchdown, then scored 42 consecutive points on its way toward a 62-28 victory and the cover at -17.

That game played way over a total of 65.

Unders are 5-3 in Texas Tech games this season, which are averaging 65 total points.

Overs are 5-3 in Oklahoma games this season, which are averaging 66 points.

Overs are 10-0 over the last ten meetings between these two teams, which have trended really high-scoring.

Oklahoma is supposed to win the Big 12 and go to the CFP, yet it barely beats teams like Tulane, West Virginia, and Kansas. What the hell gives? The change at quarterback isn’t the whole story; defensively, the Sooners are giving up 385 yards per game. Also, these teams have played four common opponents this season; while Oklahoma owns the better record against Kansas, Kansas State, Texas, and TCU, it’s only +100 yards in those four games, while Texas Tech is +49. Also, playing at home means the spread is probably inflated by three or four points. Despite the coaching change, we like the Red Raiders here, plus the points. Also, be sure to check out our Week Eight NFL Predictions!