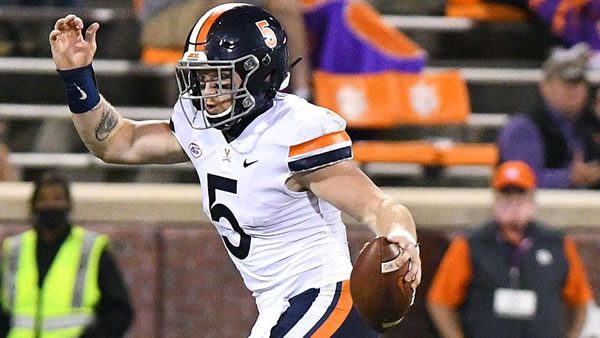 The Virginia Cavaliers come to Provo on Saturday for a showdown with the BYU Cougars. Both teams have just two losses on the season and know that a big win here would give them a nice boost. There’s a storyline here, with Virginia head coach Bronco Mendenhall returning to his former stomping grounds where he was head coach for over a decade. Virginia is on a nice roll, winning their fourth in a row with a 48-40 win over Georgia Tech on Saturday. BYU, meanwhile, was able to come back from a loss to Baylor the previous week to edge Washington State, 21-19, averting a late two-point conversion from the Cougars to score their fourth win over a Pac-12 team this season. Who can cover the number in Provo this Saturday?

Teams Going in Opposite Directions?

Beyond the individual matchups and components sometimes lies the element of inertia. There’s no question that BYU could pounce on a dicey Virginia run-defense or that there aren’t other opportunities for the Cougars on both sides of the ball. It’s just that after a 5-0 start, the last three weeks have palpably been a bigger struggle. Playing a dangerous pair of teams in Boise and Baylor has a lot to do with that, but things aren’t coming as easy for the Cougars as it did in their first five games.

As 6-point favorites, they fell to the Broncos in a two-score game before losing by 14 to Baylor. Even in winning against Washington State, there were long periods of flatness on offense, an equation that would resonate greater this week. With Gunner and Baylor Romney banged up, they lost a little juice and now look to get those guys back possibly, as both are still questionable. But suffice to say, it hasn’t been the same BYU team the last handful of weeks.

Meanwhile, you have a Virginia team that is really seeing things work out lately. The Cavs got off to a rough start in conference, dropping back-to-back games to UNC and Wake, dropping each game by 20 points. But then we saw the aerial game reach a high gear, and an element of clutch start seeing them through in tight shootouts with Miami and Louisville, followed by 48-point outputs in their last two games.

Why Virginia is Dangerous This Week

Virginia quarterback Brennan Armstrong has really dialed it in lately. With 1247 yards passing in the last three games, the young QB has 23 TD passes on the season. WR Dontayvion Wicks has been one of the best in the country and could go over 1000 yards on the season in this game. And it’s not just Wicks, as he gets a lot of support from several receivers who can do serious damage. Armstrong is also handy as a runner in the red zone, and while the run isn’t a huge part of their approach, it’s a definite option, especially when up close.

After a really good start to the season on defense where opposing offenses were genuinely struggling, we’ve seen teams like Baylor, and to a lesser degree, Boise start to take it to this “D.” Now going against a Virginia team that has scored 48 in consecutive games, one can see why potential BYU backers would be concerned. It’s important to note, however, that even when allowing more points, the BYU “D” isn’t getting ripped apart aerially. Teams have had more success running against the Cougars, and that’s not really Virginia’s bag.

While Mendenhall might feel comfortable in Provo, this is a pretty out-of-the-way locale for an ACC team in late October. It’s a funky location, with some possible weather and some altitude that could conceivably render a Virginia team a little off-center. And while Virginia has been thriving in these ACC shootouts, maybe there’s something about BYU’s all-around competence that can play well off a flashier team with maybe less overall substance.

More Picks: Iowa at Wisconsin Prediction vs. the Spread >>>

BYU hasn’t been getting great results the last few weeks. But Baylor is pretty good. And the Cougars still beat four Pac-12 schools this season. And not to besmirch Virginia’s surge, but do razor-close wins over Miami and Louisville, along with a one-score win over Georgia Tech where they give up 40, really suggest that they’re cut out for thriving against BYU in Provo? Hats off to them for forging the kind of high-powered air attack that can threaten anyone on the right day. But they are wholly incomplete, and just because it doesn’t show up against middling ACC squads doesn’t mean it’s going to come off swimmingly in this spot.

It would be unfair not to admit that BYU’s recent form isn’t enticing, especially seeing that Virginia is on a bit of roll and probably coming into this game with some wind in their sails. It’s not a conference game for the Cavaliers, but it’s a big game for both, and momentum can count for a lot at this level. I just think this is where a home advantage can really resonate. BYU won last week but needs to stop the bleeding, and a win over a hot Cavaliers bunch would really hit the spot. I see the greater balance on both sides of the ball resonating this week, with the Cougars getting the cover at home. I’ll take Brigham Young.

Loot’s Pick to Cover the Point Spread: I’m betting on the BYU Cougars minus 2 points. Bet all your Week 9 college football picks (and next week’s too!) for FREE by scoring a huge 100% REAL CASH bonus on your first deposit of $100 to $1000 at Betnow Sportsbook!