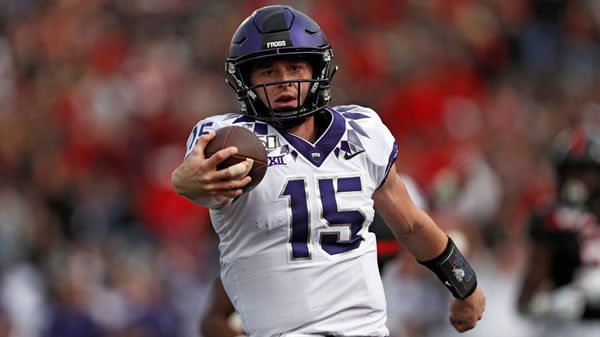 The Red Raiders head into the game coming off a 45-17 loss vs Baylor. With the defeat, Texas
Tech also added an ATS loss to their resume. In the game, Texas Tech finished with 1 touchdown
through the air while throwing for 159 yards. On the ground, the team ended with 1 rushing
touchdown while averaging 4.1 yards per carry for a total of 149 yards.

In their previous game, the Horned Frogs picked up a 41-31 home win over West Virginia. This
was an impressive victory as they were also the 7.5 point underdogs. The team finished the game
throwing for 3 touchdown passes. Overall, the Horned Frogs had 341 passing yards on a completion
percentage of 57.1%. The team ended the game with 2 rushing touchdowns, along with a total of 153
yards on the ground.

Heading into the matchup, Max Duggan has an overall passer rating of 129.38 on a total of 2212
yards. Thus far, he has thrown for 22 touchdowns and 2 interceptions. Receiver Quentin Johnston
heads into the game, as the team’s leader in receiving yards, with a total of 650. In the run
game, Kendre Miller has accumulated 851 on 132 attempts to lead the team.

Through their last 5 road games, Texas Tech has an ATS record of just 2-3-0. However, their
overall record was 0-5-0 while averaging 23.6 points per game.

In their last 10 games, TCU has covered the spread at a rate of 90.0%, while putting together
a straight-up record of 9-1-0. They maintained a positive scoring differential in these games by
averaging 39.9 per game and allowing 29.4. Their last 10 over-under record is 7-3-0.

TCU has played well in their previous 5 home games, going 5-0-0 straight up. In this stretch,
they averaged 45.2 points per game while allowing 27.4. The team’s also performed well vs the
spread at 3-2-0.

Heading into the game, the Red Raiders are ranked 35th in points per game.

This season, the Texas Tech offense has struggled in the run game, averaging just 137.75 yards
per game on the ground. In terms of attempts, they rank 44th in the NCAA at 38.5 per contest.
This week, the Red Raiders will be facing a TCU defense ranked 85th in rush yards allowed per
game. This year, they have averaged 150.2 yards per game when facing defenses ranked outside the
top 50.

Heading into the game, the Red Raiders will hope for some improved play from their defense, as
they are currently 90th at 29.25 points per game allowed.

So far, the Horned Frogs are averaging 44.25 points per game on offense, which is good for 3rd
most in college football.

Although TCU has struggled to move the chains on 3rd down throughout the season, they have a
chance to take advantage against a Texas Tech defense that has had its problems getting off the
field on third down.

Although the Horned Frogs have turned to the passing attack at a below-average rate this
season, they have an opportunity to find success through the air vs a Texas Tech defense allowing
teams to complete passes at a rate of 55.49%.

So far, the TCU offense is 15th in yards per game, despite handing the ball off an average of
37.5 times per contest (55th). This week, the Horned Frogs will be facing a Texas Tech defense
that is ranked 107th in rush yards allowed per game. So far, they are averaging 217.88 yards per
game when facing defenses ranked outside the top 50.

TCU -9.5. Bet TCU at +11.5 by inserting them into a massive 20 point college football teaser found at Wagerweb Sportsbook!