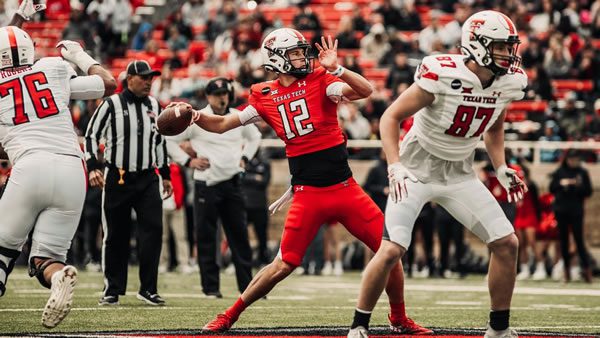 The Texas Tech Red Raiders and Houston Cougars will open their respective college football seasons on Saturday at NRG Stadium. Both teams have a lot in common entering 2021. They are teams that used to win more and have recently fallen on hard times. You have a pair of third-year coaches who offered hope but haven’t seen it turn over yet in Texas Tech’s Matt Wells and Houston’s Dana Holgersen. In 2020, the Red Raiders were 4-6, their second 4-win season in a row, while Houston was 3-5. Who can kick the year off on a positive note on September 4?

A big part of Texas Tech going from a steady offensive powerhouse to an afterthought the last several years has been the lack of a star at the QB position. Oregon transfer Tyler Shough offers hope that he can step into a Red Raiders’ offense that has some nice pieces in place and help them regain some of their edge. While they gained at QB, they lost some transfers at the receiver position, but leading ball-catcher Eric Uzekanma (questionable) returns, as does speedy Myles Price. They have a nice back in SoRodorick Thompson. Look for Shough to make everyone around him better. Shough was limited last season with games scratched left and right, but he showed he could get an offense on the move.

Houston, despite their recent woes from an overall standpoint, shouldn’t be a complete joke defensively. At least they weren’t last season when only two opponents got into the forties in scoring. They weren’t good, as their “D” didn’t keep them in games, but they were at least adept at curtailing opponents from running wild on them, even without a lot of support on the other side of the ball. Still, Shough had managed to put up big numbers before, and that was against Pac-12 defenses. We just don’t know what this Tech offense will look like when it takes the field. In Houston’s corner is a solid secondary, with blossoming youngsters throughout the unit. For all their other issues, that aspect could come in handy against a Tech offense that will be throwing a lot.

Getting a Big 12 school in week one isn’t that great on paper, perhaps, but Houston is at home against a defense that has been readily exploitable in recent seasons. Last season saw Texas Tech allowing eye-popping levels of scoring. That’s part of doing business in the Big 12, with teams like Oklahoma, Oklahoma State, and Texas laying it on thick. And Houston’s offense has been sputtering as of late, and in over half of their games last season, they were barely there. So maybe they won’t test the Texas Tech “D” to the same extent, but this is a good early indicator if Holgersen has managed to finally whip this offensive unit into shape.

Holgersen’s excuses are thin now. He has got his guys. Recruitment hasn’t gone as well as some had hoped. Consistency has been utterly elusive. But the return of QB Clayton Tune offers hope and better continuity this season could allow him to get into a groove. They need help in the backfield, where they return little experience or proven production. And not having two of their three leading receivers from last season is yet another hump they have to climb. They have a good tight end in Christian Trahan and a few prospects who could develop, but they will need to see a few things work out ahead of schedule. And having a lot of moving pieces along the O-line only helps add to the uncertainty.

More Picks: Oklahoma vs. Tulane Pick Against the Spread >>>

With Texas Tech, there may be more causes for such a sentiment. With Houston, you’re more or less reduced to the hopeful feeling that Holgersen can start to see some progress in year three. But other than a nice emerging dual-threat QB in Tune and a secondary that has developed at a steeper climb than other parts of the squad, not a lot of other details really fall into place. With Texas Tech, you have a team whose shortcomings are more in plain sight playing in the Big 12. But their defense isn’t likely to get run over like that in this spot. And you add in a difference-maker at quarterback with Shough. It at least offers hope that the offense will flex some added horsepower this season.

Just based on what Matt Wells has done in his first two seasons at Tech, it’s hardly a foregone conclusion that they’re going to do what they’re supposed to do on Saturday. The Red Raiders’ formula for success isn’t by any means automatic. I just see a team with more explosive potential than its opponent. Houston will be steadfast, flexing different aspects of its defense and moving the ball enough to stay right in the game against a Texas Tech “D” that still isn’t ready for primetime. It’s not hard to envision a bit of a grind for both teams. In the end, however, I just see enough big plays from the Texas Tech side being enough to get them the win and cover in Houston on the 4th.

Loot’s Pick to Cover the Point Spread: I’m betting on the Texas Tech Red Raiders minus 1.5 points. Bet your Week 1 college football picks for FREE by scoring a 100% REAL CASH bonus on your first deposit up to $300 at MyBookie Sportsbook! (Must use bonus code PREDICT100).