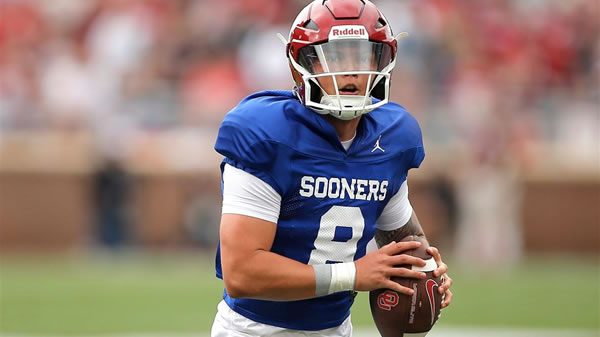 In their last game, the Longhorns are coming off a 38-20 win over West Virginia. In addition,
they added an ATS win as they were 7.5 favorites on the spread. In the game, Texas finished with
4 touchdowns through the air, while throwing for 336 yards. On the ground, the team ended with 1
rushing touchdown while averaging 3.4 yards per carry for a total of 110 yards.

Hudson Card heads into the game as the eam’s top quarterback, with a current passer rating of
110.46. So far, he has completed 74 passes for a total of 923 yards. Receiver Xavier Worthy heads
into the game, as the team’s leader in receiving yards, with a total of 331. The Longhorns have
turned to running back Bijan Robinson a total of 88 times for a total of 515 rushing yards.

The Sooners head into this week’s game with an overall record of 3-2. However, they are 0-2 in
Big 12 action. This season, the Sooners have an ATS mark of 2-3-0 while being favored in every
game. Their over-under record sits at 2-2-1 on an average point total betting line of 63.7.

Oklahoma is coming off a 31 point loss to TCU by a score of 55-24. The Sooners entered the
game as 4.5 point home underdogs, making this an ATS loss. To finish the game, the Sooners had a
yards per completion figure of 12.6 and a total of 176 yards through the air. However, they did
not come up with a touchdown pass through the air. The team ended the game with 3 rushing
touchdowns, along with a total of 179 yards on the ground.

Quarterback Dillon Gabriel comes in the game having completed 85 of 133 passes for a passer
rating of 120.97. But, leading up to the game, he is listed as questionable on the injury report
(Head). Marvin Mims Jr. leads the team’s receiving corps with 22 catches for a total of 438
yards. The top option in the run game for the team is Eric Gray, who has carried the ball 66
times for a total of 460 yards.

Through their last 10 matchups, Texas has gone 4-6-0 straight up and 5-5 vs the spread. On
average, the team scored 31.6 points while allowing 27.3, leading to a positive scoring
differential.

Although Texas has a straight up record of 1-4 in their last 5 road games, they have not held
up as well vs the spread going 1-4. The team averaged 24.0 points per game in these games.

Over their last 10 games, the Sooners have covered the spread at a rate of 60.0%. In these
games, they posted a straight up mark of 6-4. They maintained a positive scoring differential in
these games by averaging 35.9 per game and allowing 26.4. Their last 10 over-under record is
5-4-1.

Across their last 5 home contests, Oklahoma has been good against the spread posting a mark of
3-2-0. Their overall mark in these games was 4-1, while averaging 37.4 points per game.

Heading into the game, the Longhorns are ranked 32nd in points per game and are matchup up
against an Oklahoma defense, allowing an average of 25.2 points per contest.

Although the Longhorns have turned to the passing attack at a below average rate this season,
they have an opportunity to find success through the air vs an Oklahoma defense allowing teams to
complete passes at a rate of 66.42%.

So far, the Texas offense is averaging just 154.4 yards per game on the ground. This
production has come on an average of 32.0 rush attempts per game (105th). This week, the
Longhorns will be facing an Oklahoma defense ranked 158th in rush yards allowed per game. This
year, they have averaged 173.25 yards per game when facing defenses ranked outside the top
50.

Going into the game, the Longhorns’ defensive unit is 43rd in the NCAA in points allowed per
game at 21.4.

The Sooners should have an opportunity to put together some big plays in the passing game, as
Texas is a below-average unit in generating pressure. So far, the Longhorns are just 77th in
sacks per game.

So far, Oklahoma has relied heavily on the ground game, as they rank 19th in attempts per
game, with an average of 42.2. This heavy usage has led to an average of 220.8 rush yards per
game, placing them 14th in the NCAA. This week, the Sooners will be facing a Texas defense that
is 48th in rush yards allowed per game. So far, they have averaged 220.0 yards per game when
facing top 25 rush defenses.

Sooners +7.5. Bet your Horns/Sooners pick for FREE by taking advantage of a 50% real cash bonus up to $250 in free bets at a sportsbook that offers rebates on ALL your bets, offers online poker, FAST payouts and the absolute BEST live wagering platform on the web —> Bovada Sportsbook!