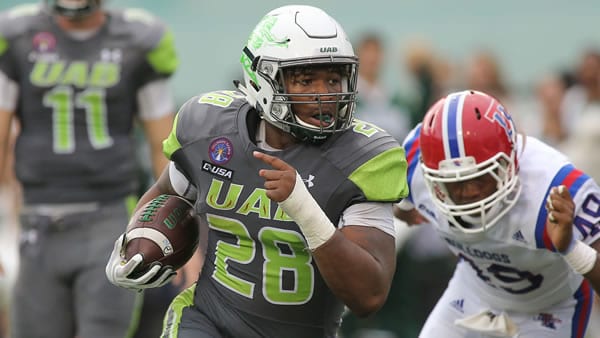 The UAB Blazers take on the South Alabama Jaguars in an in-state battle in Mobile on Thursday night. State pride is at stake, as both squads look to poke their heads above the .500 mark this week, as both teams enter this game at 1-1. After beating Central Arkansas, the Conference USA’s Blazers fell to Miami, 31-14, on the 10th in their last game, getting a little rest for this matchup. The Jaguars, coming out of the Sun Belt, followed a season-opening win over Southern Miss with a September 12 loss to Tulane. 27-24. They have covered both of their spreads this season and look to make it three in a row on Thursday.

In this climate, taking last season’s results can be a faulty a roadmap. A lot is happening in this world to make 2019 football results seem more irrelevant than they normally would. Still, when a team decimates an opponent as thoroughly as UAB did to South Alabama, it’s worth mentioning. And unfortunately, a lot of the same people who tormented South Alabama during last season’s 35-3 romp are still on that UAB sideline. Highlights were few for South Alabama, with some big plays on defense being the only good news on the day. They have a largely-new cast on offense to try to even the score this season and get this matchup in Mobile, which should help. Still, forming an overly-optimistic viewpoint on South Alabama in this matchup isn’t all that easy to do.

What Can South Alabama Do About This UAB Offense?

Again, a lot of the same faces are on the UAB offense that took it to the Jaguars last season. Losing Tyler Johnston, III. to a shoulder injury throws a different light on it. Granted, an inexperienced guy playing Miami wasn’t likely to work out, but Bryson Lucero was pretty shoddy in relief of Johnston. He was better, however, against Central Arkansas, and this could be more in his wheelhouse. Add in backs Spencer Brown, Lucious Stanley, and Jermaine Brown, Jr., and you have three weapons upon which Lucero can rely. There is also a nice mix of experience and potential in the receiving corps that Lucero should be able to make it work. And being on an offense that stresses the run so much, maybe he’ll be OK.

Still, the Jaguars were tormented by Johnston, III. last season and with him not in there, it could give them the “in” they need to at least make this marginally-competitive. They really undermined themselves, especially late, in their last game against Tulane, which was South Alabama’s debut in this new stadium. And what better way to get their first win than to beat a good team that dominated them last season? Even with the QB change, it won’t be easy.

Signs of Life From the Jaguars?

In the Jaguars, we have a team that has gone from 4 wins in 2017 to 3 wins in 2018, bottoming out with a two-win season in 2019. Head coach Steve Campbell has found sustainable success elusive in his two seasons and change at the helm with a 6-20 record. Winning on the road against Southern Miss is nice, and beating Tulane was undoubtedly in the cards before the Jaguars melted a bit in the second half—not a great way to open your new stadium. Still, there are at least hints that South Alabama could graduate from the ranks of a doormat and therefore, give UAB something to think about.

South Alabama quarterback Desmond Trotter has more experience, but we’ve seen the Jaguars working in Chance Lovertich, and we’ll see how they balance QB-play moving forward. They’ve seen signs of life from Carlos Davis, who looks to take over lead RB duties and has been effective through two games. They have a nice three-pack at wide receiver, with Jalen Tolbert, Kawaan Baker, and Jalen Wayne looking like they’re going to be able to step it up a notch in this offense. But other than the ball-catching crew, they’re looking for a lot of inexperienced guys to deliver. Then again, what good was the experience last season when the Jaguars put up two wins?

Boiling Down the Factors

South Alabama’s offense is unproven, but it’s also not known how good they might be. There are some new faces from the squad that got slaughtered by UAB last season, and maybe that’s a good thing. Still, until given reason to believe otherwise, South Alabama represents the lower-reaches of the Sun Belt. At the same time, UAB has resurrected their program and become a force in the Conference USA with 20 wins in their last two seasons.

There are some factors that could suggest this won’t be a repeat of last season’s debacle for South Alabama. They seem to have a little more life this season overall. This one is at home. UAB is suddenly without the guy in Tyler Johnston, III. who was a big part of the winning equation last season and whether they are the same team of the last few seasons is a bit up in the air. Nevertheless, the UAB defense is mostly intact, and though it hasn’t looked great through two weeks, they could be finding their groove. And with the Blazers able to run the ball well, so their liabilities don’t stand out so much at quarterback, I still see them controlling this game, at least to the extent where they get out of Mobile with the win and cover in this in-state battle.