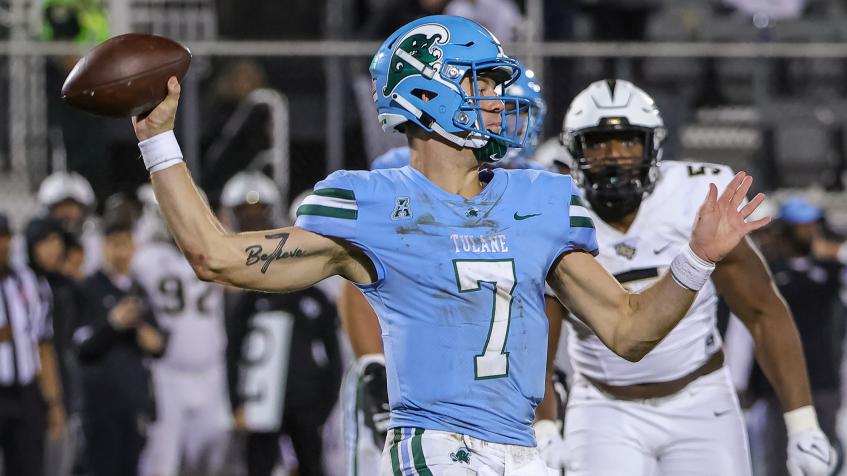 The Knights are going for another win, as in their last game, they defeated South Florida, despite entering as the betting underdog. In the win, UCF completed 82.8% of their 29 passes, three of which resulted in touchdowns. The team ended the game with three rushing touchdowns, along with a total of 345 yards on the ground.

So far, quarterback John Rhys Plumlee has a passer rating of 94.5 while completing 176 of his 273 attempts. Currently, he has a total of 2195 passing yards. Receiver Javon Baker heads into the game, as the team’s leader in receiving yards, with a total of 710. The Knights have turned to running back RJ Harvey a total of 107 times for a total of 733 rushing yards.

In their previous game, the Green Wave picked up a 27-24 home win over Cincinnati. This was an impressive victory as they were also the 1.0-point underdogs. In the win, Tulane completed 59.1 of their 22 passes, 1 of which resulted in a touchdown. The team ended the game with two rushing touchdowns, along with a total of 221 yards on the ground.

Michael Pratt heads into the game as the team’s top quarterback, with a current passer rating of 109.17 on a total of 2382 yards through the air. Shae Wyatt leads the team’s receiving corps with 30 catches for a total of 582 yards. The top option in the run game for the team is Tyjae Spears, who has carried the ball 190 times for a total of 1177 yards.

Over the Knight’s last ten games, they have a strong record of 8-2-0 while also going 6-4-0 against the spread. They maintained a positive scoring differential in these games by averaging 34.9 per game and allowing 22.6. Their last ten over-under record is 4-6-0.

When looking at their past five road matchups, UCF has an ATS record of 3-2-0 while averaging 34.4 per game. The team went 4-1-0 overall in these games.

Against the spread, Tulane have gone 8-2-0 in their last 10 games. Over this same period, their straight-up record is 8-2-0. Their last ten over-under record comes in at 6-4-0. Tulane has a positive scoring differential in these games, averaging 31.9 points per game and allowing 22.8.

Across their five previous home games, Tulane has an ATS mark of 3-2-0. Their straight-up record in these matchups was 3-2-0, averaging 35.2 points per game.

So far, the Knights are averaging 34.92 points per game on offense, which is good for the 23rd most in college football. So far, they have 3rd down conversion rate of 51.0%. This week they will be facing off against a Tulane defense that is 31st in points allowed and have allowed opponents to convert on 3rd down at a rate higher than the NCAA average in just 3 of their game.

One aspect of the game that could benefit a UCF offense that struggles to generate big plays in the passing attack is that they are facing off a Tulane defense that has yet to generate a lot of pressure on opposing quarterbacks. So far, the Green Wave are just 152nd in sacks per game.

This season, UCF has relied heavily on the ground game, as they rank 9th in attempts per game, with an average of 44.25. This heavy usage has led to an average of 243.25 rush yards per game, placing them 6th in the NCAA. This week, the Knights will face a Tulane defense ranked 104th in rush yards allowed per game. This year, they have averaged 277.89 yards per game when facing defenses ranked outside the top 50.

Heading into the game, the Green Wave are ranked 26th in points per game and are matched up against a defense allowing an average of 21 points per contest. If the team is going to get their passing game going, they should have ample opportunity against a weak UCF pass rush.

This season, Tulane is averaging 41.0 rush attempts per game, good for 35th in the country. In terms of production, they are 20th in yards per game at 192.33. This week, the Green Wave will be facing a UCF defense that is ranked 97th in rush yards allowed per game. So far, they are averaging 208.1 yards per game when facing defenses ranked outside the top 50.

Tulane’s star RB Tyjae Spearsplayed just one down in the second half in the 38-31 loss to UCF earlier this season and with him healthy this go around I expect him to be the difference maker. The Green Wave win this and get the cover. Bet your Week 14 college football predictions for FREE by taking advantage of a 100% real cash bonus up to $500 at the web’s oldest and most trusted sportsbook when you enter bonus promo code PREDICTEM on the Special Offers page at Everygame Sportsbook! In business since 1983!