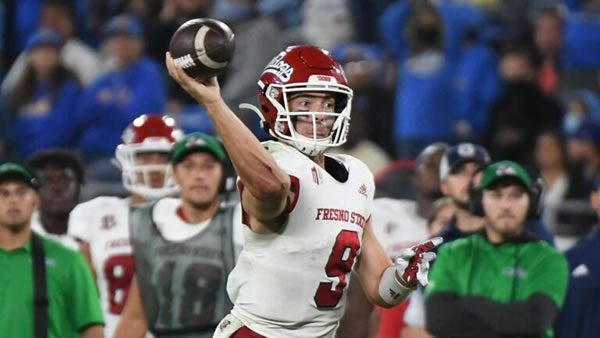 The UNLV Rebels come up north to take on the Fresno State Bulldogs in a Mountain West Conference showdown on Friday night. Fresno State scored a miraculous win on Saturday, upsetting 13th ranked UCLA, 40-37, in a victory that will prove to be memorable for Bulldogs fans. So far, they’ve been solid at the betting windows, covering all four of their spreads. UNLV will have their hands full, having gone winless in three games with just one cover. On Saturday, they absorbed a hammering at home, losing to Iowa State, 48-3. Who can notch the cover at Bulldog Stadium on Friday night?

Watch Out for Fresno!

They lost once this season, falling to Oregon earlier this month by one score as big underdogs. So far, they’ve covered all their spreads by a combined 62 points in 4 games, proving to be a great value this season. But that might change this week following a high-profile win. Coach Kalen DeBoer appears to have this team pointed in the right direction, playing with a lot of spirit. On Saturday, a late Fresno TD put them on the precipice of a big win before the Bruins scored a TD with 54 seconds left. Fresno then miraculously marched down the field, with QB Jake Haener connecting with Jalen Cropper with his 14th catch and the winning TD. Haener had 455 yards, Cropper was dominant, and RB Ronnie Rivers was great in spots.

Haener, a Washington transfer, is really coming into his own after an up-and-down season last year amidst difficult circumstances. Granted, it will be determined later how well they fare against the better teams in their conference, but hanging in there with Oregon and then beating UCLA shows the Bulldogs acquitting themselves well against ranked teams. It bodes well for a big season and certainly provides a road matchup to UNLV that appears to be well out of their reach. Haener and his complete offense would seem to be a big task for the Rebels. Haener is averaging over 350 yards passing a game, and with Rivers doing damage too, it’s a lot for a team like the Rebels to contain.

Last season, in a truncated schedule, these teams faced each other in Las Vegas, with Fresno taking down a 40-27 win. They only managed to take the lead late in the first half before pulling away a little bit. Both Haener and Rivers ran well, combining for 212 yards on the ground with four scores. Haener was a little subdued through the air, but UNLV might be seeing the improvements first-hand in Fresno this Friday.

UNLV As Bad As They Look?

The Rebels will be without much of the offensive talent that enabled them to vaguely hang in there with the Bulldogs last season. They still have RB Charles Williams, but this season shows that they’re not even that plucky. And they weren’t that plucky, to begin with, as head coach Marcus Arroyo still hasn’t tasted victory at the helm of UNLV, already in the fourth game of year two of his tenure. Losing and covering against Arizona State wasn’t so bad. And they were out of their realm against Iowa State last week. But you throw in a week one loss to Eastern Washington and the winless season in 2020, and the picture starts to form. To put it mildly, it’s not pretty.

Granted, coach Arroyo has a lot to fix, and some growing pains had to be anticipated. Still, for them to bottom out this hard is a bit of a setback for this program. The offense appears to be rudderless. The defense is just sort of there, not really putting up suitable resistance. So the question arises, what can they come up with against a Fresno team that is showing a lot of fighting spirit and overall improvement? And being on the road in the bog of Bulldog Stadium would only appear to make this even more of an impossible uphill battle.

With UNLV not really making much sense from strictly a football point-of-view, you look for other angles. After some rough spots on their schedule, isn’t it normal to expect Fresno to ease up on the urgency scale this week? Coming off a blood-and-guts game against the Bruins, one could make a case for them to ebb in this undemanding matchup. In addition, a high-profile win against a ranked team likely means Fresno will cease being the betting bargain they’ve been through four games this season. It doesn’t reflect well on UNLV that their best case to cover the spread consists of everything but what they do well on the field. Nevertheless, there is a value component to account for this week. Even though Fresno has been overachieving, this is the type of week where the oddsmakers come in and declare that the party is over.

Urgency and respect for the opponent aside, taking UNLV and just hoping that the roof doesn’t cave in seems like a dicey proposition. A better 2020 UNLV team didn’t have much defensive success against a Fresno team that was still coming around last season. It could be in deep against an improved Bulldogs offense that has really come into its own. UNLV is usually pretty bad, but I think the depths of how bad they are will be revealed more fully in this spot than some suspect. I’ll take the Bulldogs.

Loot’s Pick to Cover the Point Spread: I’m betting on the Fresno State Bulldogs minus 31.5 points. Knock FSU down to a -11.5 favorite by inserting them into a massive 20 point college football teaser only found at Wagerweb Sportsbook!