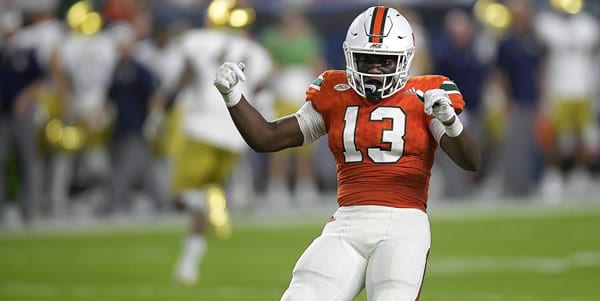 Trying to get a read on the ‘Canes this season has often been a futile undertaking. They gave a good Florida team a run for their money to open the season, before losing to UNC as favorites. They smashed Bethune Cookman, before narrowly beating Central Michigan as 30-point favorites and then falling to VT by seven as 14-point favorites. They do things effectively on both sides of the ball while being so incomplete and inconsistent that they’re one of the harder ACC teams to figure out so far this season.

Again, there are some areas where the Hurricanes thrive, and we’ll see how it comes off against the Cavaliers. Miami can air it out pretty well on offense. They have some talented ball-catchers and are able to rip off big chunks on occasion—however inconsistent it may be. The QB situation might be foggy after redshirt freshman Jarren Williams was putrid against Virginia Tech, with N’Kosi Perry stepping in and throwing for 422 yards and four TDs, nearly leading a big Miami comeback. With Williams looking a bit roughed-up with an injured arm after last week, one might look for Perry to try to pick up where he left off, but coach Diaz says Williams in their guy. With Brevin Jordan, Jeff Thomas, KJ Osborn, Mike Harley, and others, there are many avenues to success aerially. With Miami’s run-game not making much of an impact, it might be hard for this Miami offense to show much variety on Friday.

How the Virginia Defense Matches Up

This has been the calling card for the Cavaliers this season—a well-balanced and stout defense. They looked good for the first 4.5 games of the season, even leading Notre Dame at halftime before mistakes derailed their chances at an upset win. This defense gets after it and looks likely to disrupt the Miami pocket with a heavy pass-rush. The front seven is heavy on athleticism and aggression. They’re allowing just over 95 yards a game on the ground, and Miami looks to have a difficult matchup on their hands in that area. But even Miami’s aerial attack will be up against it versus a Virginia pass-defense that ranks 21st in that category, led by Bryce Hall, who has been shutting down receivers through five games.

Can Miami Keep This In Control?

To their credit this season, the Hurricanes defense has been superb in containing the opposing rush. Along with Virginia, they are one of a handful of teams allowing under 100 yards per game on the ground. The ‘Canes aren’t even allowing 80 per game. And it’s not like their pass-defense is terrible. It’s not great, but in allowing just over 21 points per game, the Miami defense has held its own. At home against a Virginia team whose offense is not as good as their defense, you can start to picture a scrappy home Hurricanes team managing to keep this one respectable and within range. Head coach Manny Diaz will look to take a greater role with the in-game guidance of this unit. After giving up 42 to Virginia Tech, he felt a change was in order and that a defense that showed so much promise last season was headed in the wrong direction.

The Miami defense we saw last week will be easy pickings for a Virginia offense—even one that has its own issues, as well. They have gone on spurts this season, putting up a big total against William & Mary and going on a late spurt against a good Florida team in their only loss. But it’s a unit that lacks consistency. Quarterback Bryce Perkins has put up some yards this season, working with Hasise Dubois and Joe Reed, who doubles as a very dangerous return-man. And while Wayne Taulapapa has five TDs, his 3.7 yards-per-carry rate is endemic of a Cavaliers’ run-game that features a lot of lethargy. Perkins TD-to-INT rate has suffered this season at 8/6, following a 25/9 spread last season. It’s an offense with some compelling weapons, namely Reed, but it’s also kind of one-dimensional group that a higher-form Miami defense at home could potentially stifle.

The Cavaliers have a lot more life in their program with Bronco Mendenhall calling the shots, and it hasn’t always been smooth, but they’re ranked, and that’s a far cry from where they were a short time ago. Coming off a break following a loss, one would expect them to deliver a solid showing this week here in Miami. While Virginia will complete some big plays on offense, mostly through the air, there is enough spark within this Miami offense to keep pace. At home and with some extra urgency in the program this week and needing a conference win, I see Miami being pumped up enough to eke out the cover at home this week. I’m taking the ‘Canes.

Loot’s Pick to Cover the Point Spread: I’m betting on the Miami Hurricanes minus 1.5 points. Bet your Virginia/Miami pick at an online sportsbook that offers parlays, teaser and pleasers where you can lose some games and still get paid! These special wagers are called “Progressive” bets and are offered at 5Dimes Sportsbook! (They also offer -105 on sides/totals instead of -110!)