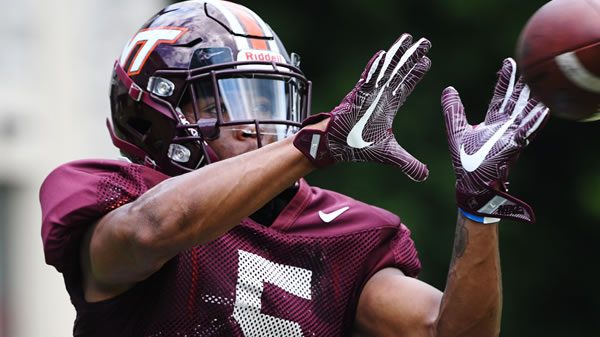 Point Spread: VT -3/BC +3 (Intertops - Grab a 200% bonus there! How? Sign up through our special link, deposit $25, go to their Special offers page and enter bonus code ROOKIE200 and a FREE $50 bet will show up in your account balance!)

Bowl hopes are fading fast for Boston College, which has now lost four straight as Denis Grosel proves that he’s no Phil Jurkovec. Grosel came on in relief and won his first two games over Temple and Missouri, but the Owls and the Tigers have proven to be relatively weak squads. As the Eagles have gotten into ACC play, their offense has averaged a mere 10 points per game.

Things might get worse before they get better against Virginia Tech, which has mostly played tough defense and isn’t one to try to get into a shootout. The Hokies would rather keep the ball on the ground with Malachi Thomas and Raheem Blackshear and let Tre Turner take care of the big plays when they become necessary. With BC’s offense looking pretty punchless as of late, this seems to have the making of a lower-scoring contest.

How the Public is Betting the Virginia Tech/Boston College

The public is siding with the Hokies here, as 63 percent of tickets are coming in on Virginia Tech. However, the spread hasn’t budged, while the total has ticked down half a point from 47 to 46.5.

There was nothing pretty about the Hokies’ win over Georgia Tech. Virginia Tech ended up scoring two touchdowns early, but the offense petered out for the Hokies in the rest of the game, and they only ended up scoring four field goals the rest of the way.
That’s both the good and the bad for the Hokies, as they were able to put up a ton of yards against the Yellow Jackets, but they weren’t able to cash in their drives for anything more than 12 points after they got off to a strong start. They might be able to get away with that against the likes of Boston College, but against stronger opponents, the Hokies are likely in trouble. Virginia Tech needs to get the job done in the red zone if it’s going to save Justin Fuente’s job and reach a bowl.

When Boston College Has the Ball

BC’s defense did a lot right in holding Syracuse to 65 passing yards last game, but it didn’t matter because the Eagles couldn’t get much of anything going in either the passing game or on the ground. Boston College has not looked right since losing Jurkovec, and as the schedule has improved, the Eagles haven’t met the challenges ahead of them.

Pat Garwo did a decent job of running the football, but the Eagles only gained 251 yards for the game against the Orange and watched Syracuse completely swing the game’s momentum away from them. Opponents seem to have figured out that with Barry banged up, the only real passing threat is Zay Flowers, and if they can stop him, it’s going to mean stopping the Eagles’ offense. Garwo should be able to find some holes in the VT defense, but the lack of a passing attack means that BC will have a hard time scoring touchdowns instead of field goals.

Virginia Tech has really struggled to get the job done on the road, as the Hokies have just two covers in their past nine games away from Lane Stadium and have just one cover in their past five visits to Chestnut Hill. Not only has BC played well against Virginia Tech in recent matchups, but the Eagles are 6-2 ATS in their past eight games at Alumni Stadium.
But the offensive issues have been on full display for the Eagles, as the under has cashed in four straight contests. The Hokies haven’t exactly been lighting up scoreboards in ACC play, as they’ve gone 5-1 to the under in their past six conference contests. The teams did play over the total in each of their past three games, although their offenses were a sight better than they are this year.

This could be a classic cold New England evening for football, as temperatures are set to drop to 32 degrees before all is said and done. Winds will blow at five miles per hour northwest.

Boston College is simply not the same team that it was a few weeks ago, as losing Jurkovec has the Eagles looking like a ship without a port. I don’t expect this game to test VT quite as much as the spread suggests; I think the Hokies can come into this game and emerge with a victory that gets them one win away from bowl eligibility.

I’ll take Virginia Tech here. Bankroll running low? Instead of re-depositing and getting nothing (or a tiny reload bonus), consider doubling your bankroll with a GIANT 100% real cash bonus on your first deposit of $100 to $500 at GTBets Sportsbook! They have an awesome rewards program!