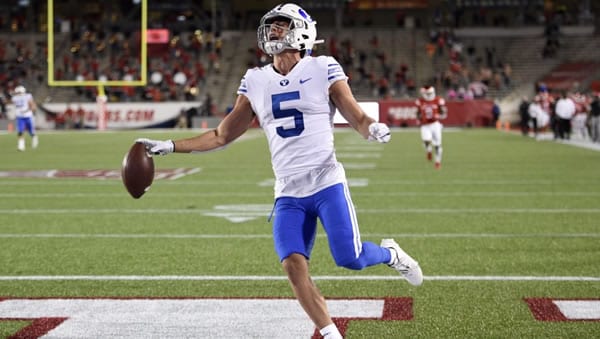 The Western Kentucky Hilltoppers come to LeVell Edwards Stadium on Saturday for a showdown with the unbeaten BYU Cougars. You have a stark contrast here from a betting standpoint, with the Cougars 5-1 ATS and the Hilltoppers an abject 0-6 at the betting windows. Last week, BYU smashed Texas State, 52-14. They look for more of the same this week with a 2-4 Hilltoppers squad coming into town. To their credit, the Hilltoppers won last week, nipping Chatanooga, 13-10, with a late TD. But let’s face it, this looks to be a pretty tough spot for the Conference-USA Hilltoppers.

Smooth Sailing for the Cougars

One of the byproducts of the Pac-12 and Mountain West starting so late is that BYU has been in pretty easy, beating up on teams from the American, Sun Belt, and Conference USA. And for the most part, they haven’t been playing the top-half of teams from those conferences. They haven’t been tested yet, but they look super-strong at 6-0, with an offense averaging over 45 points a game. QB Zach Wilson has been in great form, completing over 78% of his throws with 16 TDs and just one pick through 6 games. He has also run in 6 scores. And I’m not sure BYU having it so easy is a bad thing, at least as it pertains to this game.

With such a soft schedule, they haven’t had much of the same mental and physical wear and tear that other teams have, even if some players are injured. And as a weird quirk of the season and all that has gone into making it strange, the Cougars will be having their fifth spot at home in their last six games. So you have a good team at home, slapping around teams that aren’t on their level. Now they’re at home again with another such team coming into town. And these teams are not squads that have any experience playing in this region. For the most part, you’re not going to see teams like Western Kentucky playing anywhere near Provo. What you end up with is a BYU team as a big favorite against lesser teams playing out of their element. So far, it’s worked like a charm.

Could a Comedown be Coming for BYU?

In a lot of ways, the BYU headspace could end up determining who covers the spread this week. On the one hand, one wouldn’t expect complacency for a BYU team that hasn’t experienced much overall success in recent seasons. They have nothing to be arrogant about, with this being their best stretch of success under Kalani Sitake. And with so few nuggets on their schedule to make an impact, they’re reduced to running the score up on these opponents to make their point.

Still, it’s a dicey game to play when laying close to 30 points in games. And the only time BYU failed to cover this season was at home in a similar spot when they were favored by 34 over UTSA and won by only 7. So it has already happened where the Cougars weren’t shot from a cannon in this type of spot. And there is just something so obviously-simplistic about continuing to take BYU in these spots and hope they keep crushing this level of opponent. It’s almost too obvious to work.

What Can WKU Do About It?

A 2-4 record and not covering once in 6 games paints a rough-looking image, especially when taking that team out of its element against a 6-0 team that is flying high. After a two-TD loss to Louisville to open their season, WKU lost to Liberty by 6, beat Middle Tenn by 3, before losing to a pair of good teams in Marshall and UAB by 24 and 23 points, respectively. Last week’s win was tepid, but they’ve at least been vaguely-steadfast in their games, hanging in there against teams on their level while avoiding outright blowouts to the better Conference-USA teams they have faced. Avoiding blowouts is no reason to bet them, perhaps, but they’ve at least been somewhat respectable. Still, after missing the spread by a half-point against Louisville, they’ve since missed covering by a combined 65.5 points in their last five games. And that really doesn’t paint a great image of a team that really seems to be up against it this week.

WKU struggles at the QB position, with both quarterbacks Tyrrell Pigrome and Kevaris Thomas struggling to complete passes. Pigrome does have seven TDs and no picks while sometimes showing a nifty set of legs. Mitchell Tinsley leads a decent receiver crew, but it’s just been hard for this offense to really turn over and while scoring between 13-24 points in all their games speaks to a certain consistency, it’s not going to be enough in this spot.

While readily acknowledging that these home spots where the Cougars are laying four touchdowns or more could dry up, certain facts are hard to ignore. One is the prospects of this WKU offense going against BYU’s hogs on defense and what that might look like. BYU’s offense, with Wilson really putting together a fine season, along with guys like WR Dax Milne and RB Tyler Allegeier in such fine form, I’m not sure this is the spot where the gravy train ends. Granted, both teams are due for the opposite, but I see BYU laying a pretty sound beating on WKU this week. I’ll take the Cougars.

Loot’s Pick to Cover the Point Spread: I’m betting on the BYU Cougars minus 28.5 points. Bet this game and ALL your football bets at -105 reduced odds at BAS Sportsbook! Making the switch to discounted odds will save you a TON of money over the long haul! Click here to start saving today!