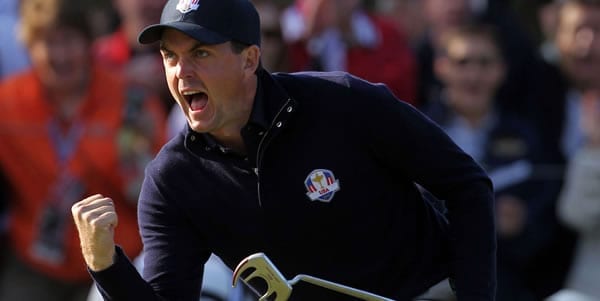 If you like your PGA Tour tournaments with fast scoring, make sure to tune in this week for The Rocket Mortgage Classic. This tourney will be the second installment of The RMC, and we can only hope for the fireworks we saw during the event’s debut. Ten-under par wasn’t even enough to net a top-40 finish last season at Detroit Golf Club, and this year could produce similar numbers with a stronger field in attendance and some course familiarity now in the bags of most pros. Nate Lashley finished at 25-under par and cruised to a six-stroke victory in what was his first PGA Tour win. He posted a pair of 63’s to make Sunday a bit of a formality, but Bovada doesn’t think he has much chance of defending his title as they have installed him at 125 to 1 odds to win this week. Doc Redman was Lashley’s closest competitor in 2019, and he is much shorter at 40 to 1. Bryson DeChambeau at 7 to 1 is by far the betting favorite, and he is looking to continue a run that has seen him in the top-10 in all three events since play resumed. Webb Simpson, Hideki Matsuyama, Rickie Fowler, and Viktor Hovland are all drawing a lot of betting attention as well, and we should see a closer finish this time around with a few more big names teeing it up.

Detroit Golf Club is a newcomer to the Tour rotation, but the course has roots back to 1899 and boasts Donald Ross as the lead designer of the Championship Course. At 7,340 yards, the par-72 course seems to be too long to be considered “easy,” but DGC ranked as the sixth-easiest course during 2019 play with the field averaging nearly two strokes under-par per round. Ross designs are relatively simple compared to many modern-day layouts, so it is really up to the tournament organizers to set the level of difficulty. A Ross design like East Lake has been tailored to produce a true Tour Champion, and we are all familiar with how nasty Pinehurst can be when the USGA gets its hands on it. Detroit is comparatively tame, and last year showed that the field can attack and score, nearly at will. This is also an event to watch players move fast both up and down the board as a normally respectable round of 3-under can have you backsliding as several others are posting 6-under or better.

Each week, we take a look at the online betting sites and highlight the best values on the board. We make a short, middle, and long odds pick to win and breakdown a couple of head-to-head matches that you can find at just about every golf betting outlet. Odds and pairings for this week can be found at Bovada. Here are our picks to win the 2020 Rocket Mortgage Classic.

Reed won in Mexico shortly before play was halted, and he enters as the 7th best player in the world, also ranking 5th in the FedEx race, so he is checking both the short and long term trend boxes. He was T5 here last season, and that finish could be considered a bit of a disappointment as he carded a 70 on Sunday after putting himself near the lead with a Saturday 65. In general, I like his top-8 ranks in both birdies and scoring, and those scoring marks are led by one of the best putters on Tour today. Reed is rather average in many ball-striking categories, but he leads the Tour in one-putt percentage and is 3rd in GIR putting and overall putting average. Patrick is also a solid player around the greens, ranking 31st in overall scrambling and 27th in sand saves. Those are the little details that keep you from giving back strokes in a shootout, and Reed is a good play this week with a lot of focus on Bryson at the top.

At 30, Finau is a bit old to be a real up-and-comer on Tour, but the fact is he is consistently gaining traction toward being one of the best players out there. He has been a fixture inside the top-20 on the OWGR list since 2018, and he has five top-10 finishes in his last nine Major starts. Over that same span, he has lost twice in a playoff to the likes of Xander Schauffele and Webb Simpson, so he has been just shy of truly breaking through and pushing to that next level. He is making his first start at Detroit, but I like his chances to utilize his longball game and top-30 GIR percentage to produce volume birdie opportunities. He is the 8th best tee-to-green player on Tour, and while he is a statistically average putter overall, he improves to 42nd in GIR putting so he can hang in a fast scoring environment. Like Reed, Finau is talented in the short game, ranking 6th in strokes gained around the green, and that is a nice bookend stat to his long driveability.

Bradley is simply one of the best ball strikers in this field, and that has traditionally meant something at Ross courses. Ross’ domed greens are no match for players that can hit it close, and Keegan ranks 10th in approach proximity. He is 66%+ in both fairways and greens hit and ranks 19th in strokes gained on approach. He almost always sets himself up to see the number of raw birdie chances it takes to be a contender, but the issue is often an uncooperative putter. Bradley is just 178th in strokes gained with the putter, accounting for about a half stroke loss to the field. I don’t see a lot of interesting long shots this week, so I’m taking Keegan here based on that elite ball striking and making the dart throw that he has a hot streak on the greens.

Hovland is a moderate underdog here but has a nice profile to actually be favored considering he has three consecutive top-25s since play resumed, including a T11 last week. Both players were T13 here last season, but Hovland and his Sunday 64 showed a bit more ability to go low. I don’t think either player is in danger of missing the cut, and I like Viktor’s edge in fairways hit, and he is generally the better player off the tee between the two. Matsuyama is slightly better with the irons, but Hovland again has the advantage on the greens. His scoring average is considerably better than his birdies per round, meaning he is more efficient with his chances and making fewer mistakes. I expect another close match at a course where both should fare rather well, but Viktor has been just a bit better in the short term, and that slightly better putting average is going to pull him through.

I was all over Dustin Johnson at even money last week, and I love the even money plays in general, but I’m showing some willingness to depart when appropriate as I think Snedeker cruises against Kisner. Brandt was eight shots better than Kevin here in 2019 and is 18th in putting average while Kisner is back at 91st. I think that maybe enough by itself, but Snedeker is also leading in total strokes gained, birdies, and scoring average. All of those point to his ability to score, and we are in a shootout week, so keep it simple there and take the big favorite when they have that kind of gas in the tank. Neither player happens to be hot at the moment, so don’t expect either to make a run toward the top, but Kisner is more likely to miss the weekend and give a free W to Sneds, in my opinion. I have Brandt as a fringe top-25 play with Kisner in the next group back, more like 35th to 50th.