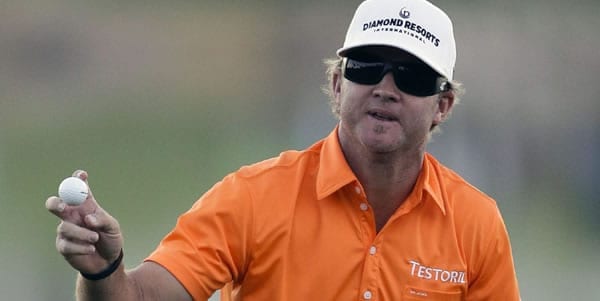 There is always championship golf being played somewhere in the world, but this week is your last chance to catch PGA action in 2019 as the RSM Classic serves as the last official stop of the calendar year. The Presidents Cup is going to make for a fun watch in a couple of weeks, and there are some unofficial events that will spawn some storylines to take us into 2020, but the RSM is really the last chance for players to jump-start their season. Exemptions into WGC events or Major fields are always on the line, and the pressure ramps up right away as the first full-field event in 2020 is fewer than 90 days away from the start of The Masters. There is no time like the present on Tour, and the new playoff system means there is no longer such a thing as a meaningless event.

Charles Howell III will be defending his 2018 RSM title this week against a veteran field that includes 2015 champ Kevin Kisner as well as Webb Simpson and Billy Horschel. Fan favorites like Zach Johnson and Jim Furyk will look to turn back the clock a bit, and a strong contingent of young players like Maverick McNealy and Scottie Scheffler will tee it up at Sea Island.

The Seaside Course at Sea Island Resort has been the host of the RSM since the event joined the fall schedule in 2010, but the Plantation Course joined as co-host in 2015. Players will log one round at each course before the cut is made with rounds three and four being played exclusively on the Seaside. Both courses are just over 7,000 yards, and the Plantation was notably renovated by Davis Love III to bring the course up to modern standards while still being heavily influenced by historical golf design elements. Winning scores at the RSM have been at 14-under par or better, and it has taken at least 17-under to win since the event started using two courses. The average winning score has been 19.75 strokes under par since 2015, with Kevin Kisner setting the tournament record of 22-under during his win. There has been a theme amongst the winners and contenders that points to ball striking and accuracy are more often rewarded than power. Green complexes here are subtly difficult, but there are greens that have championship zones that will see pin placements through the week. The best iron players will be able to access those tough pin locations, and net easier birdie looks on the way to that 20-under par threshold.

Each week, we take a look at the online betting sites and highlight the best values on the board. We make a short, middle, and long odds pick to win and breakdown a couple of head-to-head matches that you can find at just about any golf betting outlet. Odds and pairings come courtesy of the board at Bovada. Here are our picks to win the 2019 RSM Classic.

Kuchar got off to a slow start last week in Mexico but carded a Sunday 62 that was good for the low round of the tournament and moved all the way up to T14 in his Mayakoba title defense. That final round was reminiscent of his solid play in 2019 that saw him win twice with two more runner-up finishes, and he should be ready to roll in his home state of Georgia. Kuchar finished last season in the top-20 in greens hit and putted well enough to produce the 14th best scoring average. That is one of the best scoring marks in the field this week, and he also finished the season inside the top-30 in overall tee-to-green performance and scrambling. Both of those skill sets should serve him well at Sea Island and should be near the top of the leaderboard this weekend.

Gay is a light hitter off the tee, but these courses do not require the long ball. Control is the name of the game, and Gay ranks 11th in fairways to get things started off in good shape. He is a top-30 putter overall and ranks 24th in one-putt percentage. He is solid around the greens, ranking 22nd in scrambling, and that helps net the 29th best scoring mark. He has been busy this fall with six made cuts in six starts and four top-25 finishes, including a T7 at the Shriners and T3 in Bermuda. He was T3 here last time around and should put his ball-striking talents to work again this week.

If you follow the human interest side of golf, you know that Kirk took a leave from the Tour earlier in the year to address alcohol and depression issues. That is a never-ending battle for most people, but Kirk appears to be in a much better place in his personal life, and his professional life looks back on track as well with a nice T33 at the Mayakoba last week in his first action back. He is the 2013 RSM champ and remains very well suited for the course. Going back to his last period of PGA play, Kirk was top-60 in both fairways and greens for the 35th best mark in overall tee-to-green play. He isn’t an elite putter but does well enough on the greens to net a top-50 scoring mark and handles the clutch putts well, as evidenced by a top-10 mark in scrambling. Maybe it is a little too early in his return to think a win is likely, but playing with a clear head and a renewed motivation for the game is hard to beat. Best of luck on and off the course, Chris.

This is a tough pick as Kisner is precisely the kind of player that should do well here, but the results have not been there for Kevin in the fall. He hasn’t missed a cut in three starts but was 66th of 76 players at the ZoZo and finished 76th last week in Mexico. English was 5th last week and has not missed a cut in five fall starts with four top-10 finishes. Harris is a little behind in fairways hit but owns the edge in greens in regulation and is nearly 100 spots better in birdie average. With significant advantages in off-the-tee and tee-to-green metrics, I feel like English is going to be a difficult player to beat this week while Kisner is taking himself out of contention more often than not these days. Kevin will get it back together eventually, but I’m betting against him until he proves it.

This is another match that mostly comes down to recent results, and Scheffler has a 3-1-1 mark against Knox when they have played in the same event this fall. Overall, Scheffler has made the cut in each of his six starts this season, so he isn’t experiencing any boom-and-bust results that make your nervous, and his four top-25 finishes are three better than Knox at this point. Quantity and quality are both on Scottie’s side so far. The small danger here is that Scheffler is a power player, while Knox fits the control mold much better. If Scottie gets wild, this course will frustrate and neutralize any advantage he gets from that power. The good news is that Scheffler is quite a bit ahead of Knox in tee-to-green performance, so it isn’t just the power game is being relied upon. Russell is only 109th in birdies and 162nd in off-the-tee performance, so I see another finish north of the top-30 for him while Scheffler profiles inside the top-25.