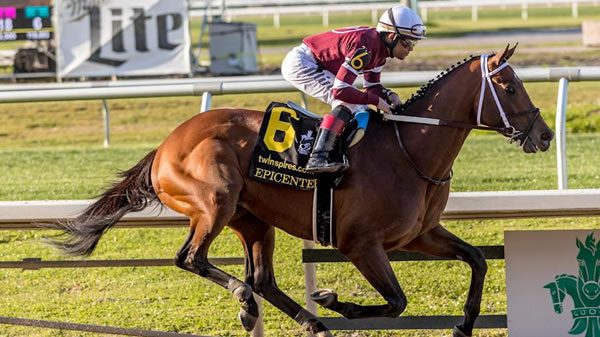 Epicenter solid favorite in Preakness, Early Voting has to be caught

Epicenter is the horse to beat in the 147th Preakness Stakes, and no one will argue that. He got a nice trip behind the speed in the Kentucky Derby and did exactly what was asked of him down the long Churchill Downs stretch, gutting it out to hold off Zandon only to be surprised late by 80-1 shot Rich Strike. He should get a similar trip in here behind the speed, and the only way they’re going to beat him is if someone takes a round out of him in the stretch, as they did in the Derby. He runs his race every time, and the question is does he have one more good race in him after seven races in a row with no real break.

Early Voting looks like a good, solid class speed horse. He opened up in the Wood Memorial and set a fast pace before succumbing late to Kentucky Derby fifth-place finisher Mo Donegal, but that was off a two-month layoff, and he could improve again in here for top trainer Chad Brown. Early Voting is quick from the gate and will likely play his usual game here, opening up early, rating, turning back his rival speed horses on the final turn, and opening up into the stretch. He may have distance limitations, but it’s difficult to tell for sure. He’s certainly good enough to make a solid bid in the stretch and might just hold on at a decent price. Threat to steal it.

Simplification had a reasonably good trip in the Kentucky Derby and finished decently to hold on to fourth money. He’ll get the trip he needs behind the speed in here, the question is whether he can outkick his rivals, including the only filly in the race, Secret Oath. Simplification is an honest horse, but he’s more of a grinder than a quick move surprise horse. However, he has numbers that are close to Epicenter, and an upset is not out of the question.

Secret Oath didn’t get a great trip against the boys in the Arkansas Derby two starts back but came back with a better trip and race in the Kentucky Oaks to beat her own kind. Back in against the boys here, she does have a shot, but only if her move is timed perfectly. She can produce a quick turn of foot on the turn when asked, but only for about a quarter mile, after which she’ll have to grind it out down the lane to win this. If she’s going to beat Epicenter and the boys, she’ll need a clean trip behind a pressured pace, and she’ll have to make a quick move to the lead late on the turn. Even then, she might not be good enough. Hall of Fame trainer D. Wayne Lukas has won the Preakness six times. Fillies have won the Preakness six times. It’s possible, but…

Click Here
Skippylongstocking rallied late to finish third in the Wood Memorial behind Mo Donegal and fellow Preakness entrant Early Voting. He should rally late but is probably best used only in the third and fourth slots in the Preakness Superfecta at best.

Creative Minister parlayed a nice trip to win an allowance/optional claimer at Churchill Downs in his last and has now won two in a row. He makes his fourth lifetime start while moving up in class, and these are much tougher than what he’s been facing. He’d need to improve by at least three lengths to beat the best in here, and we’re not sure he can do that. His dam has produced some graded stakes horses, including Wood Memorial runner-up Battalion Runner, so he may have another class move in him, but it is a guessing game.

Happy Jack was beaten 12 1/4-lengths by Taiba while finishing third in the Santa Anita Derby and came back to run a similar race in the Kentucky Derby, finishing 14th, beaten 19 lengths after passing tired horses. He would have to improve dramatically while hoping the whole field melts down in the stretch. We just can’t see that happening. Armagnac finished a neck behind Happy Jack in fourth in the Santa Anita Derby and looks like he could be part of the early pace here, but that’s about it. He wired a $100,000 allowance/optional claiming field in his last, but that won’t help him here with Early Voting in the field.

Fenwick wired a Maiden Special Weight field as a longshot two starts ago but came back to run eleventh in the Blue Grass Stakes, beaten 36 lengths after checking early. His early trouble in that race wasn’t as bad as some made it out to be, and he ended up getting a decent inside trip to the final turn before going straight backward. His backers think the early checking in the Blue Grass Stakes negated his free running style and made him run poorly. We’re not buying it, and he’s facing serious speed in the form of Early Voting today too.

We’ll combine our top four in the Preakness Exactor, Trifecta and Superfecta, bet Early Voting to win and place if he’s 7/2 or better, and takes some extra tickets with Epicenter and Early Voting on top of our top four in second combined with ALL in the third and fourth slots of the Trifectas and Superfectas. We’ll also box Epicenter and Early Voting in an additional Exacta. With the hyped-up filly Secret Oath expected to take a lot of action, the Exacta could pay decently.