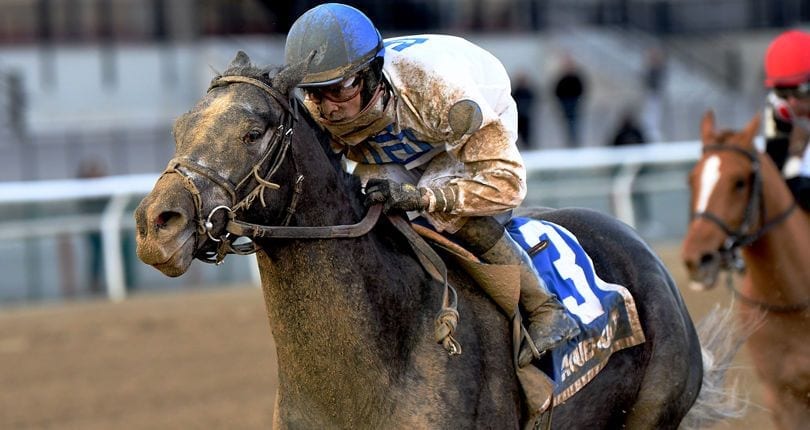 There are three major Kentucky Derby preps today, so we thought we’d get a little creative and try something different. How about a $50 win/place parlay on our three top picks, one in each race.

None of the horses we’re playing in these races will be big odds, which is why we’re doing a parlay and hoping for a decent return.

Bet on all three races at one of our recommended racebooks >>>

Chance It is the pick in the first of our three races, the Tampa Bay Derby. He was scratched out of the Fountain of Youth at Gulfstream when he drew a difficult outside post but drew much better for the Tampa race and looks like he horse to beat at very fair morning-line odds of 5/2.

The talented Paco Lopez will be aboard Chance It for the Tampa race, and trainer Saffie Joseph Jr. is winning at a 33% clip overall and a 37% clip with horses coming off a win, which Chance It is. In his first start as a 3-year-old on January 4, Chance It was a game head winner of the $100,000 Mucho Macho Man at Gulfstream Park, recording the top Beyer Speed Figure in the field of 99.

If Chance It can get the job done, or at least finish second, we’ll then be rolling our dough back onto Mischievous Alex in the Gotham Stakes at Aqueduct. Listed as the morning line favorite at 3-1, it’s unlikely he’ll go off at odds that high based on his last two races with blinkers on.

Trainer John Servis put the blinkers on Alex for his last start of 2019, the $75,000 PARX Juvenile, and he responded with a 9 ¾-length win. And just to prove the blinkers weren’t a fluke over an average field, Alex came back to romp in his first start as a 3-year-old on February 1 in the Swale Stakes-G3 at Gulfstream Park by seven lengths. If he repeats his last race, he should win again.

That brings us to one of our favorite horses, the game and gutsy Thousand Words in the San Felipe Stakes. Trained by Bob Baffert, Thousand Words showed just how tenacious he could be in a fight when he put away one horse and held off another to win the Los Alamitos Futurity-G2 in his final start of 2019, and came back three months later in his first start as a 3-year-old on February 9 to win the R B Lewis-G2 in the same fashion.

In the R B Lewis. Thousand Words showed off another high-quality character attribute when he sliced bravely between horses at the top of the Santa Anita stretch and again outdueled one rival before holding off another. He makes his second start off the layoff in the San Felipe and has to beat his talented stablemate Authentic.

If we can get all three of our picks to the winner’s circle, the parlay should provide us with a decent payoff.

And that’s what we’re here for, right!