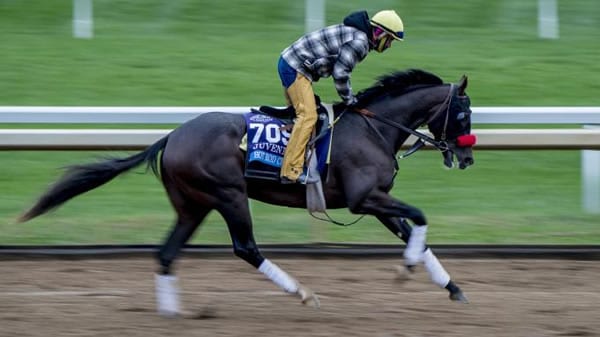 Based on everything 8/5 morning-line favorite Mandaloun has going for him in the 2021 Louisiana Derby, he looks like the horse to beat, but we’re not 100 percent convinced he’s the best horse in the race. That said, the only real weakness Mandaloun has are his low odds.

In his first start off a six-week layoff, Mandaloun gave his best but tired to finish third in the Lecomte Stakes-G3, going 1 1/16-miles while recording a career-best Beyer Speed Figure of 91. That set him up nicely for his next start in the Risen Star Stakes-G2 going 1 1/8-miles, and he parlayed a perfect trip behind a forced pace to rally outside and win that race by 1 ½-lengths over two of the rivals he faces today.

Mandaloun improved his Beyer Speed Figure again in the Risen Star to a 98, which tops this field by only a slim margin, but he looks like he should again get a perfect trip as he stretches out another sixteenth to 1 3/16-miles. His pedigree is solid for the distance, his trainer Brad Cox has strong trainer pattern numbers in all the relevant categories, and jockey Florent Geroux is winning with an amazing 27% of his mounts. And he’s ridden Mandaloun in all four of his lifetime starts with no mistakes.
In the Risen Star, Mandaloun defeated Proxy and Midnight Bourbon, both of whom are back for another shot at him here. A wire-to-wire winner of the Lecomte Stakes, Midnight Bourbon had a tougher go of it in the Risen Star, forcing the pace outside Rightandjust throughout and only shaking off his inside rival as the fresh Mandaloun was coming to challenge in early stretch. Midnight Bourbon faces Rightandjust again in here, and his speed will again be compromised. Risen Star runner-up Proxy can also force the pace if he feels like it, which makes a theft by any of these three unlikely.

Proxy got a nice inside trip stalking the pacesetters to the stretch in the Risen Star, then inexplicably shifted out five wide for the drive and barely got up in time to defeat Midnight Bourbon for the place, and that rival did all the hard work. Proxy finished second behind Midnight Bourbon in the Lecomte Stakes and has as good a shot as any of taking the runner-up spot here again at rather unenticing 7/2 morning-line odds.

Starrininmydreams was a perfect 2-for-2 as a 2-year-old but looked totally unprepared, making his first start off an 11-week layoff in the Risen Star. He was bearing out coming out of the first turn before getting a decent trip inside and then went straight backwards from midway through the final turn. Improvement is possible but not probable after finishing ninth beaten 27 ¼-lengths in the Risen Star.

Run Classic is thrown to the wolves here after making his second lifetime start a winning one at Fair Grounds in a Maiden Special Weight race going 1 1/16-miles. Does no one run horses in N1X and N2X allowance races after breaking their maiden anymore, allowing them to develop properly? Run Classic looked decent breaking his maiden and should get a nice trip in here, but he’d need to improve his Beyer Speed Figure by 15 points to win this. Again, not impossible but improbable.

Hot Rod Charlie is a very interesting shipper from California, coming into this race off a third-place finish beaten only a neck in the Robert B. Lewis Stakes-G3 at Santa Anita on January 30 going 1 1/16-miles. That was first start since finishing second beaten only three-quarters of a length in the Breeders’ Cup Juvenile-G1 on November 6. Hot Rod Charlie has a nice turn of foot, and we may not have seen the best of him yet.

He was game in both the Breeders’ Cup Juvenile and the Robert B. Lewis and may need only a nicely timed ride in here to upset the favorite. He definitely looks like he could have some upside, and at anywhere close to his morning line odds of 3-1, he’s worth taking a shot on with top jockey Joel Rosario in the saddle.

The last horse we’ll mention is O Besos. We took a bit of a shot on him at 21-1 in the Risen Star after two straight wins, and he finished fourth beaten 7 ½-lengths in his first stakes try. He gave his best in that race and will probably do so again here, but it looks like the best he could do would be third or fourth, and that’s only if he stalks an all-out duel.
The race sets up with Rightandjust taking the lead under pressure from Midnight Bourbon early, with Proxy and Mandaloun following those two. Run Classic and Hot Rod Charlie should be in the next flight, followed by O Besos and possibly Starrininmydreams, but we’re not sure where the latter will be after his last performance.

Mandaloun and Proxy should challenge the pacesetters on the turn, and Mandaloun should be able to shake off Proxy based on past performance, but we’re not so sure he’ll be able to do the same to Hot Rod Charlie. If Charlie can time his quick move just right, he might just surprise Mandaloun and surge to the front into the stretch, leaving Mandaloun with no shot of catching him late.
At 3-1 on the morning-line, Hot Rod Charlie is the play.
Rev your engines!