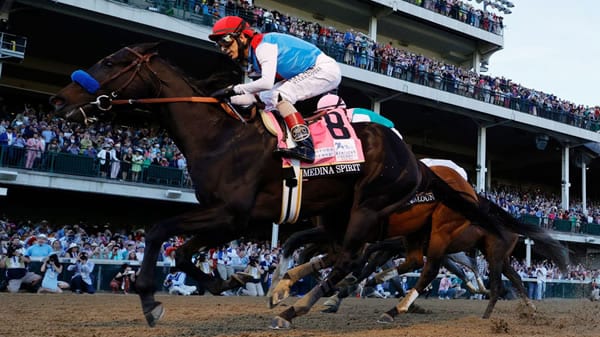 On paper, the top two horses in the 146th Preakness Stakes appear to be Bob Baffert-trainees and stablemates Medina Spirit and Concert Tour. Baffert has already won the Preakness seven times, and he’s holding a pair of Aces with speed on a track that favors exactly that.

Medina Spirit and Concert Tour aren’t nearly as effective when unable to secure the early lead, but the former probably has both a speed and class edge on this field, and the latter likely has no other option but to send from post 10.

When Concert Tour was able to take the lead inside under mild pressure in the Rebel Stakes-G2 two starts ago, he looked like a monster in the stretch and drew off to win by 4 1/4-lengths with lots left in the tank. When he was forced to rate and press on the outside in his next start in the Arkansas Derby-G1, he wasn’t the same horse and never could get by inside speed Caddo River, finally tiring to finish third. His best shot to win the Preakness would be on the front end, and if he clears to the lead, he might just do that. Otherwise, he presses outside Medina Spirit and tires in the stretch.

Medina Spirit looked dynamite in the Kentucky Derby-G1 when able to secure a relatively easy lead and rate, but he wasn’t the same horse when rating outside in the Santa Anita Derby-G1 and couldn’t catch Rock Your World in the stretch. Still, the Preakness doesn’t appear to be near as tough on paper as the Kentucky Derby, and if he manages to get the lead and the inside, he would be very tough to beat. Even without the lead, he might be able to press Concert Tour and win.

And what if the two Baffert horses both go to the lead, rate and slow the pace down to a crawl? They might just run away from the field in the stretch. That’s a possibility if the strategy is set properly by Baffert. Midnight Bourbon appears to be the only other speed horse in the Preakness field and if he goes after the Baffert horses early you have to think that one of them will take back slightly and beat him in the stretch.

Midnight Bourbon wasn’t able to use his natural speed in the Kentucky Derby after getting bumped at the break and being uncomfortable while back early and surrounded by horses, but he eventually got to the outside and rallied without threatening. With a cleaner trip, he has a chance, especially with the rider change to top jockey Irad Ortiz, Jr., but the more likely scenario is that at least one of the two Baffert horses runs away from him in the stretch, and maybe both.

If the three speed horses hook up, Chad Brown-trainee Crowded Trade could be the one to take advantage of them late. He was back early in the Wood Memorial-G2 and appeared to dislike having dirt kicked in his face before making a nice move to late stretch and flattening out to finish third beaten 1 1/4-lengths over a deep and tiring Aqueduct surface. He might like the Pimlico surface better, but also note that the two horses that beat him in the Wood Memorial, Bourbonic and Dynamic One, came back to run 13th and 18th in the Derby, respectively.

Wager on the Preakness Stakes online at the best racebooks >>>

Brown also saddles Risk Taking in the Preakness, but that horse ran poorly in the Wood Memorial as the favorite, finishing seventh beaten 6 3/4-lengths. The Wood might be a total throw-out race based on the surface that day, and either one of the Chad Brown horses could rebound with a better effort in the Preakness.

Ram has won two in a row for 6-time Preakness-winning trainer D. Wayne Lukas and appears to be moving in the right direction, but he had good trips in each of his last two races against lesser competition, and he was lugging in through the stretch in his last race. There’s a good chance Lukas will have that fixed for this race, but his numbers still appear to be too low. He’ll need to improve quite a bit to win this.

Keepmeinmind comes into the Preakness off a non-threatening seventh-place finish in the Kentucky Derby. He trailed the field to the final turn before passing horses, and to his credit, he at least showed some interest in his third start off the layoff, something he did not do in his two starts previous to the Derby. He looks like he would need a total pace meltdown to win and is probably best used in the lower rungs of the Preakness Superfecta.

Rombauer makes his third start off the layoff in the Preakness after a third-place finish behind 2-year-old champ Essential Quality in the Bluegrass Stakes-G2, and he did have to wait briefly on the backstretch in that race before rallying rather evenly behind the top two. A winner of the El Camino Real Derby in his first start back this year, he should rally late over a track that generally favors speed, which puts him up against it.

Unbridled Honor comes into the Preakness off a willing second-place finish in the Lexington Stakes-G3 after being last to the final turn, but while he is improving with every start, he will have to do so again to beat the top shooters in here while making a serious class hike for trainer Todd Pletcher, who is 0-for-9 in the Preakness.

Japanese shipper France Go de Ina is a total wildcard, and we have no idea how he will run. After two easy wins in Japan, he was last seen on March 27, finishing a dull sixth beaten 10 1/2-lengths in the UAE Derby-G2.

It’s difficult to know which Baffert horse will be sent to the lead in here, but if Concert Tour does clear to the lead, he has a reasonable chance to upset with a repeat of his Rebel Stakes win. Morning-line favorite Medina Spirit is the logical choice to win the Preakness, and he may also go off at decent odds based on the fact that Midnight Bourbon was favored in the early betting. If Medina Spirit is 5/2 or better, he’s the play. Otherwise, we’ll take a shot on Concert Tour to wire the field at 4-1 or higher. We’ll also take those two first and second, first and third, and second and third with ALL in our Preakness Superfectas and Trifectas and box them in an Exacta, with additional tickets including Crowded Trade.

All in on a pair of Aces? Why not!