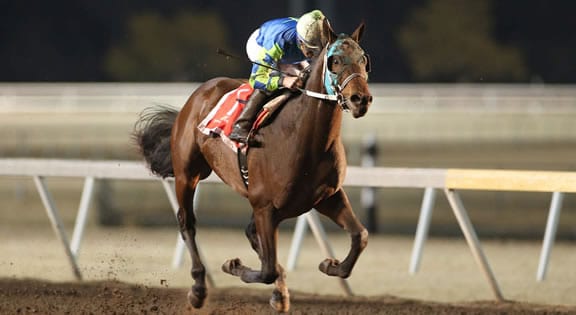 Road to the Kentucky Derby 2021

With the scratch of morning-line favorite Keepmeinmind, the 2021 Risen Star Stakes appears to be a rematch between the top three finishers in the Lecomte Stakes-G3, which was run at Fair Grounds on January 13, but is it?

Lecomte winner Midnight Bourbon (6-1) had things all his own way in the Lecomte and wired the field while coming off a three-month layoff. He has come from just off the pace in the past, and he will be either on the lead or pressing again in the Risen Star. For some reason, he just doesn’t impress us, and longshot speed Rightandjust (15-1) could throw a wrench into his front-end plans. Maybe he’ll make a big move forward here, perhaps not, but if there is a good horse in this race, they will beat him.
Fellow Risen Star entrants Proxy (8-1) and Mandaloun (9/2) finished a head apart in second and third in the Lecomte, a length behind Midnight Bourbon. Both rivals had a fitness edge on Midnight Bourbon in that race but couldn’t get by him in the drive. Proxy likes to go to the lead, but Midnight Bourbon got the jump on him out of the gate in the Lecomte, and he never could get by that one. He ended up pressing from the outside and challenged on the turn but was turned back in early stretch. He did respond gamely to outduel Mandaloun for the place, but that rival had a bit of a wide trip before finishing willingly and now gets blinkers on.

Starrininmydreams(12-1) was both green and game-breaking his maiden going 1 1/16-miles in November at Churchill Downs on a sloppy track, but he hasn’t run since then. Still, he’s certainly not out of it here if ready. Beep Beep (20-1) looked good breaking his maiden going seven furlongs at Churchill Downs in November and was bumped hard in his next start going a route on January 16 at Fair Grounds before ending up a wide fourth. He could improve with a better trip.

Carillo (15-1) made his first start a winning one going a mile at Aqueduct on January 8 after an educational trip in which he was pinched back to last at the start. He has top trainer Tom Amoss in his corner and is another in here who could improve. That’s just the way it is in these early 3-year-old races. The trick is to predict who will improve most.

BET THE RACES FOR FREE TODAY BY SCORING A 50% REAL CASH BONUS AT ONE OF THE WEB’S BEST RACEBOOKS —> BOVADA!

O Besos (12-1) has won his last two starts sprinting at Fair Grounds and has broken slowly and raced greenly in all three of his starts. He appears to have some talent, and despite winning two of three, he has yet to put it all together. The son of 2013 Kentucky Derby winner Orb now stretches out from six furlongs to 1 1/8-miles and might be a bit of an unnoticed sleeper in here.

Sermononthemount (50-1) comes into the Risen Star off a victory over N2X allowance foes at Delta Downs going seven furlongs, and although he did finish well to win that race, he now moves up in class with Beyer Speed Figures that are 20 points or more lower than the best in here. Hard to see him winning, but he could possibly be a longshot rallier for the bottom halves of the Superfecta.

Santa Cruiser (15-1) was bothered at the break in Lecomte and dropped well back before rallying to finish fourth. That was his first start since breaking his maiden at Churchill Downs in November, and he deserves another shot to show what he’s got. Another with a chance at the bottom slots of the Superfecta and may be higher if he improves.
Rightandjust (15-1) made it two in a row when wiring N1X allowance rivals at Fair Grounds going 1 1/16 miles on January 16, and he could be the horse that takes a round out of Bourbon Bay early. He will likely be sent hard from the widest post, and if he clears to the lead early and relaxes, he might have enough pedigree to go all the way. Longshot speed play, but he has to clear early.
And finally, we get to our pick, Senor Buscador (6-1). A perfect 2-for-2, he won the $200,000 Springboard Mile at Remington Park in his last start on December 18 and earned the highest last-race Beyer Speed Figure in this field, a 93. He broke slow and dropped well back early in that race, and until midway, through the turn for home, it looked like he had absolutely no chance of winning, but he simply outclassed his rivals and ran away to win by 5 3/4-lengths.
Senor Buscador moves up in class here, and he must avoid daydreaming to win this, but with any kind of trip he is the horse to beat.

A good day for longshots? We hope so!