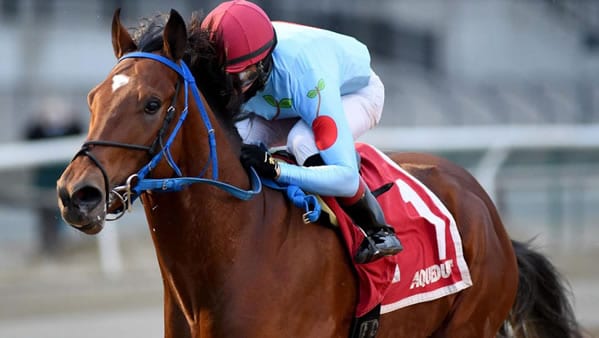 The 2021 Withers Stakes-G3 looks like a good matchup between the two morning-line favorites, Capo Kane (3-1) and Risk Taking (5/2).

Risk Taking got blinkers on for his third lifetime start at Aqueduct going 1 1/8-miles, and made a couple of moves in that race while also having to wait mildly into the turn. He lost ground moving outside into the stretch but powered home and drew away late. Conditioned by top trainer Chad Brown, he’s already proven at the distance, and if he gets any kind of pace to run at, they’ll have to beat him in the stretch.

Capo Kane has won two in a row on the front end, including the one-mile Jerome Stakes in the mud at Aqueduct in his last start. He’s only started three times but based on his second-place finish after an educational trip between horses behind the leader in his first-lifetime start, and he doesn’t need the lead to win. Whether he comes from just off the pace in here or sets it under pressure, this will be a tougher race, but he appears to have enough talent to win.

Million-dollar purchase Overtook (6-1) could be the sleeper. He broke through to win his third lifetime start going a mile at Aqueduct for trainer Todd Pletcher but still looked like he had no clue what he was supposed to be doing. He dropped well back early and came grinding home late to win by two lengths. He got a low Beyer Speed Figure for that race, but he looks like he’s slowly moving in the right direction, and he should handle the distance. If he can get some pace to run at, he might just come rolling home late. Use in your exactas.

Pletcher’s second entrant in the Withers is Donegal Bay (7/2), who wired the field in his second lifetime start going a mile at Gulfstream Park off a four-month layoff. He got a competitive Beyer Speed Figure in that race, and he should move forward, but he is another that will have to deal with more pace today, and he also looks like he is still learning.

The last horse we’ll mention in the Withers is Eagle Orb (10-1), who finished second in the Jerome in his previous start, six lengths behind fellow Withers entrant Capo Kane. Two starts back, he won the restricted Notebook Stakes going six furlongs at Aqueduct. Eagle Orb desperately wants to be a good horse, but his numbers are lower than the best in here. Still, he has a good trainer in Rudy Rodriguez, and if given the opportunity with a perfect trip, he looks like a tryer who could beat you.

Get a rebate with every race bet at this online racebook.!

The 2021 San Vicente will run with only five horses, but they’re a talented, closely matched bunch. Trainer Bob Baffert has two entrants in the race, including morning-line favorite Concert Tour (8/5), who owns the top Beyer Speed Figure of 88. Concert Tour broke his maiden in his first-lifetime start at Santa Anita three weeks ago, going six furlongs, and he couldn’t have been any more impressive, winning with something left. The horse to beat.

Baffert’s second entrant, Freedom Fighter (5/2), just held on after setting all the pace in his only lifetime start at Del Mar going five furlongs, but that was six months ago. He drew the rail and will likely show speed, but the long layoff and tougher competition will probably work against him.

The Chosen Vron (5/2) looked dynamite after being pressured to the stretch and powering away to break his maiden against state-bred rivals at Santa Anita, going 6.5-furlongs at the end of December. He faces other speed here, and he has to go another half-furlong, but his Beyer Speed Figure came back as a solid 86, and he was certainly enthusiastic in victory. He looks like he loves what he’s doing.

Uncle Boogie (12-1) broke a step slow and was steadied a few times, dropped back to last, and then made a nice move on the turn to win a $50,000 Optional Claiming race on January 17, going 6.5-furlongs at Santa Anita. The only two-time winner in the field, he finished second in the Bob Hope-G3 at Del Mar three starts ago, but his Beyer Speed Figures are lower than the best in here. He’d need an all-out duel to win, but anything can and often does happen in these short fields.

Found My Ball (3-1) made his 3-year-old debut a winning one against state-bred competition going six furlongs at Santa Anita on January 21. He stalked a duel from the outside and ran away from his field to win with something left in the tank, recording a solid Beyer Speed Figure in the process.

This race might depend more on trips than talent, but we’ll have to give the edge to the favorite, Concert Tour, who should be able to press and pounce. He’ll have to improve off his debut, however, as both The Chose Vron and Found My Ball should also be better. And if they all end up in a duel, Uncle Boogie could win.

If the favorite is bet down to below even money, you can either pass the race or take a flyer on the best overlay based on the morning line.