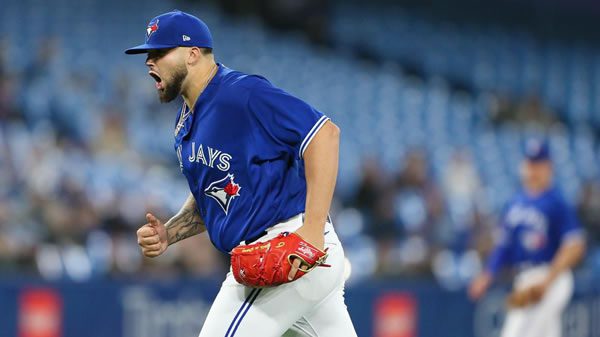 The Toronto Blue Jays host the Los Angeles Angels on Saturday August 27th at Rogers Centre. The first pitch in this matchup is scheduled for 03:07 ET. The MLB Odds Board places Toronto as the favorite (-155), with an OU line set at 7.5.

The Angels are hoping to pick up another win, as they took down the Blue Jays by a score of 12-0. In the win, Los Angeles’s pitching staff gave up only 0 runs on 6 hits. This win came as Los Angeles was the betting underdog, getting 160.0 on the moneyline. This game went over the posted over-under line of 9.0 runs. Even with this game going over the total, Los Angeles still has an over-under record of just 53-62-10.

The Angels will be hoping to pick up a win in today’s matchup, as they have gone just 1-4 over their last 5 games. This mark has come on an average run margin of just -5. In their last 5 contests, Los Angeles is averaging 4.0 runs per game, right in line with their season average of 3.74. Los Angeles’s overall series record is just 14-21-4.

The Blue Jays are coming off a 12-0 loss to the Angels. In the game, the team’s pitching staff allowed a total of 13 hits, leading to 12 runs. Offensively, they finished with 0 runs on 6 hits. Heading into action, Toronto was the favorite at -180.0. So far, the team has won 56.9% of the games in which they were favored. In terms of the over-under, the Blue Jays and Angels combined to surpass the line of 9.0 runs. For the season, the team’s over-under record is 63-59-1.

Across their last 5 contests, the Blue Jays are above .500, going 3-2. Toronto has managed to play above .500 baseball, despite their last 5-scoring margin sitting at -6. Toronto is still playing winning baseball, even with their offense averaging just 4.0 runs per game, compared to a season long mark of 4.73. On the season, Toronto has won more than half of their series, going 19-14-6.

Los Angeles will roll with Shohei Ohtani (10-8) as their starter. To date, Ohtani has an ERA of 3.55 while lasting an average of 0.79 innings per appearance. Through 122 outings, opposing teams have combined for a batting average of 0.221. Home runs have been a concern for Ohtani as he is allowing 1.31 per 9 innings. In terms of strikeouts, Shohei Ohtani has a strong strikeout percentage of 34.0%, including a per game average of 1.37. For the season, he has struggled with command averaging 2.99 walks per outing.

In today’s game, Toronto turns to starter Alek Manoah. For the year, he has a record of 12-6. Through 24 appearances, Manoah has an ERA of just 2.66 while averaging 6.17 innings per appearance. Overall, opponents have a batting average of just 0.214 against the right-hander. Per 9 innings pitched, Manoah is giving up 0.85 home runs. Overall, Alek Manoah has struck out 23.0% of the batters he has faced. On average, he averages 5.79 K’s per game. For the season, he has struggled with command averaging 2.24 walks per outing.

For the season, the Los Angeles Angels and Toronto Blue Jays will be playing their 5th game of the season. Toronto holds the edge in the series at 4-0. Through 4 games, the series’ over-under record is 3-1, with the average run total sitting at 10.0 runs per game. The averge scoring margin in these meetings is 1.5 runs. Going back to last year, Los Angeles won the season series, 4 games to 3. The over-under record in last year’s matchups was 5-2, with the average run total being 10.0 runs per game. The average scoring differential in this series was 5.71 runs per game.

More Picks: Get our LA Dodgers vs. Miami Marlins recommended bet for 8/27/22

Heading into Saturday’s matchup between Los Angeles and Toronto, the Blue Jays are the favorite to pick up a win. Even though Shohei Ohtani has a strong ERA and WHIP, the Angels have lost 5 out of his 6 past starts. On the other side, Alek Manoah has been up and down of late but should benefit from a light-hitting Angels lineup. I like Toronto on the moneyline.

Free MLB Pick: Blue Jays Moneyline. Wager on baseball for FREE this weekend by taking advantage of a massive 100% real cash bonus up to $300 when you use bonus promo code PREDICT100 at MyBookie Sportsbook! Be sure to check out their huge NFL Handicapping Contest and their Survivor Contest as well!