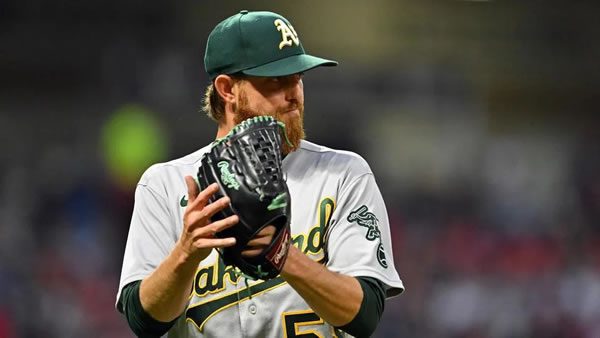 The Boston Red Sox host the Oakland Athletics on Thursday, June 16th at Fenway Park. The first pitch in this matchup is scheduled for 01:35 ET. The MLB Odds Board places Boston as the favorite (-142), with an OU line set at 9.0.

The Athletics will look to bounce back from a tough loss to the Red Sox by the score of 10-1. Oakland’s pitching staff finished the game by allowing 13 hits, leading to 10 runs. Offensively, they finished with just 1 run on 7 hits. The loss came as Oakland was the betting underdog, getting 156.0 on the moneyline. With the over-under line set at 9.5 runs, the Athletics and Red Sox combined to go over this total. On the season, Oakland’s over-under record is 28-30-6.

The Athletics will be hoping to pick up a win in today’s matchup, as they have gone just 1-4 over their last 5 games. This mark has come on an average run margin of just -13. During this stretch, the offense is averaging 3.4 runs per game, similar to their season-long average of 3.25. Oakland’s overall series record is just 4-15-1.

The Boston Red Sox are coming off a big win over the Athletics by a score of 10-1. In the win, the pitching staff allowed just 1 run on 7 hits. In the victory, the Red Sox came up with 13 hits and 10 runs. In the game, Boston was able to take care of business as they were the favorite at -190.0. For the season, the team has been favored in 38 games, winning at a rate of 61.0%. In terms of the over-under, the Red Sox and Athletics combined to surpass the line of 9.5 runs. On the season, the team has an over-under record of just 25-33-5.

Across their last 5 contests, the Red Sox are above .500, going 4-1. During this time, the team’s run differential sits at +16. Boston has benefited from strong pitching, as their offense has slipped in their last 5 games, averaging just 5.6 runs per game. Their overall average sits at 4.76. On the season, Boston has won more than half of their series, going 9-8-3.

Oakland will roll with Paul Blackburn (5-2) as their starter. Currently, Blackburn has an ERA of just 2.31 while pitching an average of 5.51 innings per outing. So far, batters are hitting just 0.214 against him. Home runs have not been an issue for Blackburn, as he is giving up just 0.41 HR/9. Overall, he is averaging 3.92 per game, on a K rate of 18.0%. Leading into the game, he has shown a strong command of his pitches, averaging just 2.04 walks per contest.

Rich Hill gets the start for the Red Sox, with an overall record of 2-3. Hill gets the start with an ERA of 4.38. On average, he has lasted 4.46 innings per appearance. Opposing teams have hit the ball well against the left-hander, with a batting average of 0.246. Home runs have been an issue for Hill, as he is allowing an average of 1.28 per 9 innings pitched. Hill is in the bottom half of the league in strikeouts, averaging just 3.64 K’s per game. This includes a strikeout percentage of 20.0%. Throughout the season, Hill has avoided walking batters, allowing just 2.37 per contest.

For the season, the Oakland Athletics and Boston Red Sox will be playing their 6th game of the season. Currently, Boston is winning the season series 5-0. The over-under record in this series sits at 3-1. The average run total in these games is 6.33 runs per game. In these matchups, the average scoring differential sits at 6.0 runs. When looking back to last season, Oakland and Boston split the season series, with each team picking up 3. The over-under record in last year’s matchups was 1-4, with the average run total being 6.33 runs per game. On average, the winning team won by a margin of 2.33 runs per contest.

Heading into Thursday’s American League matchup between Oakland and Boston, the Red Sox have dominated the season series. The A’s will be looking for another quality start from Paul Blackburn, but have lost 3 straight games with him on the mound. I recommend rolling with Red Sox to pick up the win and cover the runline.