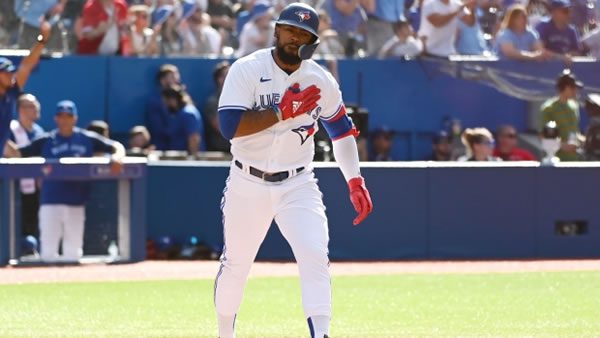 The New York Yankees host the Toronto Blue Jays on Thursday August 18th at Yankee Stadium. The first pitch in this matchup is scheduled for 07:05 ET. The MLB Odds Board places New York as the favorite (-140), with an OU line set at 8.0.

In Toronto’s last game vs the Orioles, the Blue Jays came away with a 6-1 win. Overall, the team’s pitching staff limited the Orioles to 1 run on 4 hits. The Blue Jays lineup had a good night at the plate, coming up with 8 hits, leading to 6 runs. In the matchup, Toronto was favored at -170.0 on the moneyline. So far, the team has been the favorite in 97 of their games, winning at a rate of 56%. This matchup remained below the over-under line set at 8.5 runs. However, for the season, Toronto still has an overall over-under record of 60-55-1.

In their last 5 games, the Blue Jays are below .500, at 2-3. In this rough stretch of games, the team’s run differential comes in at -5. Toronto’s offense is in the middle of a cold streak, as their offensive production has dipped to just 3.0 runs per game over their last 5 contests. So far, Toronto has won over half of their 37 series played, going 17-14-6.

The Yankees are coming off a tight 8-7 win over the Rays. New York’s pitching staff gave up 9 hits, leading to 7 Rays runs. In the victory, the Yankees came up with 10 hits and 8 runs. Heading into action, New York was the favorite at -135.0. For the season, the team has been favored in 109 games, winning at a rate of 63.0%. In terms of the over-under, the Yankees and Rays combined to surpass the line of 8.5 runs. This outcome moves the team’s over-under record back to .500 at 57-57-4.

In their last 5 contests, the Yankees have just 2 wins, going 2-3. During this time, the team has a run differential of -7. The team’s offense is partly to blame for their recent slump, as they have averaged just 2.4 runs over their last 5 game. On the season, New York has won more than half of their series, going 23-11-5.

The Toronto Blue Jays will be looking for a quality outing from right-hander Jose Berrios. On the season, Berrios has a record of 8-5 on an ERA of 5.61. So far, he has racked up 108 strikeouts compared to 31 walks. In his last outing, Berrios was tagged for 8 runs in just 4 innings of action. He has now not gone past the 4th inning in 2 straight starts.

New York will roll with Frankie Montas (4-9) as their starter. Currently, Montas has a strong ERA of just 3.1 while pitching an average of 5.48 innings per outing. Overall, opponents have a batting average of just 0.225 against the right-hander. Montas is giving up home runs at a rate similar to the league average, allowing 1.04 per 9 innings. On the season, Frankie Montas has had no problem racking up strikeouts, posting a strikeout percentage of 26.0%. This has led to an average of 5.79 K’s per game. Command has been a problem for Montas, as he is giving up 2.41 walks per outing.

Today’s matchup between the Toronto Blue Jays and New York Yankees will be their 13th meeting of the season. New York holds the edge in the series at 8-4. The over-under record in this series sits at 6-6. The average run total in these games is 7.74 runs per game. The averge scoring margin in these meetings is 3.25 runs. Last season, Toronto picked up the series win, 11 games to 8. In these 19 meetings, the two teams combined for an over-under record of 6-12. Last year, the Blue Jays and Yankees averaged 7.74 runs per game. On average, the winning team won by a margin of 2.79 runs per contest.

Heading into Thursday’s AL East matchup between Toronto and New York, the Yankees have an opportunity to bust out of their recent slump against Jose Berrios. The Blue Jays right-hander has looked awful of late. New York’s offense looked good in their last game vs the Rays and could have another big game today. I like New York on the moneyline.