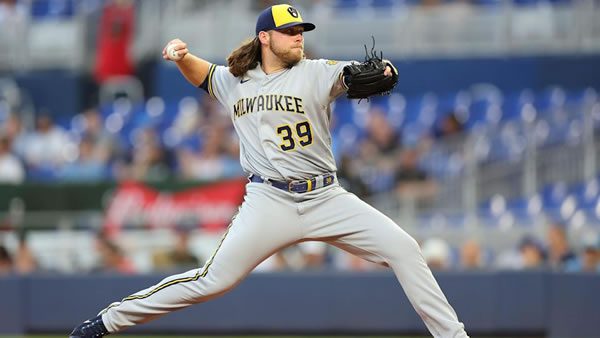 Money Line: Dodgers -115 / Brewers -105 (GTBets - We’ve lined up a SPECIAL 125% real cash bonus for our readers! This offer is good for up to $400 in free bets when you use bonus promo code PREDICTEM after making your first deposit! Enjoy!)

The Milwaukee Brewers host the Los Angeles Dodgers on Thursday August 18th at American Family Field. The first pitch in this matchup is scheduled for 02:10 ET. The MLB Odds Board places Los Angeles as the favorite (-115), with an OU line set at 8.0.

In the Los Angeles Dodgers’ last game, they picked up a 2-1 win over the Brewers. On their way to the victory, the pitching staff gave up 1 run on 4 hits. On offense, Los Angeles’s lineup put together a total of 6 hits, leading to 2 runs. Heading into their last game, Los Angeles was the betting favorite at -165.0. Through 114 games as the favorite, the team has found the win column at a rate of 70.0%. This matchup remained below the over-under line set at 8.0 runs. This outcome pushed Los Angeles’s over-under record further below .500 at 47-59-10.

The Dodgers come into this game with a 3-2 record over their last 5 contests. During this time, they have an average scoring differential of +10. Los Angeles has put together this record, despite averaging just 4.6 runs per game, compared to their season average of 5.34. So far, Los Angeles has won over half of their 37 series played, going 27-9-1.

In their last game, the Brewers suffered a 1 run loss to the Dodgers by a score of 2-1. Even in the loss, the pitching staff allowed 2 runs on 6 hits. The Brewers’ offense ended the game with just 1 run on 4 hits. This loss came as no surprise, as Milwaukee came into the game as the underdog, getting 140.0. So far, the team has gone into 21 games as the underdog, still finding the win column at a rate of 33.0%. With this result, the Brewers and Dodgers combined to fall below the over-under line of 8.0 runs. Milwaukee still has an above .500 over-under record at (57-52-7).

Los Angeles will roll with Andrew Heaney (1-0) as their starter. Currently, Heaney has an ERA of just 1.16 while pitching an average of 4.43 innings per outing. Hits have been hard to come by against the left-hander, as his batting average allowed is just 0.183. In addition, to his strong BA allowed, he has been able to limit power, allowing just 0.29 home runs allowed per 9 innings. Up to this point, Heaney has a strikeout percentage of just 32.0% and a per game average of 6.0. Leading into the game, he has shown a strong command of his pitches, averaging just 2.9 walks per contest.

In today’s game, Milwaukee turns to starter Corbin Burnes. For the year, he has a record of 8-5. In his previous outings, Burnes has lasted an average of 6.22 innings, putting together an ERA of just 2.39. So far, batters are hitting just 0.182 against him. Burnes is giving up home runs a rate similar to the league average, allowing 1.01 per 9 innings. On the season, Corbin Burnes has had no problem racking up strikeouts, posting a strikeout percentage of 32.0%. This has led to an average of 7.87 K’s per game.

For the season, the Los Angeles Dodgers and Milwaukee Brewers will be playing their 4th game of the season. Los Angeles has the lead in the series at 2-1. Through 3 games, the series over-under record is 1-2, with the average run total sitting at 10.86 runs per game. The averge scoring margin in these meetings is 2.0 runs. Going back to last year, Los Angeles won the season series, 4 games to 3. In these 7 meetings, the two teams combined for an over-under record of 5-2. Last year, the Dodgers and Brewers averaged 10.86 runs per game. The average scoring differential in this series was 4.29 runs per game.

Heading into today’s National League showdown between Los Angeles and Milwaukee, the Dodgers are the slight favorite on the moneyline. Look for this to be yet another low-scoring, tightly contested game, as both Andrew Heaney and Corbin Burnes can be electric on the mound. However, I recommend taking the Dodgers to come away with the win, as Milwaukee hasn’t shown much life at the plate of late.