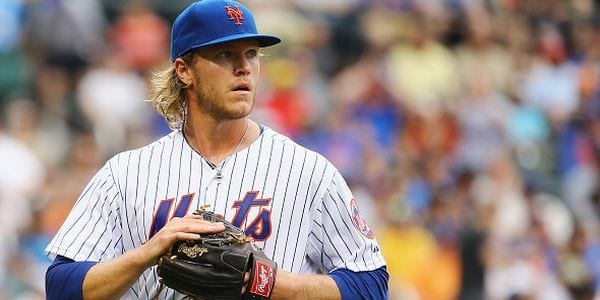 OK, it helps when you get to play a combined ten games against the likes of the Pirates, Marlins, and Padres, but the Mets can only play the teams on their schedule, and it’s not like the Nationals fared any better than the Padres did when they came to Queens. In the second half of the season, New York is a mind-bending 13-2 when it gets to play in front of its home fans, and its work at Citi Field is a big reason that the Mets have bounced back and gotten themselves right back into the wild card race.

Noah Syndergaard has played a hand in keeping Citi Field a fortress, as six of his past seven starts in Queens have resulted in a Met victory. His only loss was a 7-2 setback to San Diego on July 24, which is also the last time he gave up more than seven hits in a start.

It’s never easy to predict how things are going to go when a new pitcher steps onto the mound for the first time of the season. When a player switches leagues, it’s nearly impossible to predict how he’s going to react to facing new teams and new batters. The same is also true for a rookie (Aaron Civale) making his first pass through the league.

There’s no other way to say this: Brad Hand is struggling. Cleveland’s closer has mostly been lights out this season, but he has now blown three consecutive save opportunities after he gave away Wednesday’s game because he failed to cover first base on a potential double-play ball that would have ended the game with a 3-2 Cleveland victory. Instead, he gave up two earned runs for the third time in his past four appearances and has now blown more saves in the past two weeks than he had all season long.

His struggles are a major concern moving forward for Cleveland as it gears up for the stretch run. The Indians have built their team around their pitching, and the bullpen has usually been a strength for Cleveland in the postseason. If it’s not, everything could fall apart on the Indians.

The teams don’t face each other very often, but when they have, the Mets have tended to have the upper hand, especially when the teams play in Queens. Over the past five meetings in New York, four have gone to the Mets.

The mercury will be high for this matchup, with the temperature projected to reach 90 degrees.

Cleveland’s bullpen has pitched pretty well this season, but they’re struggling now with no real sign as to why. Meanwhile, the Mets look like they’re just going to keep playing top-quality baseball and have become more skilled at hanging onto their leads and fighting back when they’re trailing. The Mets are also playing at home, and that’s become a considerable edge for them right now going 13-1 over their last 14. I can’t see the Indians holding onto a lead after the way they lost yesterday’s game, and there’s a genuine chance that game could turn into two results at once.

If that scenario does come to pass, I have to take the Mets. I think it’s wise to do that anyway because they’ve played so well for the past month and seem to be on track to steal a playoff bid. Cleveland is in better shape as far as the postseason goes, so I’ll take the more desperate Mets in this one.