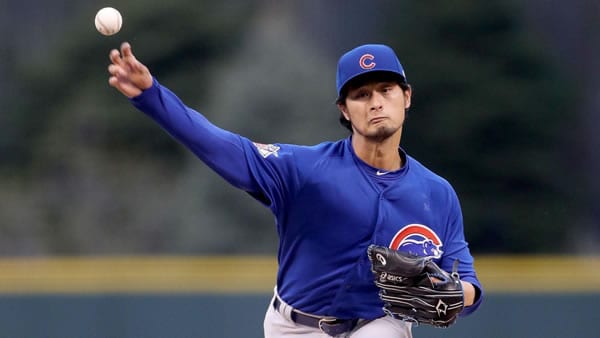 After taking the opener of this wild-card series Wednesday, the Marlins shoot to advance to the divisional round when these teams meet for Game 2 Friday afternoon at Wrigley Field. Miami began this series as a +160 underdog to win it, while Chicago was listed as a -200 favorite. Can the Marlins beat the Cubs again on their home turf? Can Chicago stay alive? And how are we playing this game with our free MLB pick?

Friday’s MLB playoff betting odds opened Chicago and Darvish at around -205 over Miami and Sanchez while holding off on posting an over/under, as they so often so on games played at the Friendly Confines. Early betting action then dipped the Cubs to -200.

Chicago could also be found getting around +110, giving the run and a half on the MLB run line.

Miami leads this best-of-three series one game to none, after taking Game 1 Wednesday 5-1. Thursday’s Game 2 was then postponed due to inclement weather.

Chicago led Wednesday’s game 1-0 through six innings, but the Marlins put up a five-spot in the top of the seventh, getting a three-run homer from Corey Dickerson and a two-run pop from Jesus Aguilar, and hung on from there for the victory and the cash as +150 underdogs on the MLB playoff betting line.

These teams did not meet during the regular season this year. Last year the Cubs took the season series from Miami six games to one.

Get dimelines plus reduced juice on totals and runline bets at BAS!

Darvish is a very sharp 10/12 on quality starts this season Last Friday, he tossed seven innings of shutout ball, allowing just three hits and one walk, striking out five, in a 10-0 Cubs win over the White Sox. However, over his three starts previous to that, he gave up nine runs and 20 hits through 19 innings, although he also struck out 25 over that span.

The Cubs are 9-3 with Darvish this season, but only 2-2 over his last four starts. Also, of Chicago’s nine wins with Darvish, this year, seven came by at least two runs.

In two starts against Miami last year, Darvish allowed three runs and five hits through 9 2/3 innings, with 15 whiffs and ten walks. But the Cubs won both those games.

Rookie righty Sanchez is 4/7 on quality starts this year but 0 for his last two. Nine days ago, he gave up four runs on four hits and four walks through just three innings of a 9-4 Marlins loss to Atlanta. Before that, he gave up five runs and eight hits through four frames of a 5-0 loss to Washington.

On the season, Miami is 3-4 with Sanchez, but 0-2 over his last two starts. Perhaps the week of rest will help.

This will be Sanchez’ first-ever start against the Cubs.

Miami batted .235 against right-handed pitching this season, with a .318 team OBP and a .355 team slugging percentage. This lineup could be without Starling Marte (six HR, 27 RBI, 10 SB this season) after getting hit on the finger by a pitch Wednesday.

The Marlins bullpen posted a 4.86 ERA this season and a 1.45 WHIP, along with a 2.00 K/BB ratio. Numbers like those “helped” this unit rank among the bottom half-dozen bullpens in Baseball. However, three Miami relievers combined to throw 2 1/3 innings of scoreless ball in the opener of this series.

We gotta give Darvish the check-mark in the pitching match-up, and Chicago also owns edges in the splits with the sticks and in the bullpen comparison. But that price seems a bit steep. So we’ll take a chance and chase the better price by playing the Cubs against the run line.