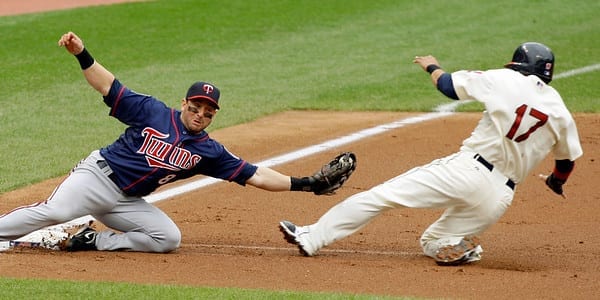 The pleasantly surprising Minnesota Twins, leaders of the AL Central here in the early going, ride a 7-3 run into the opener of a four-game weekend series with the Mariners in Seattle Thursday night. Which way are we going for our free MLB pick?

Thursday’s MLB betting odds opened Seattle and Swanson at around -110 over Minnesota and Pineda, with an over/under of nine runs. Early betting action then flipped the Twins into -115 favorites, and bumped that total to 9.5.

Minnesota could also be found getting upwards of +130 at sportsbooks like MyBookie, giving the run and a half on the MLB run line.

At 27-15 overall the Twinkies lead the AL Central by 4.5 games over second-place Cleveland.

Seattle, meanwhile, just swept a two-game series at home from Oakland, winning Tuesday’s series finale 4-3. The Mariners then had Wednesday off.

So after a great start to this season 22-23 Seattle now sits in second place in the AL West, 7.5 games behind first-place Houston.

This series is the first meeting between these two teams this season. Last year the Mariners took the season series from the Twins five games to one.

Rookie righty Swanson is 2/5 on quality starts this season, playing Jekyll-and-Hyde as of late. Three starts ago he gave up nine runs – six earned – and 11 hits through four innings against Texas; then he threw six innings of one-hit, shutout ball against Cleveland; but last Friday he got bombed by Boston for seven runs through just 4 2/3 innings of a 14-1 Seattle defeat.

On the season the Mariners are just 1-4 with Swanson.

This will be Swanson’s first-ever start against Minnesota, which could give him an edge, at least for the first couple of times through the lineup.

Former Mariner Pineda, by our stringent standards, is 0/8 on quality starts this season. Last Saturday he gave up three runs on three solo homers through six innings of a 5-3 Twins loss to Detroit. And over his last five starts he’s allowed 21 ER and 36 hits through 25 innings.

Minnesota is 3-5 with Pineda this season.

This will be Pineda’s first start against Seattle since 2016, when he was a Yankee, and that’s already a long time ago when it comes to this Mariners lineup.

Minnesota is batting .259/.327/.495 against right-handed pitching this season. This lineup has also scored at least six runs in five of its last 10 games.

Seattle is batting .244/.320/.470 against RH pitching this season. But this lineup has also scored a total of 19 runs over its last six games.

Pineda is struggling this season and yet he still gets the check-mark in this pitching match-up. Meanwhile, Minnesota also owns edges with the sticks and in the bullpen comparison. We’re taking the Twins for our free MLB pick for Thursday.