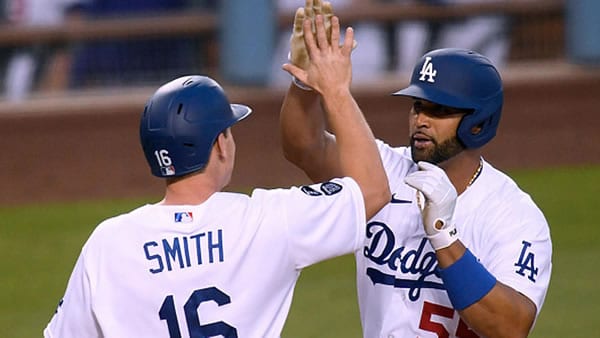 It doesn’t matter how much evidence the books get that Clayton Kershaw is now merely a good-to-great pitcher instead of an elite pitcher: they’re going to keep pricing him as if he’s Jacob deGrom. In the public’s mind, Kershaw is still the pitcher who won the Cy Young in 2011, 2013, and 2014, so the books are going to keep pricing him where the public thinks it should bet him.
However, not only is Kershaw now prone to the occasional less-than-great start, but the Dodgers’ bats aren’t exactly going to sit there and allow themselves to get shut out. Last month against the Angels, Kershaw pitched very well, holding the Angels scoreless through five innings. Los Anaheim then scored 11 runs off the Dodgers’ bullpen, turning a 13-0 laugher into a 14-11 win that the Dodgers actually had to work to earn. For the year, the Dodgers have played to the over in 12 of Kershaw’s 16 starts, including 11 of the pitcher’s past 12 trips to the mound. The books have stubbornly kept Kershaw priced at eight runs or less for the total throughout all of that.

For this game, however, the books might actually have a point. Zack Wheeler isn’t an elite starter in anyone’s mind, but he’s been pretty darn impressive since he made the move down I-95 from the Mets to the Phillies. His 2.92 ERA in 2020 could have been written off because of COVID and a short sample size, but he’s now pitched in a greater sample size in 2021 and been even better, shaving a full run off the best ERA that he ever achieved while in New York.
Part of the reason that Wheeler is doing so well is that he’s a strikeout pitcher in a time when hitters don’t really mind striking out. In his past five starts, Wheeler’s lowest strikeout total was eight. In his most recent start against Atlanta, Wheeler finished with 12 K’s out of 24 outs recorded.
The Dodgers are in the middle of the pack as far as striking out, which could lead to the under finally cashing in a Kershaw start if the Phillies’ hurler can continue to miss bats the way he has as of late. The under cashing wouldn’t be new for Wheeler: it’s hit in his past two starts and has gone 6-4 over his past 10, including three of his past four away from Citizens Bank Park.

I thought my cat was a lousy traveler until I got a good look at the 2021 Phillies. At first glance, the Phillies’ road record doesn’t look that horrible, as it’s only the fourth-worst in the National League. But then you take a look at the other three teams who are worse: Pittsburgh, Colorado, and Arizona, who are far and away the three worst teams in the National League. Only Colorado has a greater disparity between its home and road records than Philadelphia, which is staying in the NL East race almost entirely on the backs of its good home record and the incompetence of everyone but the Mets.
By contrast, the Dodgers don’t really care where they play as long as it isn’t in Denver. Los Angeles gets the job done whether it’s home or away, as the Dodgers are one of three NL teams with a winning record both home and away (San Francisco and Milwaukee are the others) and boast the fourth-best home record in the league.

It’s going to be very pleasant in Southern California, with temperatures of 77 degrees and a wind blowing seven miles per hour to the south, sending balls toward left center.

I don’t want to touch the total because Wheeler could easily keep the Dodgers’ score low just as well as Kershaw does with the Phillies. But I do feel comfortable backing the Dodgers here simply because Philadelphia is so poor away from home. The Phillies have already lost twice to the Dodgers on this trip, and there’s little to suggest that they can turn it around.
This month has the potential to be a disaster for the Phils because they follow with three in San Francisco and spend next weekend in Queens. But it doesn’t seem like there’s much of anything that they can do about it against a juggernaut. Give me the Dodgers here. Bet your MLB picks FREE today by taking advantage of a 100% REAL CASH bonus on your first deposit of $100 to $300 at MyBookie Sportsbook! (Must use bonus code PREDICT100 in order to receive the extra bonus cash!)