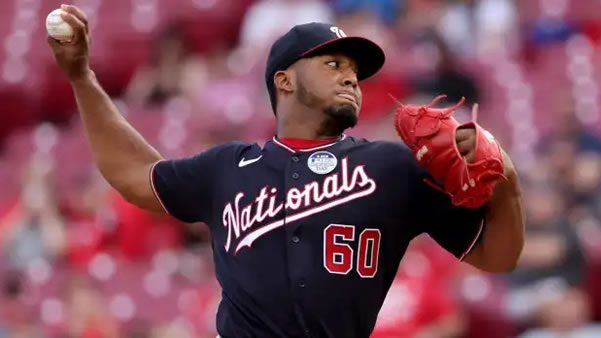 Money Line: Phillies -230 / Nationals +190 (BetOnline - One of the biggest and BEST Sportsbooks!)

The Washington Nationals host the Philadelphia Phillies on Friday, June 17th at Nationals Park. The first pitch in this matchup is scheduled for 01:05 ET. The MLB Odds Board places Philadelphia as the favorite (-230), with an OU line set at 10.5.

The Philadelphia Phillies will look to pick up another big win after they defeated the Nationals by a score of 10-1. Overall, the team’s pitching staff limited the Nationals to 1 run on 5 hits. The Phillies benefited from an offense that generated 10 runs on 11 hits. In the matchup, Philadelphia was favored at -210.0 on the moneyline. Through 43 games as the favorite, the team has found the win column at a rate of 56%. With the over-under line set at 9.5 runs, the Phillies and Nationals combined to go over this total. So far, Philadelphia has an above .500 over-under record of 37-25-2.

In the Phillies’ last 5 games, they are above .500, going 3-2. Even with this record, in these games, their scoring differential is just -2. Overall, Philadelphia is averaging 4.91 runs per game. Over their last 5 contests, they have been producing at a similar rate, at 4.91. Philadelphia’s overall series record is just 9-11-1.

Washington will look to move on from a 9 runs loss to the Phillies, falling by the score of 10-1. In the game, the team’s pitching staff allowed a total of 11 hits, leading to 10 runs. The Nationals’ offense ended the game with just 1 run on 5 hits. This loss came as no surprise, as Washington came into the game as the underdog, getting 170.0. In their 56 games as the underdog, their straight-up win percentage sits at 32.0%. In terms of the over-under, the Nationals and Phillies combined to surpass the line of 9.5 runs. For the season, the team’s over-under record is 35-28-3.

The Nationals come into today’s game looking to turn things around, as they are just 0-5 over their last 5 games. During this time, the team has a run differential of -28. The team’s offense is partly to blame for their recent slump, as they have averaged just 2.6 runs over their last 5 game. Washington has a below .500 series record of just 5-15-1.

Today’s matchup between the Philadelphia Phillies and Washington Nationals will be their 2nd meeting of the season. Philadelphia has the lead in the series at 1-0. The over-under record in this series sits at 1-0. The average run total in these games is 11.21 runs per game. In these matchups, the average scoring differential sits at 9.0 runs. Last season, Philadelphia picked up the series win, 13 games to 6. The over-under record in last year’s matchups was 11-8, with the average run total being 11.21 runs per game. On average, the winning team won by a margin of 2.58 runs per contest. More Picks: Get our Braves vs. Cubs Best Bet for 6/17/22 >>>

Heading into game 1 of today’s doubleheader between Philadelphia and Washington, I expect the Phillies to pick up the win and cover the runline. The Nationals continue to roll out Joan Adon despite his WHIP now climbing to 1.76. Washington has won just 1 game with Adon on the mound. I expect Philadelphia to swing the bat well vs the Nationals right-hander. Free MLB Pick: Phillies -1.5 Runline. Bet your Phillies vs. Nats and all your MLB bets for FREE this week by taking advantage of a 100% real cash bonus on your first deposit of $100 to $300 when you use bonus code PREDICT100 at MyBookie Sportsbook!