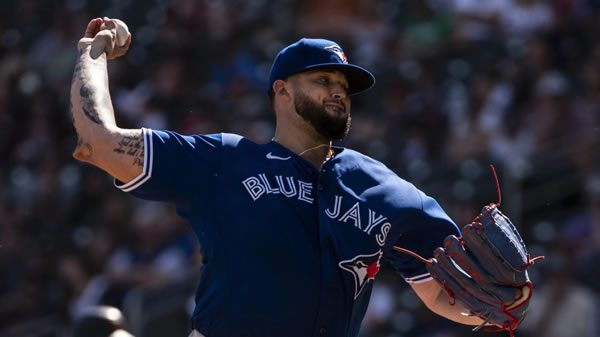 The Toronto Blue Jays host the Boston Red Sox on Friday, September 30th at Rogers Centre. The first pitch in this matchup is scheduled for 07:07 ET. The MLB Odds Board places Toronto as the favorite (-190), with an OU line set at 8.5.

In their most recent game, Boston picked up a 2-run win over Baltimore (5-3). On their way to the victory, the pitching staff gave up 3 runs on 9 hits. The Red Sox lineup had a good night at the plate, coming up with 9 hits, leading to 5 runs. In the matchup, Boston was favored at -155.0 on the moneyline. Through 85 games as the favorite, the team has found the win column at a rate of 59.0%. Combined, the Red Sox and Baltimore fell short of the over-under betting line of 8.5 runs. This outcome pushed Boston’s over-under record further below .500 at 73-75-8.

Toronto will look to move on from a 5 run loss to the Yankees, falling by the score of 8-3. On their way to giving up 8 runs, the Blue Jays staff allowed 11 hits. The Blue Jays’ offense ended the game with just 3 runs on 4 hits. Leading into Toronto’s loss they were the underdogs, getting 105.0 on the moneyline. In their 25 games as the underdog, their straight-up win percentage sits at 44.0%. The Blue Jays and Yankees went over the run total line set at 7.0 runs. For the season, the team’s over-under record is 79-73-4.

In their last 5 games, the Blue Jays have put together a record of 3-2. Their recent success is backed by an average scoring margin of +1 (last 5). Toronto has played above .500 baseball, despite averaging just 3.6 runs in their last 5 games. This is a drop in production compared to their season average of 4.72. On the season, Toronto has won more than half of their series, going 25-16-8.

Nick Pivetta gets the start for the Red Sox, with an overall record of 10-11. So far, Pivetta has put together an ERA of 4.48. In his appearances leading up to today, he has lasted an average of 5.49 innings. Opposing teams have hit the ball well against the right-hander, with a batting average of 0.252. Opponents are hitting for power against Pivetta, as his HR/9 figure sits at 1.32. Per game, Nick Pivetta is averaging 5.42, on a strikeout percentage of 23.0%. Command has been a problem for Pivetta, as he is giving up 3.53 walks per outing.

Toronto will roll with Alek Manoah (15-7) as their starter. In his previous outings, Manoah has lasted an average of 6.34 innings, putting together an ERA of just 2.31. So far, batters are hitting just 0.205 against him. Not only does Manoah have a strong batting average allowed, but he has also avoided giving up home runs. In his previous outings, opponents are averaging just 0.76 home runs allowed per 9 innings. Overall, Alek Manoah has struck out 23.0% of the batters he has faced. On average, he averages 5.87 K’s per game. For the season, he has struggled with command averaging 2.31 walks per outing.

For the season, the Boston Red Sox and Toronto Blue Jays will be playing their 17th game of the season. Toronto holds the edge in the series at 13-3. Through 16 games, the series over-under record is 8-8, with the average run total sitting at 10.05 runs per game. In these matchups, the average scoring differential sits at 4.0 runs. Going back to last year, Boston won the season series, 10 games to 9. The over-under record in last year’s matchups was 9-10, with the average run total being 10.05 runs per game. On average, the winning team won by a margin of 4.26 runs per contest.

Heading into Friday’s AL East showdown between Boston and Toronto, the Blue Jays are the heavy favorite on the moneyline. Look for the Jays to come away with the win, as Alek Manoah has been excellent of late, giving up just 4 runs over his last 4 outings. I like Toronto to win by multiple runs.