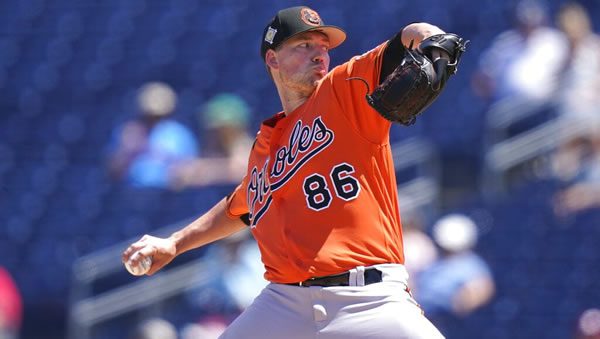 The Baltimore Orioles host the Boston Red Sox on Saturday August 20th at Oriole Park at Camden Yards. The first pitch in this matchup is scheduled for 04:05 ET. The BOV Odds Board places Boston as the favorite (-120), with an OU line set at 9.0.

The Boston Red Sox head into Saturday’s game looking to bounce back from a 15-10 loss. In the game, the Red Sox actually outhit the Orioles at 19-18. The over-under line heading into the game was set at just 9 runs, as this game easily surpassed this number. Boston hasn’t been able to gain any traction of late, going 5-5 over their last 10 games.

The Baltimore Orioles will be looking to continue swinging hot bats, as they put up 15 runs in last night’s game. 9 of their runs came between the 4th and 5th innings. The oddsmakers projected last night’s game to go either way, as each team was at -108 on the moneyline. This season, the Orioles have been tough at home, putting together a record of 38-18.

The Boston Red Sox will send Michael Wacha to the mound with an overall record of 7-1. In his previous outings, Wacha has lasted an average of 5.51 innings, putting together an ERA of just 2.44. Hits have been hard to come by against the right-hander, as his batting average allowed is just 0.205. Home runs have not been an issue for Wacha, as he is giving up just 0.82 HR/9. On the season, Michael Wacha has had no problem racking up strikeouts, posting a strikeout percentage of 19.0%. This includes a per game average of 4.21 K’s per game. Command has been a problem for Wacha, as he is giving up 2.68 walks per outing.

Kyle Bradish gets the start for the Orioles, with an overall record of 1-4. So far, Bradish has put together an ERA of 6.38. In his appearances leading up to today, he has lasted an average of 4.72 innings. Compared to other starters, the right-hander has a high BA allowed of 0.314. Opposing batters have been able to drive the ball with power against Bradish, averaging 1.91 homers per 9 innings pitched. Per game, Kyle Bradish is averaging 4.79, on a strikeout percentage of 22.0%. For the season, he has struggled with command averaging 3.66 walks per outing.

For the season, the Boston Red Sox and Baltimore Orioles will be playing their 11th game of the season. Baltimore holds the edge in the series at 6-4. The over-under record in this series sits at 4-5. The average run total in these games is 10.11 runs per game. The averge scoring margin in these meetings is 4.1 runs. Last season, Boston picked up the series win, 13 games to 6. In these 19 meetings, the two teams combined for an over-under record of 8-11. Last year, the Red Sox and Orioles averaged 10.11 runs per game. On average, the winning team won by a margin of 4.63 runs per contest.

Heading into Saturday’s matchup between Boston and Baltimore, the oddsmakers once again don’t have a strong lean on who will win the game. However, I like Boston’s chance to bounce back with a win, as they have the advantage on the mound. Michael Wacha is coming off a strong outing in which he struck out 9 batters while not giving up a run. I like Boston on the moneyline.

Free MLB Pick: Red Sox Moneyline. NEW! Get a massive 125% real cash bonus up to $400 in free bets and a free point every time you bet your favorite basketball or football team when you use bonus code PREDICTEM at GTBets Sportsbook!