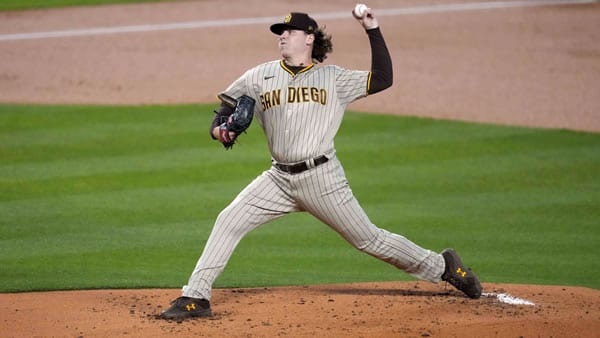 This was supposed to be the series that decided the NL West and sent the loser to the wild card game, but thanks to the Padres’ total collapse, it ended up only mattering for one of these teams. San Diego has been in a complete tailspin as of late and doesn’t seem to have any way out of this situation, as the Padres have lost nine of their past ten games and are down to using a four-man rotation, with one of those four being Vince Velasquez, which has essentially made this a three-man rotation.

And that’s why San Diego is such a massive underdog in this one: the Padres just don’t seem all that interested in even trying in the final week of the season. San Diego bet everything on taking a big step forward this year and instead took a big step back. Even finishing at .500 seems of no interest to this group; this team appears to have simply accepted its destiny and shifted its focus toward trying again in 2022.

Conversely, the Dodgers have everything on the line in this one, as they’re trying desperately to avoid the one-game playoff that is the wild card game. Los Angeles sits two games back of the Giants with just five games left in the season, and the Dodgers are going to need to run the table and get some help to avoid that pressure cooker. With the Giants getting two games with Arizona, even one stumble likely means that San Francisco wraps up the NL West.

As such, the Dodgers want to win, but they want to do it in a way that allows them to set up their rotation for the games that really matter. In all likelihood, Los Angeles will be facing St. Louis in the wild card game, and pitching Max Scherzer here means that he’d be well set up to be either the starter in the wild-card game if the Dodgers need him or the Game 1 starter against the Giants if the Dodgers turn to Walker Buehler.

That makes this a perfect time to take Scherzer’s strikeout total over. As long as the veteran is dealing, he will last long enough to flirt with double-digit strikeouts. The Dodgers don’t want to go to the bullpen if they don’t have to, especially with Scherzer set up to be on full rest for either Tuesday or next Thursday. They’ll let Scherzer go as long as he can so they can protect their bullpen.

San Diego counters with a bullpen game in the person of Ryan Weathers, which is to be expected. When you’re down to a rotation that’s Yu Darvish, Joe Musgrove, and nothing else good, you’re going to need to mix in some bullpen performances.

Unfortunately for the Padres, Ryan Weathers is not the man you want taking the hill in these situations.

Consider this: On one of the spectrum, you have Scherzer, who has seen his team win in his past ten trips to the mound (the Dodgers actually haven’t lost a game in which Scherzer has pitched). On the other, you have Weathers, who has seen his team lose in the past 14 games in which he pitched. Not all of these were Weathers’ fault, of course, but the fact remains that since the end of May, San Diego is 2-17 in games where Weathers pitched.

And that’s before you get into the over, which has gone 7-0-1 in Weathers’ past eight appearances while the Padres have given up eight or more to the opposition in his past six appearances. If you want to see fireworks, Weathers is your kind of pitcher.

It’ll be a perfect night for baseball here, with temperatures at 70 degrees, clear skies, and a five-mile-per-hour wind blowing out to right field.

The Dodgers are playing great baseball, and the Padres have completely given up on the season. The final was 2-1 on Tuesday, but that was also because San Diego had Yu Darvish on the mound. With Weathers, it’ll be a different story. I’m backing the Dodgers on the run line.