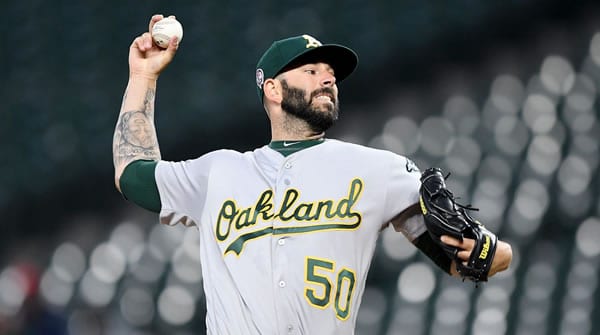 Thanks to Moneyball, everyone’s got the idea of the Athletics as being a team based on getting on base a lot. That might have been true of past Oakland teams, but things have changed in the past few seasons. Oakland’s on-base percentage is still reasonably high despite low batting averages, but the way that the Athletics win in this day and age is by preventing runs.

In other words, Oakland wins with pitching and defense. The Athletics have held 12 of their past 15 opponents to five runs or less, and with Mike Fiers on the mound, runs haven’t exactly been easy to come by for opposing hitters. In his past three starts, Fiers has allowed a combined five runs, and he’s done it without overpowering his opponents. Fiers has only struck out more than four hitters on one occasion this season, yet he’s won three straight starts, and Oakland hasn’t lost when he’s made it through at least the end of the fourth inning.

Fiers has also been notorious for pitching very close to the total this season when the over has hit. In his seven starts, the under has hit four times, and two of the overs were within a run of going the other way. With Fiers coming off his best performance of the year, it might be time to look at the under again.

Swinging Back and Forth

Garrett Richards really hasn’t been able to put together any kind of consistency this season. It hasn’t mattered whether he’s been pitching at home, on the road, or against a quality or weak opponent, Richards has been all over the place as far as his performances have gone. About the only thing that has been consistent is that he hasn’t won or lost consecutive games all season.

Based on the pattern, that means that he’s likely to end up on the losing end of this one, as the Padres put everything together in his most recent start and scored a 6-0 win over Colorado. Richards didn’t get a decision in that game because he only lasted 3.2 innings, allowing just one hit. It seems that might be a conscious decision on the part of the Padres, as Richards hasn’t really pitched well in any of his past three starts, and San Diego is instead opting to turn things over to the bullpen early if things get out of hand. Given that a couple of runs might be enough to win in this matchup, expect that you’ll be dealing with two San Diego pitchers if you take the first five innings bet.

While the Athletics are all about pitching and defense, the Padres have been whacking the ball all season long. Nobody scores more runs than San Diego, which has crossed the plate 233 times in 41 games this season. But it takes more than one team to hit an over, which is why the Padres have actually gone under on four of their past seven outings. Plus, two of those starts, whether the over has hit, belong to Chris Paddack, who’s been getting hit hard recently and has seen the over hit in eight of his nine starts this season. Throw out Paddack, and San Diego’s numbers drop to 14 overs and 18 unders for the year, including four of the past five going under the total.

Left-handed batters will have the edge here, as the wind is blowing five miles to the northwest, sending balls heading down the right-field line on a 94-degree day.

Fiers is pitching well, and Richards really isn’t. That makes me lean toward Oakland’s trends, and Richards’ inconsistency says that he’s likely to follow up the Padres’ win in his most recent performance with another rough outing that leaves his squad coming up short.

Oakland’s run prevention strategy should be able to best San Diego’s offense-heavy approach. Give me the Athletics.