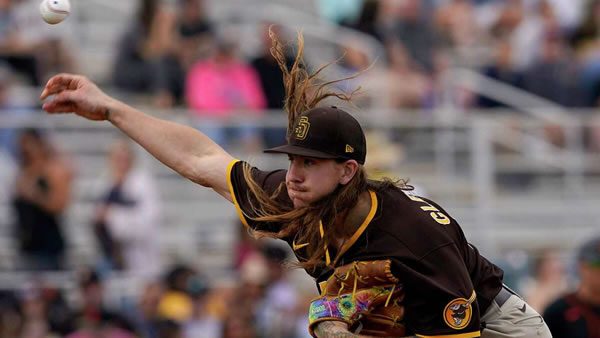 The Philadelphia Phillies host the San Diego Padres on Saturday October 22nd at Citizens Bank Park. The first pitch in this matchup is scheduled for 07:45 ET. The MLB Odds Board places Philadelphia as the favorite (-110), with an OU line set at 8.5.

San Diego heads into today’s action looking to rebound from a 4-2 loss to Philadelphia. On their way to giving up 4 runs, the Padres staff allowed 9 hits. The Padres ended the game with just 2 runs on 7 hits. The Padres suffered the loss, despite being favored at -125.0. Through 123 games as the favorite, the team has found the win column at a rate of 57%. This matchup remained below the over-under line set at 7.5 runs. This outcome pushed San Diego’s over-under record further below .500 at 80-86-6.

In the Padres’ last 5 games, they are above .500, going 3-2. During this time, they have an average scoring differential of +2. San Diego has put together this record, despite averaging just 3.4 runs per game, compared to their season average of 4.34. So far, San Diego has won over half of their 54 series played, going 28-19-7.

Philadelphia is coming off a 2 run win over the Padres (4-2). In the winning effort, the team’s pitchers held the Padres to 2 runs and 7 hits. At the plate, the Phillies only came through for 4 runs on 9 hits. Despite being the underdogs, getting 105.0 on the moneyline, the Phillies still picked up the win. So far, the team has gone into 60 games as the underdog, still finding the win column at a rate of 47.0%. Combined, the Phillies and Padres’ run total fell below the over-under line of 7.5 runs. Philadelphia still has an above .500 over-under record at (87-79-5).

In their last 5 games, the Phillies have put together a record of 4-1. During this time, the team’s run differential sits at +14. Philadelphia is still playing winning baseball, even with their offense averaging just 5.6 runs per game, compared to a season-long mark of 4.62. On the season, Philadelphia has won more than half of their series, going 27-22-5.

Philadelphia will roll with Bailey Falter (6-4) as their starter. Falter gets the start with an ERA of 3.86. On average, he has lasted 4.2 innings per appearance. Teams have been able to rack up runs against him, as he has a batting average allowed of .263. Home runs have been an issue for Falter, as he is allowing an average of 1.71 per 9 innings pitched. Per game, Bailey Falter is averaging 3.7, on a strikeout percentage of 21.0%. Throughout the season, Falter has avoided walking batters, allowing just 1.82 per contest.

For the season, the San Diego Padres and Philadelphia Phillies will be playing their 11th game of the season. Philadelphia holds the edge in the series at 6-4. The over-under record in this series sits at 3-7. The average run total in these games is 8.33 runs per game. In these matchups, the average scoring differential sits at 2.5 runs.

We’re expecting a lot of runs today in Philly! Take the OVER!