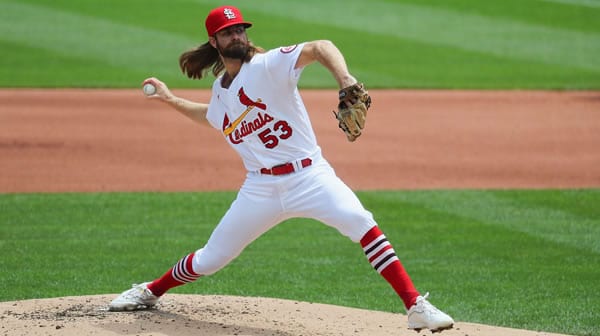 Savvy baseball bettors have seen the trends of “deGrom Day” and “Bieber Fever” for under betting, and Brandon Woodruff appears to be well on his way to joining Jacob deGrom and Shane Bieber in must-bet territory. There’s no creative name yet for Woodruff’s starts, but the results more than speak for themselves, as the Milwaukee ace has seen five of his seven starts end up with six runs or fewer. The two exceptions both went extra innings, and both featured late fireworks to push the score to its final total.

In Woodruff’s most recent start against Philadelphia, everything that’s led to unders cashing when he’s on the mound was on full display. Woodruff was genuinely brilliant through 6.2 innings, making just one mistake for a solo home run in one of the most hitter-friendly ballparks in the majors. Unfortunately for Milwaukee, that one home run was enough to take Woodruff with the loss, because the Brewers never got anything going at the dish. Only once all season has Milwaukee given Woodruff more than three runs of support without the need for extra innings to do it, a large reason why he’s got four no-decisions on the season.

But even with his team’s lack of offensive output, Woodruff has established himself as one of the most reliable starters in the game. His ERA is probably helped a bit by the fact that he’s been able to face the offensively-challenged Cubs three times in 2021, but you don’t get to fifth in the majors in ERA simply by facing Chicago.

Let’s Get It Started

John Gant is back to being a starter after spending 2019 and 2020 coming out of the bullpen, and so far, the Cardinals have seen both the good and the bad from him. On the negative side of the ledger, Gant’s control leaves a lot to be desired. So far, he’s averaging four walks a game, and in the Cardinals’ loss to the Mets, Gant actually gave more New York batters a free pass (six) than he allowed to hit safely (five).

But his ERA is just 2.15, and he’s only given up as many as three runs once all season in a 5-2 loss to the Nationals. What’s more, only one of his six starts, a 7-3 win over the Pirates, saw the teams combine for more than seven runs. So what’s up with that? Simple: Gant’s proven to be as adept at getting out of trouble as he is at getting into it. As a reliever, he didn’t really have time to work out of his issues, but as a National League starter, he’s got no choice but to work out of the situation and keep his team in the game.

The main reason he does that so well is that he’s a ground-ball pitcher who can gt outs quite easily when runners are on base. Gant isn’t the type to miss bats, but when the ball is put in play, there’s a good chance it’s going to a Cardinal glove.

If there’s one player who might be able to break these teams out of their offensive doldrums, it’s probably going to be Paul Goldschmidt. For whatever reason, the Cardinals’ first baseman seems to absolutely loves facing off against the Brew Crew, as he’s hit .294 or better against Milwaukee in three of the past four seasons.

But it goes beyond that for Goldschmidt, who has also proven himself capable of putting up some healthy power numbers at the plate when Milwaukee is the opponent. In 2019, Goldschmidt launched 10 of the 34 home runs he hit all season off a Milwaukee pitcher, and he was back to his old ways on Tuesday night in extra innings. A homer might not come against Woodruff, who has only given up two home runs in 2021 and has held Goldschmidt to a career .200 average when they’ve faced off, but the Milwaukee bullpen remains very vulnerable to the possibility of Goldschmidt again torturing them in the late innings.

With temperatures at 56 degrees, the Brewers might opt to close the roof and take weather out of the equation. If the roof stays open, the wind will be blowing in from right-center, heading southeast at eight miles per hour.

Woodruff has been outstanding this year, but Milwaukee’s bats are ice-cold right now. The Brewers have scored two runs or less in four of their past five games, and Woodruff can’t really do a lot about his team’s ability to hit. Gant will give Milwaukee chances, but I question whether the Brewers will be able to take advantage of them.

The bet that I really want out of this game is the under, as I think Woodruff handcuffs the Cardinals for six innings and holds St. Louis to two runs or less. But with the Brewer bullpen proving less than reliable, I’ll take a shot with St. Louis as a live dog in a low-scoring game. Bankroll need a boost? Instead of reloading for NOTHING at your book, you may want to consider maximizing your loot by grabbing a 100% REAL CASH bonus on your first deposit of $100 to $1000 at BetNow! The biggest real cash bonus from a legit book on the entire internet! Click here to get yours now!