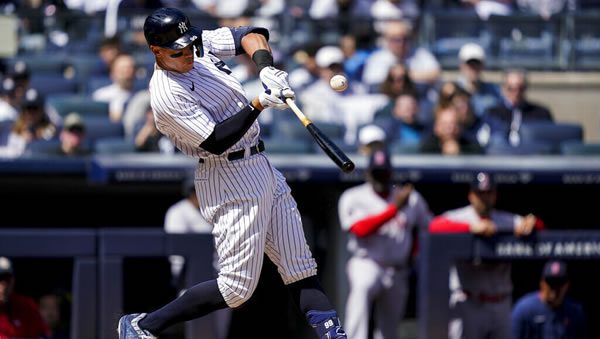 The New York Yankees host the Kansas City Royals on Thursday, July 28th at Yankee Stadium. The first pitch in this matchup is scheduled for 07:05 ET. The MLB Odds Board places New York as the favorite (-230), with an OU line set at 9.0.

The Royals are hoping to get back on track after falling to the Angels by a score of 4-0. Kansas City’s pitching staff finished the game by allowing 9 hits, leading to 4 runs. Offensively, they finished with just 0 runs on 7 hits. Royals suffered the loss, despite being favored at -130.0. So far, the team has been the favorite in 30 of their games, winning at a rate of 53.0%. Together, the Royals and Angels stayed below the over-under line set at 8.5 runs. So far, Kansas City has been a good candidate to fall below the betting line, as their over-under record sits at just 46-48-4.

In the Royals’ last 5 games, they are above .500, going 3-2. During this time, they have an average scoring differential of +2. Overall, Kansas City is averaging 3.87 runs per game. Over their last 5 contests, they have been producing at a similar rate, at 3.87. Kansas City’s overall series record is just 9-19-3.

The Yankees will look to bounce back from a tight 3-2 loss to the Mets. For the game, the pitching staff held the Mets to 3 runs on 9 hits. The Yankees offense ended the game with just 2 runs on 7 hits. This loss came as no surprise, as New York came into the game as the underdog, getting 165.0. In their 8 games as the underdog, their straight-up win percentage sits at 50.0%. With this result, the Yankees and Mets combined to fall below the over-under line of 7.5 runs. Even still, New York games have still gone over the betting total over half of the time, at 49-48-2.

In their last 5 contests, the Yankees have just 2 wins, going 2-3. During this time, the team has a run differential of 0. The team’s offense is partly to blame for their recent slump, as they have averaged just 4.2 runs over their last 5 game. On the season, New York has won more than half of their series, going 22-6-5.

The Kansas City Royals will send Brady Singer to the mound with an overall record of 4-3. To date, Singer has an ERA of 3.94 while lasting an average of 5.15 innings per appearance. Teams have been able to rack up runs against him, as he has a batting average allowed of 0.253. Opponents are hitting for power against Singer, as his HR/9 figure sits at 1.28. In terms of strikeouts, Brady Singer has a strong strikeout percentage of 25.0%, including a per game average of 5.4. In his previous outings, walks have been an issue, as Singer averages 2.32 free passes per outing.

Jameson Taillon gets the start for the Yankees, with an overall record of 10-2. To date, Taillon has an ERA of 3.93 while lasting an average of 5.42 innings per appearance. Opposing teams have hit the ball well against the right-hander, with a batting average of 0.259. Opposing batters have been able to drive the ball with power against Taillon, averaging 1.22 homers per 9 innings pitched. Per game, Jameson Taillon is averaging 4.42, on a strikeout percentage of 20.0%. Taillon has done a good job at limiting walks, averaging just 1.31 per contest.

For the season, the Kansas City Royals and New York Yankees will be playing their 4th game of the season. Currently, New York is winning the season series 3-0. Through 3 games, the series’ over-under record is 2-1, with the average run total sitting at 10.67 runs per game. The averge scoring margin in these meetings is 5.0 runs. New York won last year’s head-to-head series, grabbing 4 wins to 2. The over-under record in last year’s matchups was 4-1, with the average run total being 10.67 runs per game. On average, the winning team won by a margin of 3.0 runs per contest.

Heading into Thursday’s American League showdown between Kansas City and New York, the Yankees are the heavy favorite to come away with a win. However, I recommend taking the Royals to cover the runline. For aggressive bettors looking for a big payout, it is worth taking Kansas City on the moneyline. Royals starter Brady Singer always gives his team a shot to win, as they have now won 4 straight games with the right-hander on the mound.

Free MLB Pick: Royals Runline. Football is coming! Be sure to check out our list of Football Handicapping Contests!