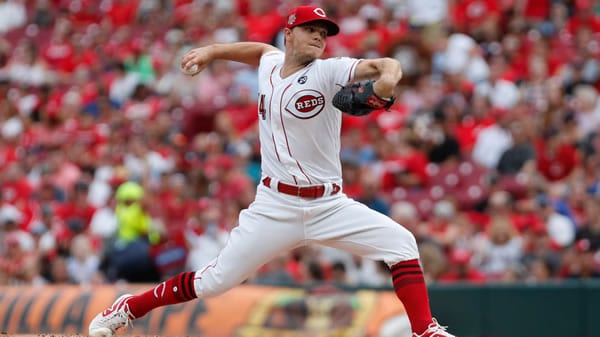 The last time we saw Sonny Gray on the mound, we saw a Sonny Gray that even he wouldn’t recognize. Gray looked lost and helpless over a mere 2/3 of an inning as St. Louis battered him for six runs on five hits in a 16-2 rout. For the most part, Gray has been the main man for a Reds pitching staff that’s been badly overworked. He’s given Cincinnati a chance to win on most nights, and the disaster against the Cardinals was the first time all season that he hadn’t managed to pitch through the fifth inning.

History says that Gray shouldn’t be anywhere near that bad a second time. The last time he had anything close to a bad start, a 9-3 loss to Milwaukee on August 9, he bounced back by holding the Pirates to one run over 6.2 innings in a comfortable Cincinnati victory. Obviously, the first-place Cubs should be a more formidable challenge than the bumbling Pirates, but Gray should still be a good bet to hold Chicago’s offense down for at least the first five innings. However, after that, it’s likely that all heck breaks loose given the Reds’ inept bullpen and their tendency to give Gray a fair amount of run support. Despite him being the Reds’ best starter, the over has been the way to bet when it comes to Gray’s starts, as it has hit in six of eight appearances this season.

The Cubs were seen as likely to take a step back this season before COVID hit, and now that we’re nearing the end of the schedule, it seems like time is starting to catch up with Chicago. Over their past eight games, the Cubs are just 3-5 and have managed to plate a mere 18 runs during that stretch. If you’ve been betting the Cubs to go under in September, congratulations are in order, because the under has now hit in seven of the Cubs’ past eight contests, with one push in there during Alzolay’s most recent start.

Chicago has the pitching to carry it through the season with Yu Darvish, Jon Lester, and Kyle Hendricks getting the job done on a nightly basis. Still, in recent games, the Cubs have turned into the National League’s version of the Indians: outstanding pitching but little to offer at the plate. The books almost can’t set the total low enough on Cubs games right now: six of the Cubs’ past seven games have featured six runs or less, including the one push.

For all of its struggles this season, Cincinnati is still playing with enthusiasm and hope. The Reds really have little choice but to make a push toward the postseason, as Nick Castellanos, who has been Cincinnati’s top RBI man this year, can opt-out of his contract after this season. The Reds have to show enough to keep Castellanos around if they want to make that acquisition count long-term, and the best way to do that is to get a postseason bid in this crazy season.

The Reds are definitely the last team that a high seed wants to see in the first round because Cincinnati has the pitching to dominate a three-game series and send a top seed home with their season in ashes. But the Reds have to make it there first, and that’s going to be a tall order if they don’t string some wins together soon.

I don’t care what number they put on the board here; I’m taking the under with the Cubs not hitting and Gray pitching with a strong wind at his back. This should be a low-scoring contest, and that’s precisely the kind of game that Cincinnati can win and does win more often than not. Give me the Reds. Want more free bets? Deposit anywhere from $100 to $500 and get a 100% dollar for dollar match (real cash bonus; not a match play!) at GTBets Sportsbook!