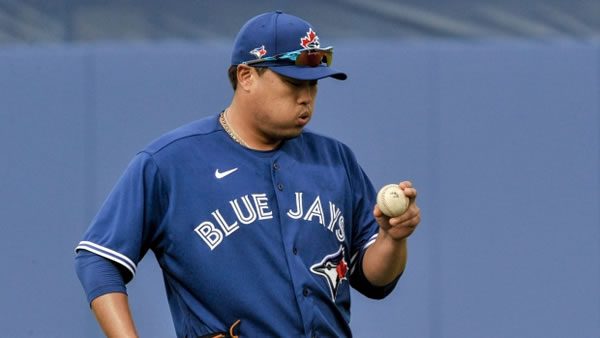 The start of the season was a royal mess for Hyun-Jin Ryu, who started the year with both Texas and Oakland teeing off on him in a pair of defeats. After the loss to the Athletics, Ryu went on the DL and stepped away from the Blue Jays, with the team stating that a forearm injury was the issue.
It turned out that might actually have been accurate, as Ryu has looked much better since he returned three weeks ago. Against Tampa Bay, Cincinnati, and the Angels, Ryu has given up a grand total of three earned runs in 14.2 innings after giving up 11 earned runs in seven innings to the Rangers and Athletics, neither of whom are known for hitting well. Only once in his past three starts has Ryu not made it out of the fifth inning, suggesting that he’s fully recovered from his injury and is back to the pitcher the Blue Jays have come to count on since he joined the team.

After going through Tommy John surgery in 2019, Michael Kopech made the decision to take off 2020 rather than play during the worst of COVID, leaving him stuck building up endurance in 2021 and getting back to becoming a full-time starter. He’s back in the rotation in 2022, and he’s been more than up to the challenge. In April, Kopech wasn’t the kind of pitcher who would go all that deep into games, pitching five innings and then calling it a day. But he’s gone six innings or more in each of his past three starts and has given up just four hits and three runs in his past 20 innings of work.
Turning contact into outs has been how Kopech has thrived in 2022; his issue has been that he’s occasionally his own worst enemy when he tries to paint the strike zone a little too finely. Against the Yankees two weeks ago, Kopech was excellent at keeping New York from hitting safely, as he held the Yankees to just one hit in six innings. But the problem was that he walked four batters in one inning, forcing in two runs and allowing a third to score when he uncorked a wild pitch. Those were the only runs he’s given up in the past 20 innings, which shows just how strong Kopech has been at times. If you can’t wait him out, you’ll have a tough time scoring.

The White Sox’s saving grace is that they play in the weak AL Central, which features several easy wins in the persons of Detroit and Kansas City. But there’s no hiding the fact that Chicago has been one of the year’s biggest disappointments and is starting to look like it might not get this thing figured out in time. At 23-24, not only are the White Sox five games back of Minnesota in a division they were supposed to win going away, but they’re also staring up at the likes of the Texas Rangers in the AL wild-card chase. That’s to say nothing of the fact that they’re trailing Toronto for one of the three wild card spots by 4.5 games.
Chicago remains a talented team, but the White Sox’s bats just have not gotten going this season, as they have a mere 172 runs to their name on the season. Only Detroit’s pathetic offense has been anywhere near as weak as the Pale Hose, who just haven’t come up with the ability to put together enough runs to avoid sinking to mediocrity. With this being one of the more anticipated seasons for White Sox fans, failing to at least get to the playoffs would be a catastrophe for this team and fan base.

With wind moving at a mere two miles per hour toward the left-field foul pole and temperatures at 68 degrees in Toronto, don’t expect the weather to play any kind of role in this game.

With how well Ryu is pitching as of late and how much the White Sox have struggled to score runs against left-handers, the numbers all point to Toronto being the way to play this. The Jays have been the more consistent of the teams, and the White Sox tend not to pull too many upsets. When they’re not expected to win, they usually do not.

I think Kopech keeps them close, but his control issues bite them here. Give me the Jays.