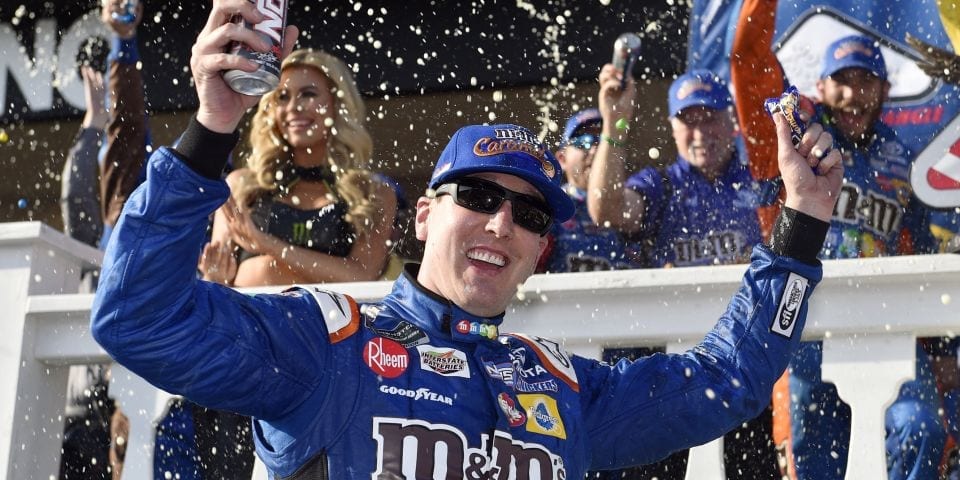 Kyle Busch came away with the win this weekend at Auto Club Speedway, accomplishing a feat few have managed. Busch came away with his 200th win in the NASCAR Series. That beingsaid, it’s interesting that there are many many differences in this achievement comparing Busch to, say, Richard Petty. I don’t think that it’s even fair to compare the two like many other analysts and the media outlets are doing. We are talking about generational separations here when it comes to the cars, style of racing, and drivers overall. There is no doubt that Kyle Busch is an extremely talented driver. But could he have managed to do it under the terms that Richard Petty had to? We will never know. What we do know is that Busch has 53 wins in the Cup Seriesthus far, 94 in the Xfinity Series, and another 53 in the truck series. Busch came away with this historic win after outrunning the Penske drivers. Joey Logano and Brad Keselowski battled forward all day long, with Brad having to run through the field. His 3rd place finish is actually quite impressive under the circumstances. Joey Logano almost had Kyle on a few occasions, but it was clear that Busch’s Toyota was just a touch better than Logano’s Ford at the end. Kevin Harvick, who we had picked to win at TG 500, and Ryan Blaney rounded out the top 5 spots, making quite a showing for the Fords.

Kyle Busch making his 200th victory may have been the best part of the race. It was a ho-hum boring race yet again in my opinion. NASCAR said that this aero package was supposed to bring the cars closer together, but unless the cars were on a restart, there was a HUGE gap between any of the positions. Joey Logano was making small gains on Busch in the closing laps, but that was only due to lap traffic. If you take a look at the competition in the top 10 positions, you’d find that there was an 18 second gap between 1st and 10th. That’s pretty pathetic. There was an 8 second gap between 1st and 4th. If we’re being honest, what kind of competition is that? I’m not sure if anyone at NASCAR is actually watching these races or if they’re too busy reminding drivers to show their vouchers after they test at the wind tunnel, but someone needs to pay attention. This sport is coming to a screeching halt if NASCAR continues this trend. They need to stay away from all of this regulating and making all of the cars the same and focus on how they can make a more competitive race where the drivers are actually using their skills on and off the track. This is STOCK CAR racing lest the organization forget. This is not IRL or any other type of racing. The exec s needs to rethink their current state of the sport.

This weekend, we are headed to one of my favorite races of the Series. It’s a short track weekend, which means we won’t have to begrudgingly watch the drivers space out all over the track and pull away from the leader. Martinsville is one of the most competitive tracks in terms of drivers really battling throughout the entire track. There isn’t some newfangled aero package that NASCAR is going to implement to somehow make short track racing better. A good portion of these drivers came from dirt, and that’s very much what Martinsville resembles. It is actually the shortest track on the circuit. Founded in 1947, Martinsville is rich in NASCAR history. The “Paperclip”, as it is affectionately known, is a 0.526 mile asphalt track with 12 degree banking inthe turns and 0 degrees on the straights. That type of configuration is tough on the cars as the drivers have to dive into the corners hard on the brakes and come out with their foot to the floor. They put a lot of stress on the motors and the brake systems when they’re here. Just ask Jeff Gordon. He’s one of the kings of this track. He knows what it takes to get around here and win, even with an equipment failure. That being said, this track does not lend itself to rookie drivers. That’s not to say that a young driver can’t win, but this is generally quite a large learning experience for them. There’s a lot of lap traffic for these guys to meander through. On top of that, qualifying well is a tremendous advantage in terms of pit stalls. Martinsville pit road is tight. It’s very difficult to maneuver and to keep yourself out of trouble. Pit road penalties are plenty here, that’s for certain!

Picking winners is best done with leveraging our veteran drivers and their stats here at Martinsville. Quite frankly, Kyle Busch is the driver to beat. At 8-5 odds, he’s very clearly the favorite. He’s a second place finisher here in this race last Spring as well as a winner in the Fall. He’s lead a total of 937 laps in just the last 7 races alone. There’s no denying that those are very clearly the best stats of any active driver. Coming off a win from last weekend, Busch is going tobe on fire. He’s a dominant and defensive driver here as well, which is something that is requiredat Martinsville to be successful. Let’s take a look at your potential winners heading into this weekend’s race:

Ryan Blaney is doing better and only seems to be progressing and coming into his own as the season progresses. He has always seemed to do well at Martinsville and has a knack for this track. He actually led 145 laps in this race last time. Overall, his short run speed is his best quality moving forward. Look for Blaney to be at the front of the field this weekend. His payout will be pretty nice if he does manage to pull away with the win at 20-1 odds. He will undoubtedly have some tough competition from both Hamlin and Busch. Hamlin has led laps in every race he’s run here except one and has 6 top 10 finishes in his last 9 starts. That’s not too shabby. Hamlin is currently sitting in 4th place in the standings, and this weekend will likely only further elevate that position.

This weekend will definitely be difficult for some drivers. I think that we’re going to see some dives in the points for some drivers, as there are frequently catastrophic losses here. Pileups happen often and usually involve quite a bit of damage and quite a few cars. I’m excited to see some quality racing this weekend as we head away from the West Coast and off of those intermediate tracks for a weekend. Martinsville rarely, if ever, disappoints. Stay tuned for an exciting weekend of short track racing at Martinsville Speedway!